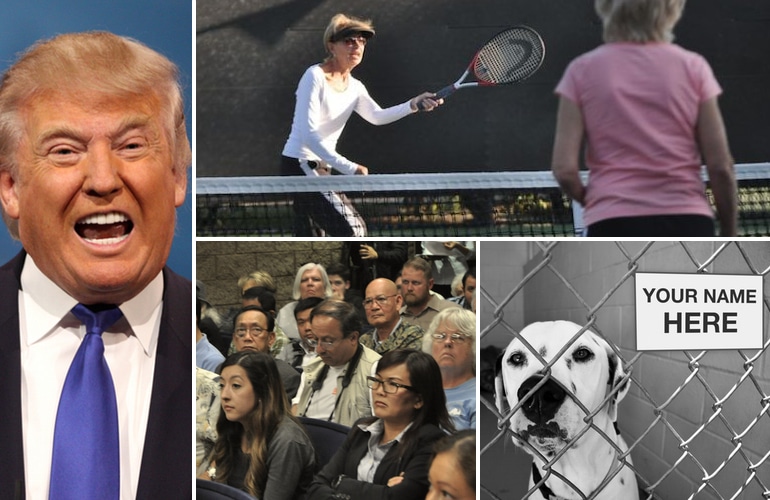 This week, Orange County supervisors will likely give final approval for the purchase of a bus depot that could help alleviate homelessness; the Garden Grove City Council will give residents a final chance to weigh-in on new proposed voting districts; and an Anaheim councilwoman is scheduled to condemn Donald Trump for his “divisive rhetoric.”

Here is a rundown of these issues and others that are on public meeting agendas this week:

With the homeless population at the Orange County Civic Center continuing to be in the hundreds, county supervisors are slated Tuesday to take a potential step toward alleviating the problem by giving final approval to the $3.3 million purchase of an abandoned bus terminal that’s been temporarily used as an emergency homeless shelter.

Although the space was used as a temporary homeless shelter during El Niño rains in recent months, county officials have yet to come up with specific plans as to how they will utilize the property in the future.

The purchase comes as the county is undergoing a leadership transition for its lead staff member on homelessness. Their longtime point person, OC Community Services Director Karen Roper, is slated to officially retire on Thursday. And at a supervisors meeting last month her deputy, Julia Bidwell, introduced herself as the interim director of the department.

The county is also reportedly very close to hiring a “homeless czar,” who would lead countywide efforts on homelessness and report directly to the Board of Supervisors.

County supervisors are slated to get an update Tuesday on efforts by county staff solicit corporate sponsorships for a range of things, including pet food, dog shelter kennels, and hygiene kits the county hands out to homeless people.

A marketing plan for attracting corporate sponsors was approved about a year ago, and so far has resulted in sponsorships of pet adoption events at the county shelter from the Anaheim Ducks hockey team and TV stations NBC and Telemundo.

Animal shelter officials are still trying to get a pet food supplier to sponsor the chow at the shelter, according to a staff report.

The county has also obtained product discounts for people in a low-income family program and helped raise money for county libraries.

In addition from the update from staff, supervisors are also slated to approve a revised marketing plan that also includes the county parks system.

(Click here to see the entire agenda for Tuesday’s Board of Supervisors meeting).

The Anaheim City Council Tuesday night is scheduled to discuss the man everyone else in the country has been talking about for months: Republican presidential candidate Donald J. Trump.

Trump is on the Anaheim Council agenda because Councilwoman Kris Murray, a fellow Republican, is proposing the council officially condemn Trump’s “divisive rhetoric.” Trump’s insurgent campaign began with calling Mexican immigrants rapists and murderers, and he has called for killing the families of Islamic State terrorists.

Murray’s resolution emphasizes the importance of elected officials taking a stand against hateful speech. It also highlight’s Anaheim as majority Latino and home to “one of the largest Muslim populations in the country” with “a significant population of immigrants and refugees.”

The resolution goes on to describe Trump’s comments as “contrary to the fundamental principles of the State of California and U.S. Constitutions and as not being reflective of the City of Anaheim’s guiding principles of inclusiveness and kindness.”

Anaheim council members are also set to consider a proposal to oust the Anaheim Tennis Center’s private operator and have city staff take over running the facility.

Councilman Jordan Brandman’s proposal is aimed at concerns that the city’s controversial, multi-million dollar renovation of the tennis center will benefit a private businessman rather than the public interest.

Brandman’s proposal is unlikely to satisfy Mayor Tom Tait and Latino residents who say the renovation is a prime example of how an all-white city council is tone deaf to the needs of a majority Latino city.

When news of the project first broke, the tennis center project was the most expensive parks expense in the city budget.

Members of the council majority contend that they have no choice but to go forward with the project because of an agreement with the operator that requires the city to pay for the renovations. They also disagree with the opponents and say the tennis center is a valuable community space.

The Garden Grove City Council Tuesday night will hold their last public hearing before voting on a electoral district map, selecting from five maps submitted by the public and their paid consultant, David Ely.

So far, there is division between a coalition of Vietnamese and Latino districts who want to see four districts with strong ethnic majorities, and residents who want to make sure the maps don’t divide the central part of the city where residents have had a history of organizing.

While both sides have each created their own version of a compromise map, they still don’t see eye-to-eye.

Garden Grove council members will also consider whether to enter into a 10-year contract with the county to continue to provide shelter services for the city.

Recent concerns about the contract’s rising cost prompted staff to propose an alternate contract with the Orange County Humane Society for shelter services, an option which would require the city to bring licensing and animal control services in-house.

Garden Grove is the third-largest user of OC Animal Care services and would be required to pitch in an estimated $4.1 million toward the cost of the new county shelter. Rancho Santa Margarita and Laguna Hills are considering leaving the county shelter, while the Lake Forest City Council last week, in a narrow 3-2 vote, decided to stick with the county’s animal services.