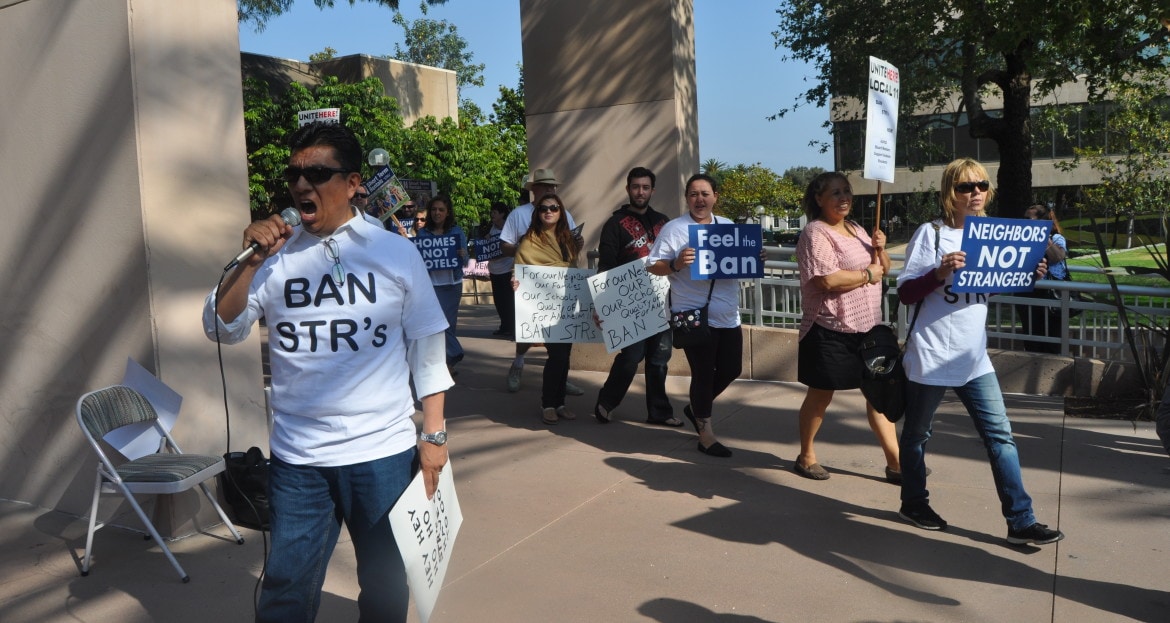 Residents protesting short term rentals, which have fed off a tourist economy and home sharing sites like Airbnb, march in front of Anaheim City Hall.

After a marathon special meeting that included four-and-a-half hours of public comment, the Anaheim City Council Wednesday night passed a ban on short-term rental homes, which have mushroomed in the areas around Disneyland in recent years and pitted neighbor against neighbor.

The council action, which passed on a 3-2 vote, gives the city’s 363 permitted short-term rental operators 18 months to phase out their businesses.

“There’s a difference between a home and a house. A short-term rental is no longer a home,” said Mayor Tom Tait, who along with councilmen Jordan Brandman and James Vanderbilt, voted for the ban. “[and] it’s homes that make up the fabric of a neighborhood.”

Councilwomen Kris Murray and Lucille Kring voted against the ban. Murray was in support of a ban, but voted against the ordinance because she believed operators should have more time to phase out their businesses.

The vote drew both tears and applause from stunned onlookers, the end of an emotional and contentious meeting where members of the audience frequently jeered and heckled speakers from the other side.

The public comment period was a study in contrasts — drawing testimony from more than 150 residents and operators who have clashed for years over the growing number of rentals, fueled by websites like Airbnb and VRBO, that have drawn tourists and out-of-town vacationers to residential neighborhoods.

Short-term rentals have become popular in recent years as an adventurous and intimate alternative to hotel stays, and have exploded in destinations like Anaheim where Disneyland has ensured a steady and year-round influx of vacationers.

Operators, and some of their supportive neighbors, told stories about renovating once run-down homes that now beautify neighborhoods; families with children with disabilities or severe food allergies finally being able to find an accommodating place to vacation; and new economic opportunities that have changed their lives.

They argue that short-term rental owners who allow disruptive behavior give the majority of owners a bad name.

“It wasn’t until [my wife] started working for a short-term rental company that we’ve been able to start a family,” said Eric Nolan, whose wife supervises cleaners for a rental company. “There aren’t a lot of jobs where she can be a stay-at-home mom.”

Residents who pushed for the ban, meanwhile, have long complained that the vacation homes are disruptive, lowering their quality of life and turning residential neighborhoods into an extension of the Anaheim’s resort district.

“I don’t plan on spending the rest of my life monitoring, documenting and reporting short-term rental violations. We didn’t sign up for that when we bought our houses,” said Steve Ackerman. “It doesn’t matter how many pages of regulations you have – how do you create a community when your neighbors change every three days?”

Opponents also argue that the explosion of rental homes has contributed to a housing shortage by limiting the number of houses available to permanent residents.

Frank Jones, a valet runner at the Disneyland Hotel, said he is forced to live outside the area, and at times must sleep in his car when he can’t make it home.

“I tried to look for a house in Anaheim, but the least expensive place I could find was $1,600 a month, much higher than I can afford,” said Jones.

The debate also drew the attention of resort business interests and labor unions for hotel and resort workers such as UNITE HERE , which argue the short-term rentals take jobs from resort workers.

Yuval Miller, an attorney for Orange County Communities Organized for Responsible Development (OCCORD), said regardless of how short-term rentals are managed, they harm the lives of long-term residents.

“There are two categories of harm at issue here. The first category is overt, offensive harm – noise, mess, strangers talking to your children,” Miller said. “The second is an insidious, structural harm, the absence of long-term residents who join the neighborhood.”

The same argument, however, was made by house cleaners, contractors and other people, including many Anaheim residents, who depend on short-term rental companies for their livelihoods.

“The people that are working for hotels, they’re not losing their jobs, we are,” said a woman who only identified herself as Brenda, whose family works for a short-term rental company.

The city first began regulating short-term rentals in 2014, with the passage of an ordinance that required a $250 annual permit for residential rentals between three and 30 days.

After the passage of that ordinance, the number of rentals doubled from 200 to 400, prompting a backlash from residents and the passage of a moratorium on new permits in September 2015.

At their meeting Wednesday night, council members weighed two ordinances that would decide the future of the city’s short-term rental policy.

The one that passed imposes a complete ban on short-term rentals and give owners a period to phase out their businesses, with the intent of giving them time to recoup any losses.

An attorney for the Anaheim Rental Alliance, a group representing short term rental owners, argued that the city owes short-term rental operators what’s called an amortization period to recoup their losses, based on their legal right to be compensated for funds they invested into a property under a city permit. The alliance pushed for a phase-out period between ten and fifteen years.

“The city owes the same legal duty to STR owners as it owes to anyone else who receives a permit and vested a reliance on that permit,” said attorney Jane Usher, who called the 18-month period ultimately approved by the council “burdensome and oppressive.”

The other ordinance would have maintained the moratorium on new short-term rental permits and added a number of regulations for operators, including quiet hours, limits on occupancy, increased fines, a process for revoking permits, and mandatory fire safety renovations.

That ordinance passed unanimously, which means that, in addition to the permanent ban, current short-term rental owners will need to implement the regulations during the 18 month period before the ban takes full effect. No new permits will be issued by the city.

Kring called many of the regulations “draconian,” including requirements to install fire sprinklers in all rental homes and prohibitions on guests parking on the street.

“You have people who are vindictive and go around taking pictures of every little minor violation and then they say the city is not following the law,” Kring said. “Why can’t their guests park in front of their house – we all park in front of our houses. I think that’s very cumbersome.”

Kring also pushed back at arguments that short-term rentals have taken jobs from hotel workers.

“These are entrepreneurs that have wonderful businesses. A lot of them are saving for their kids’ college,” said Kring. “The hotels in Anaheim are at 80 to 90 percent occupancy.”

Wednesday’s vote did not address home-sharing for residents who want to rent rooms in their home to visitors. That issue will be addressed separately at a meeting in August.

“I think what we’re doing tonight is going to come back to haunt us. This meeting is very sad for me,” said Kring.

After the meeting, many short-term rental owners were stunned, crying outside the council chambers.

For the residents who supported the ban, including Latino activists with OCCORD and the hotel workers’ union, it was a hard-fought victory for their neighborhoods.

“We are finally reaping the benefits of district elections. The changes we made in this city will last for generations,” said Ada Briceno, chair of OCCORD’s Board of Directors, and secretary-treasurer for UNITE HERE Local 11.

Some of those activists spoke of unseating Kring in the next election.

“It’s our job to be vigilant,” Briceno said to protestors after the vote. “Because the other side will push back, twice as hard.”

Correction: A previous version of this article mistakenly stated the ordinance to regulate short-term rentals was overridden by the ban. The regulations will apply to short-term rental owners during the 18-month period before the full ban takes effect. The article has also been updated to clarify the City Council vote.