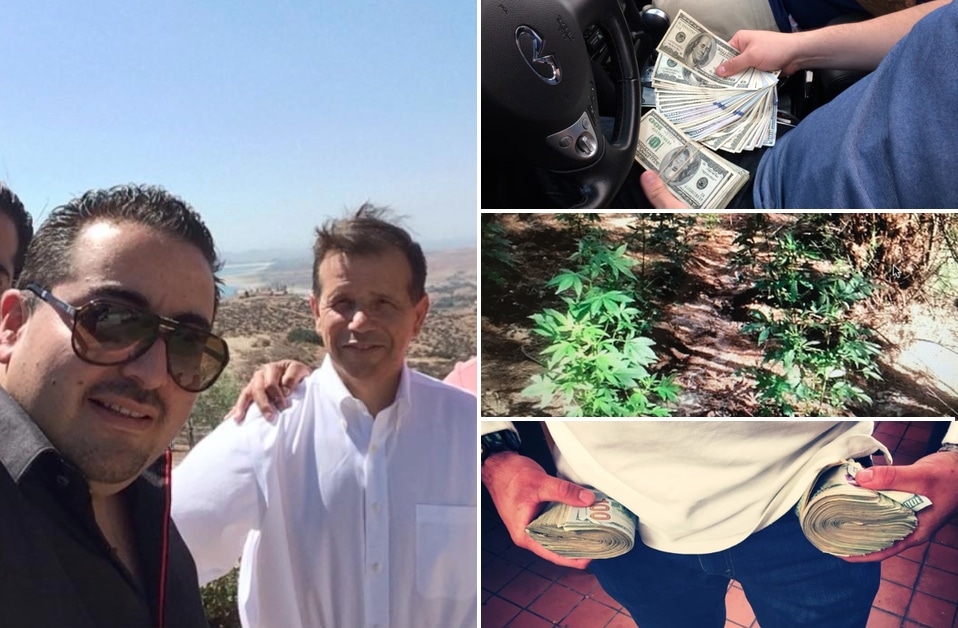 Locals call them the Mexican seafood version of “Hooters” – but with a narco twist.

They are the Mariscos Hector restaurants — where busty young women wearing tight-fitting shirts serve a heavily working-class Latino clientele while Mexican ballads, known as narcocorridos, blast out in the dining rooms and heap praise on infamous drug lords like Joaquin “El Chapo” Guzman.

The purported proprietor of the new Hector’s on Broadway in Santa Ana is one Diego Olivares — a man who seems to have lived the life Mariscos Hector’s glorifies. In the late 1990s he was convicted of orchestrating a cocaine trafficking operation to move 81 lbs. of cocaine across the border from Mexico, according to federal court records, an amount worth upwards of millions of dollars on the street.

Records also show Olivares being busted on methamphetamine charges in 2007, and the records refer to him possibly engaging in “alien smuggling” and kidnapping his girlfriend. He was a confidential informant for the federal Drug Enforcement Administration during this time and may have remained an informant as recently as 2009, according to the records.

While the court records indicate Olivares has stayed clear of the law in recent years, a tour through his and his friends’ social media profiles reveals a man still immersed in the narco subculture. In photo after photo Olivares and his buddies are partying and flashing wads of $100 bills. One photo shows a gold-plated gun, and another an outdoor marijuana grow operation.

And amidst all the photos of guns, drugs and cash, is a familiar face: Mayor Miguel Pulido. 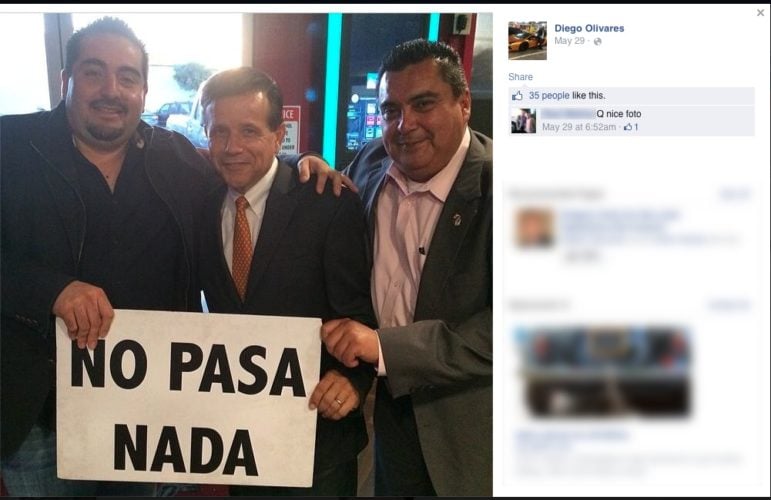 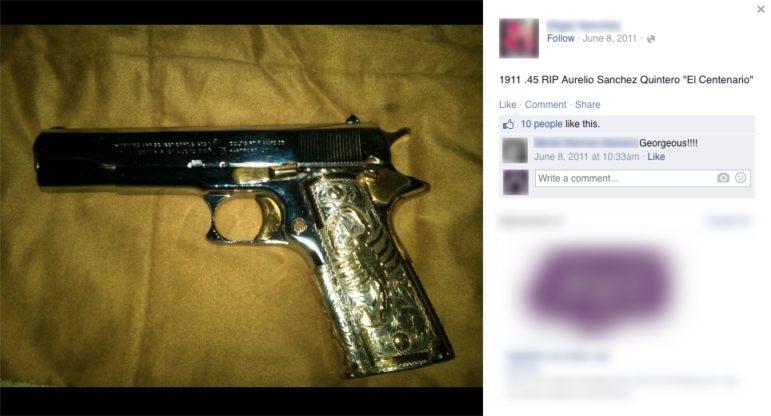 A picture of a gold-plated gun posted on the Facebook page belonging to a friend of Diego Olivares. 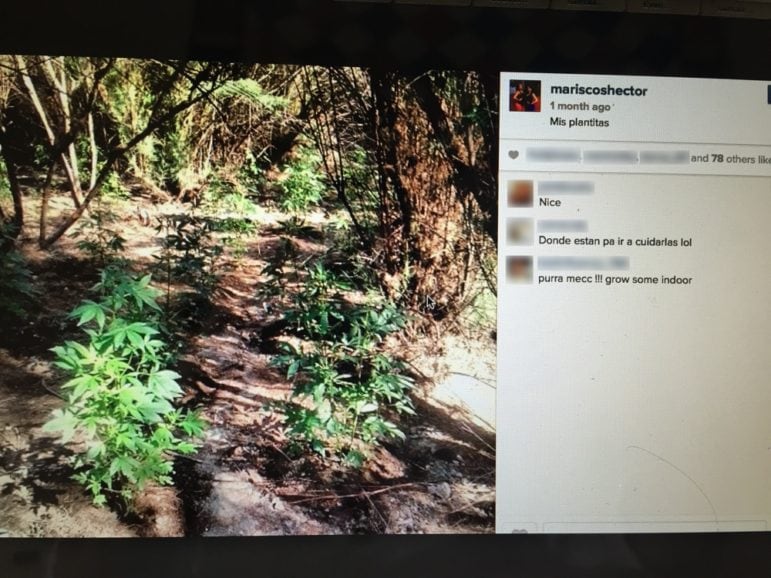 A picture of a marijuana grow operation on the Mariscos Hector Instagram page. “Mis plantitas,” Spanish for “my little plants,” was written as the description.

Pulido has appeared in video promoting the restaurants.

He’s also seen in photos a number of times with Olivares and his friends — attending parties at a ritzy mansion, having dinner together and at the planning counter at City Hall. Olivares sat at the mayor’s table during Pulido’s state of the city address last year, and Pulido’s own Facebook page had at one time as its background photo a group shot that included Olivares. 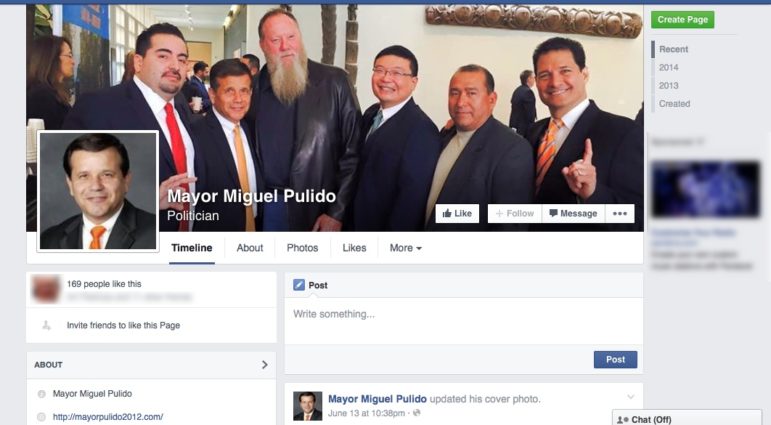 Mayor Miguel Pulido poses in a group photo with attendees of his 2015 State of the City Address. From left: Diego Olivares, Pulido, Mike Harrah, Thomas Lin, and two other men.

Also in that photo and others with Pulido is Thomas Lin, a middle-aged Monterey Park-based doctor who is now sitting in a Los Angeles County jail for Medi-Cal fraud and illegally prescribing diet pills. Olivares and his friends call Lin “El Chino Antrax,” a reference to a Mexican drug lord with the same nickname. 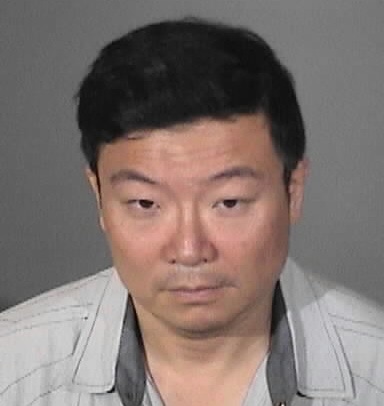 Another indication that Pulido is close to the restaurant came up earlier this month when Democratic presidential candidate Hillary Clinton was scheduled to appear at Hector’s on Broadway, according to a source close to the Santa Ana Police Department. Pulido is known to have high-level Democratic party connections.

For reasons unknown, Clinton instead appeared at another restaurant down the street. Olivares was able to attend the exclusive event with “community leaders” and snap a selfie with the former Secretary of State that he posted on his Facebook page. 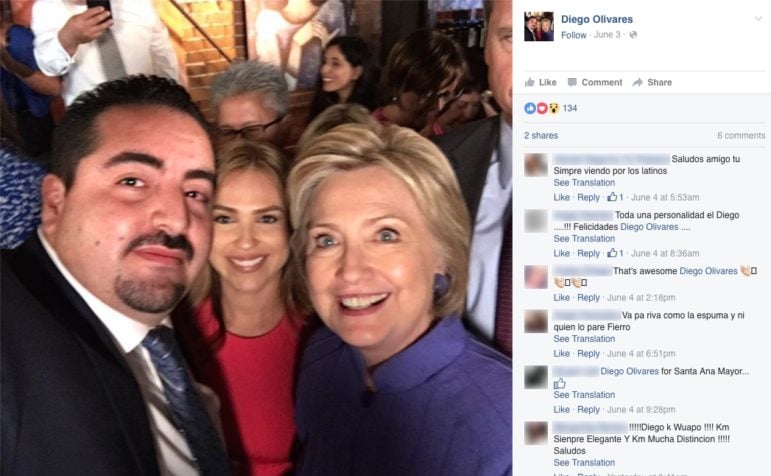 Olivares and his crew haven’t been shy about promoting their association with Pulido.

“Mariscos Hector making power moves with the mayor of Santa Ana,” the Mariscos Hector Instagram page posted along with a photo of Olivares and Pulido dining together at the posh Anaheim White House Restaurant.

When confronted by reporters, Olivares denied being the man named in the federal case files and refused to comment for this article. Following Olivares’ denial, Voice of OC took a number of steps to confirm that he is the same Diego Olivares convicted of cocaine trafficking and named as a DEA informant.

But there is some connection because at the May 3 Santa Ana City Council meeting Pulido abstained from voting on a pair of alcohol sales and late night operating permits for Hector’s on Broadway.

“I may have received a contribution,” Pulido said at the meeting, adding that, “out of an abundance of caution,” he wasn’t going to vote on the permits.

If Pulido did receive a contribution, he hasn’t reported it yet. His campaign filings dating from January 2012 to December 2015 show no contributions from the Mariscos Hector restaurants or the people who own and run them. His report for the first half of this year is not due until July 31.

Depending on what his upcoming report shows, Pulido’s vague explanation for his recusal could constitute a violation of the state’s Poltical Reform Act.

The act requires council members to recuse themselves from votes involving businesses or people with financial ties to the elected official. And in addition to the recusal, the council member must adequately explain the circumstances of the conflict.

Pulido’s statements from the council dais don’t square with another explanation given to a reporter by a source close to Pulido. That source said Pulido abstained from the vote on the permits because Olivares had asked Pulido for help with the permitting process – which Pulido provided — and the mayor felt he was too close to the issue, the source said.

Pulido doesn’t keep very good track of his campaign contributions, and Voice of OC’s past coverage has the mayor “spooked” into avoiding participating in any decision that might be a conflict, the source said.

The source also acknowledged that Olivares has had drug-related offenses in the past, but that the restaurateur has put that behind him and is now a “stand up citizen.”

The possibility that Pulido gave a false reason for recusing himself from the vote on Mariscos Hector’s liquor license is unfamiliar territory for Bob Stern, co-author of the 1974 Political Reform Act.

“I haven’t heard of that one before,” Stern said when told about the situation. “If [Pulido’s explanation] is totally wrong, I assume there’s some problem.”

It’s possible that Pulido had no legal reason to recuse himself from the vote, Stern said. His publicly filed statements of economic interests show no connections to the Mariscos Hector restaurants.

The only campaign contribution connected to Mariscos Hector in the 2014 Santa Ana mayoral race was a $3,000 donation made by Maria Sebold to the Taxpayers for Ethical Government Political Action Committee, which spent $9,783 on mailers opposing Councilman Roman Reyna, who was Pulido’s then challenger for the mayor’s seat.

On alcohol sales licenses issued by the state to Mariscos Hector restaurants, Sebold is listed as president. She didn’t return a phone call seeking comment, but a woman who answered the phone identified Sebold and Olivares as the owners of the restaurants.

A contribution to an independent expenditure committee wouldn’t disqualify the mayor from voting under the city’s campaign finance law.

Pulido has shown a pattern of withholding information from campaign finance and financial disclosure forms, a habit that has given him trouble on multiple occasions over his 21 years as mayor.

In just one example, Pulido is the target of an ongoing state Fair Political Practices Commission investigation into whether the mayor illegally omitted thousands of dollars in campaign debt from his disclosure forms as if it never existed.

And most recently, Shirley Grindle, the mayor’s one-time treasurer and Orange County’s campaign finance watchdog, found more than a dozen omissions from the statement of economic interests Pulido filed in April. Among the missing information were the terms of personal loans to the mayor, his positions with companies listed as sources of income and their business activities.

Longtime City Hall watcher Thomas Anthony Gordon was shocked when shown the images and at first asked whether Pulido was directly involved in any illegal activity. After collecting his thoughts, Gordon said it was more evidence of the kind of culture Pulido has created at City Hall — one involving “hanging out with suspicious characters and raising money from dubious sources.”