As the window rapidly closes on the Westminster City Council’s chances to prevent bankruptcy by 2018, council members will meet Wednesday to pass a 2016-17 budget and again debate whether the path forward should be shaped by a tax increase or major spending cuts.

The meeting will likely be contentious, as council members – three who are up for re-election in November — are split over whether to place an initiative championed by councilwomen Margie Rice and Diana Carey on the November ballot for a one percent sales tax increase.

The other option, put forth by councilman Tyler Diep, is a $3 million budget cut that a staff report suggests would be devastating to the city’s basic functions.

These cuts would be in addition to cuts the city made in 2011 to deal with a $10.4 million shortfall caused by Gov. Jerry Brown’s decision to abolish redevelopment agencies, including layoffs of 67 employees and outsourcing of several city services. Those cuts have not been restored.

A proposal for the new cuts would be based on each department’s proportional share of the general fund and would hit the Police Department the hardest. The department’s budget would be cut by $2.08 million and include the elimination of six sworn and four civilian positions, reductions in the budget for part-time work and ending two outside contracts — one being a $200,000 jail service contract and the other a $60,000 public relations contract with Behind the Badge.

According to the staff report, prepared by accounting manager Sherry Johnson, cutting finance staff would also make it difficult for the department to maintain internal controls to prevent fraud and error.

“As we continue to cut staff, Finance will be less able to have clear segregation of duties…And, it is our opinion that cutting additional staff would put our city at greater risk for fraud and error,” the staff report states.

Two part-time public information clerks and the City Council secretary would be cut from the City Manager’s office, as well as a $30,000 federal funding and lobbying contract, $28,429 in special project contracts and the $15,000 fee for membership in the Association of California Cities.

Two part-time planning positions would be eliminated and contracts for plan checks, planning legal review and building inspectors would be reduced, likely doubling wait times for approval, according to the staff report.

Several community services will also be eliminated along with layoffs of one full-time employee, seven part-time employees and two seasonal part-time staff.

Five city events – Dia de la Familia, a tree lighting ceremony, spring festival, Flag Day celebration and summer concerts – will be cut. Local schools will lose four crossing guard locations, a year-round afterschool program and one summer program. Facility fee waivers – which the council has consistently granted in the past – would be suspended and $3,000 in funding for the Mayor’s Ball would be cut.

A number of public works services are already outsourced, including day-to-day janitorial services, park maintenance and utilities, and street maintenance. These contracts would be reduced under the budget cut scenario. The department would also shift funding for a number of positions from the general fund to gas tax and Measure M funds, a move which would temporarily keep the positions intact by taking from funds set aside for street repairs.

Diep did not return a request for comment on the proposed budget cut scenario.

Though all these cuts would buy the city time, they would do little to prevent a rising structural deficit projected to hit $15.5 million in the 2018-19 fiscal year

A financial consultant hired by the city has pointed to low fees and property taxes as factors behind the city’s weak revenue stream, which brings in $454 per capita compared to an average $683 per capita among five comparison cities.

A citizen financial task force appointed by the council late last year stated in a report that although a sales tax increase could be a viable strategy, most felt the city should first explore a number of cost-saving measures before raising taxes, including:

Rice and others backing the sales tax ballot measure, which staff estimate would raise $12 to $13 million a year in new revenue, say residents are willing to pay for the services they have.

Among those residents is Jill Dominguez, a long-time resident who is organizing a push for the sales tax initiative. Dominguez criticizes the city council for waiting for the eleventh hour to find a solution.

“They had four years to do something…and now all of a sudden we’re hearing about it. Most of my neighbors had no idea,” said Dominguez. “Whether or not people vote for the sales tax, they deserve the right to vote.” 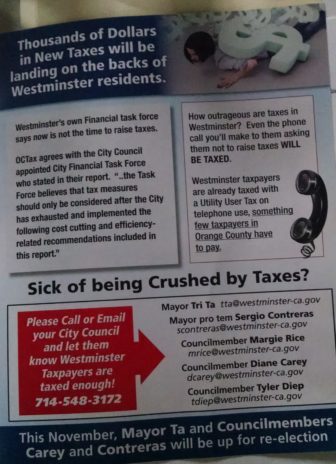 A mailer sent by the OC Taxpayers’ Association to Westminster residents.

The issue has also attracted outside groups, including the Orange County Taxpayers Association, which sent mailers this week depicting a woman being crushed by large dollar signs.

“Thousands of new dollars in taxes will be landing on the backs of Westminster residents,” the mailer reads. “This November, Mayor [Tri] Ta and Councilmembers Carey and [Sergio] Contreras will be up for re-election.”

The meeting begins Wednesday at 7:00 p.m.