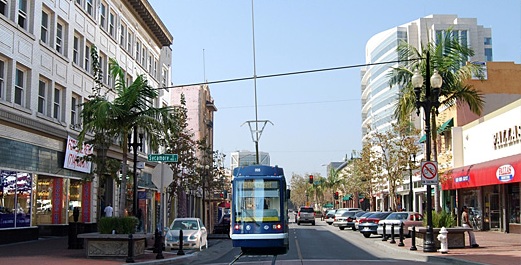 An artist's rendering of a streetcar in downtown Santa Ana.

After nearly six years of designing, planning and securing funding for Orange County’s first streetcar line, which will run through Santa Ana and into Garden Grove, county transportation officials are now embarking on a push for public input.

In public forums last Saturday and Wednesday evening in Santa Ana, Orange County Transportation Authority (OCTA) staff provided details about the project, which has been dubbed the “OC Streetcar,” including the planned route, stops it will make, and efforts to make it accessible for all potential riders.

Then they heard back from residents on a range of issues from parking to security and aesthetics. Some residents voiced their approval of the project, while others aired concerns, including critiques that it will add to the gentrification of downtown Santa Ana and not adequately serve the population that is in most need of public transportation.

The 4.15-mile streetcar route will begin at the Santa Ana Regional Transportation Center and take riders through downtown Santa Ana, along Fourth Street, down Santa Ana Boulevard and before ending at a new transit hub in Garden Grove at the intersection of Harbor Boulevard and Westminster Avenue.

A graphic of the streetcar route. Courtesy of OCTA.

Streetcar stops will be on raised platforms to allow for level boarding, meaning passengers in wheelchairs will be able to enter the car without the use of a lift. Designs can allow for a boarding platform in the center, with boarding on each side of the platform, or along a sidewalk, the same way a bus would stop to pick up passengers off the street,

Residents said shade, seating and safety were important factors in how a stop is designed. Some felt each stop should feature security cameras to deter crime. They also were in favor of electronic signs displaying the time and trip information.

Others said the stops should create ongoing opportunities for community involvement through public art projects.

One person suggested the agency hold workshops for seniors on how to use the streetcar and connect to other transit options to improve their mobility.

For the station stops, designers have not committed anything to paper and are on a fact-gathering mission, said Phil Klinkon, the Pacific Region Transit Director for RNL, the Los Angeles-based firm designing the stops.

Klinkon said parking is the most common concern for residents along the route. Unlike light rail projects that have their own dedicated lane, the streetcar would share the street with cars and buses.

That has led to concerns about street parking for Santa Ana households have more than one family living together, and need street parking in order to accommodate several cars.

Early plans for the streetcar route passing through the Artesia Pilar neighborhood, located between Bristol and Raitt streets, would have eliminated on-street parking for residents on both sides of the street.

After hearing concerns from numerous residents, designers have since restored some parking on one side of the street, said Tresa Oliveri, a community relations officers for OCTA.

Still, there will ultimately be less parking for residents along that segment of the streetcar route.

Also this week, the project was given a $28 million boost from the California State Transportation Agency as part of a cap-and-trade funding program to reduce greenhouse gas emissions through transit projects.

The money will go toward the more than $290 million cost of building the streetcar route, as well as OCTA’s rollout of a mobile ticketing program, according to a press release.

The same state program gave the OCTA $2.3 million toward launching Bravo! 560, an express bus between Santa Ana and Long Beach.

With the street car project is slated to begin construction in 2018, many residents still have reservations and concerns about how it might change their neighborhood.

Maria Ruvalcaba a Santa Ana resident who does not live along the route, is worried the streetcar would only cement a gentrification trend and price out the city’s poor and struggling Latino families.

Echoing Ruvalcaba was 40-year Orange County resident Young Tae Beck, who said the streetcar would be an expensive “decoration” and believes the Transportation Agency should invest in the existing bus system.

Meanwhile, Darren Shippen, a Santa Ana resident of 20 years, voiced the belief of many at the forum that the project will spur economic growth in the area and relieve traffic congestion.

“We would use [the streetcar] all the time,” said Shippen. “We only dine and shop in Santa Ana because we want our money to stay here.”

The Transportation Authority will hold another set of community meetings later this year to get feedback on their design concept for the streetcar stops.

Submit feedback about the Santa Ana streetcar at ocstreetcar-survey.com. The survey will be available online until Aug. 31.