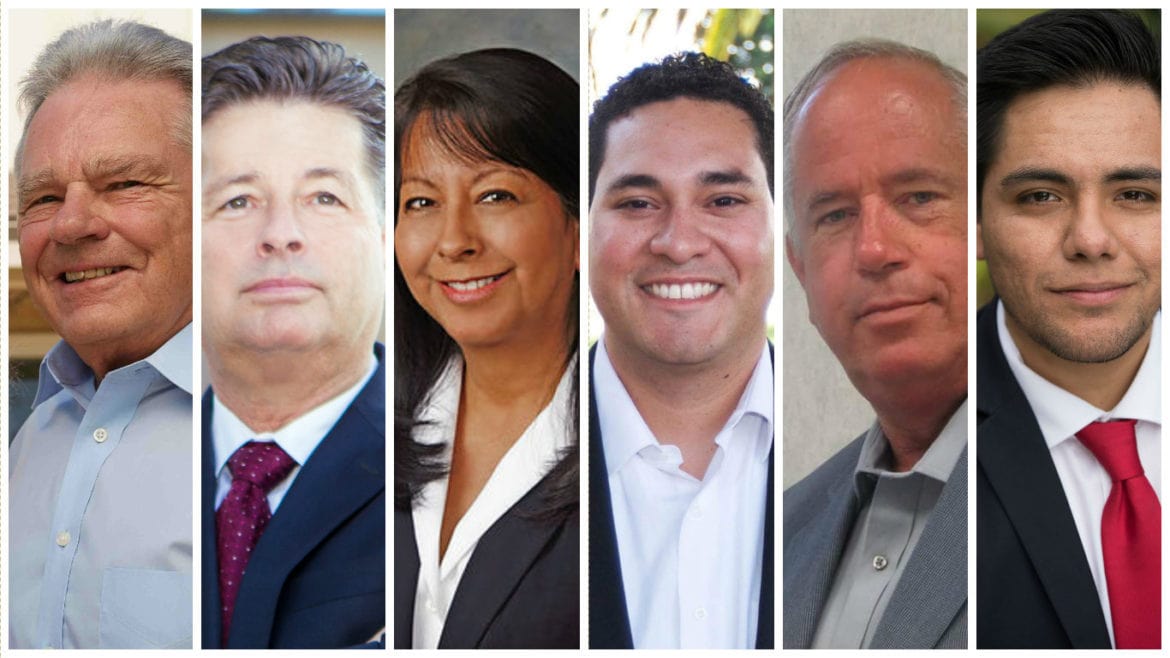 While the Anaheim Resort sees a constant influx of new development proposals and enjoys well-manicured streets and greenery, West Anaheim has long been a forgotten corner of the city, a patchwork of strip malls, neglected properties and fading motels.

But now — as the city enters a new era of district elections – it’s West Anaheim’s time, say candidates running for the City Council’s District 1 seat in the November election.

“This is an unbelievable opportunity where we can have people from our area speak to our needs, that we’ve never had before,” said Mark Richard Daniels, one of seven candidates for the seat. “We haven’t had a council member from this far west since 1990.”

The shift comes after a years-long battle for district-based elections that began in 2012, when the American Civil Liberties Union of Southern California filed a lawsuit against Anaheim alleging the city’s at-large election system disenfranchises Latinos.

The district is 48 percent Latino and 21 percent Asian, and has the second largest number of residents living at or below poverty, with 24 percent living on a household income of $25,000 or less.

As has been the case in other district races, the seven candidates in District 1, which encompasses the area west of Magnolia Street and along the eastern border with Buena Park, are divided by their stance on whether the city should give tax breaks and subsidies to large developers and corporations.

Disneyland, resort businesses and the Anaheim Police Officers’ Union have poured more than $150,000 to back Republican Steve Chavez Lodge, who has aligned himself with the current council majority in support of subsidies, arguing that the success of the resort district has and will continue to fund critical city services.

Disneyland, construction unions and the municipal employees union have also donated to Democrat Leonard Lahtinen, a long-time West Anaheim resident who supports some subsidies, but is critical of what he sees as an uneven distribution of resources to the resort district and Anaheim Hills.

Daniels, Carvajal and Van Stark are all very much opposed to corporate subsidies.

A seventh candidate, Orlando Perez, has not actively campaigned. 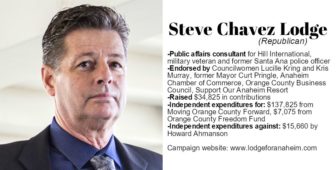 Lodge, a former Santa Ana police officer who has recently worked as a public relations consultant for the firm conducting an environmental review of Anaheim’s failed streetcar proposal, is clearly the favorite of the city’s police union and business establishment.

He’s raised $34,828 and benefited from at least $160,570 in independent expenditures, with most of those expenditures by a Disney-backed political action committee called Moving Orange County Forward.

A former city budget commissioner, Lodge has broadly stated his campaign priorities as “safe schools, clean streets and more jobs” for West Anaheim, although his website does not elaborate on those issues. Lodge did not respond to multiple requests for interviews for this story.

Controversy has followed his foray into politics. During his first run for council in 2012, Lodge was sued by Cynthia Ward, a local civic activist who accused him of using his father’s last name “Chavez” on the ballot purely for political gain.

A judge sided with Lodge, noting that he has testified in court under that name.

Opponents have also accused Lodge of carpet bagging because though he is registered to vote at the Azul Apartment Homes complex in District 1, he was registered to vote in Anaheim Hills when he ran for office in 2012. He also owns property in the city of Murrieta, where he was a public safety commissioner 2009.

During his career as a police officer, Lodge was named as a defendant in several excessive force lawsuits, including a 1990 case where a federal jury awarded a 27-year-old man named Hossein Farahani with $612,000 in damages against Lodge and the city of Santa Ana.

Lodge stopped Farahani for jaywalking, who said his limited English kept him from following the officer’s instructions. He accused Lodge, who was not found guilty of any criminal charges, of throwing him to the ground and beating him with a baton, according to the Los Angeles Times. 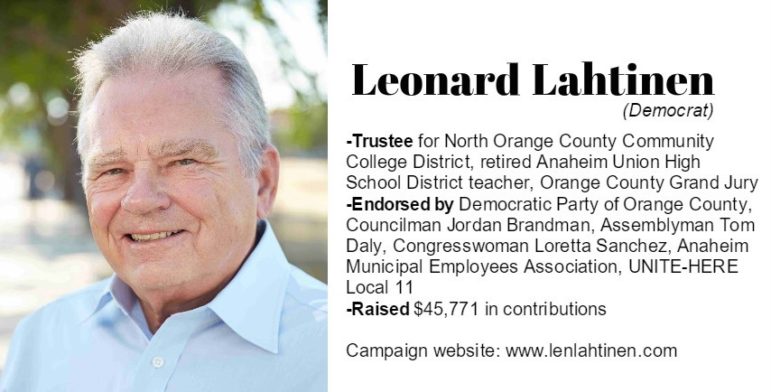 Lahtinen is a longtime board member for the North Orange County Community College District and is a retired Anaheim Union High School District teacher.

While he credits the Anaheim Resort and Disney as “cash cows” that have fueled major city improvements, he says West Anaheim residents have been complaining about a lack of development, infrastructure improvements and community facilities for years.

“I talked to a police officer who has patrolled all over, and he said this is the crummiest part of the city,” Lahtinen said.

Lahtinen, who believes the city should hire additional police officers, says the distribution of police resources has been uneven citywide, pointing to a police substation in Anaheim Hills that is open five days a week.

“In West Anaheim, we have substation on Beach Boulevard – it’s closed,” Lahtinen said. “It’s not open one hour a day or one hour a week.”

However, despite his laments about the geographic inequality in Anaheim, Lahtinen supports subsidies for three luxury hotel projects, citing a labor agreement that would require the hotels to hire union labor and local employees for construction.

“In the long run it will be a huge benefit financially to the city. They will be attracting big spenders,” said Lahtinen.

On the other side of the spectrum regarding subsidies and tax breaks is Barnes, who has campaigned on the message that they “have taken badly needed funds and left us with ruined parks, overcrowding, prostitution and homelessness.”

Barnes – who didn’t respond to requests for an interview — has raised $18,295 on her own, and has attracted another $10,397 in independent expenditures from local philanthropist and political donor Howard Ahmanson. 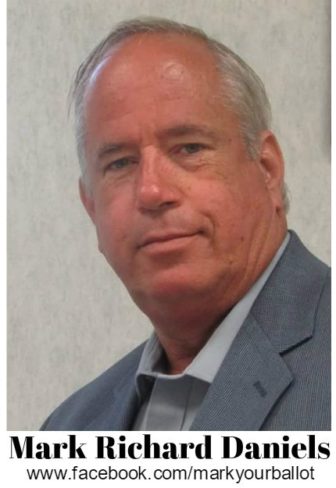 Daniels, who was born in Anaheim in 1958 and lived in West Anaheim back when it was mostly orange groves and strawberry fields, has billed himself as a “hands-on” candidate who would spend as much time outside of City Hall as possible.

Both Lahtinen and Daniels said they would focus on revitalizing Beach Boulevard, pointing to recent progress with the sale of a long vacant former landfill on Lincoln Ave. referred to by residents as “Stinkin’ Lincoln.”

Daniels said the city should create two commercial hubs along Beach Boulevard, including the recently approved development on the landfill and another hub at Ball Road.

“Like what Garden Grove is to Disneyland, West Anaheim is to Knott’s Berry Farm. We can draw off of what they’re doing,” Daniels said.

He is also skeptical of arguments that the city needs to hire more police officers, and says believes the city’s pilot public safety board lacks transparency and needs to evolve into a commission with subpoena powers.

“The board only seems to be there to hear what the police department says and the fire department says…even several members [of the board] have questioned what they are there for,” said Daniels. 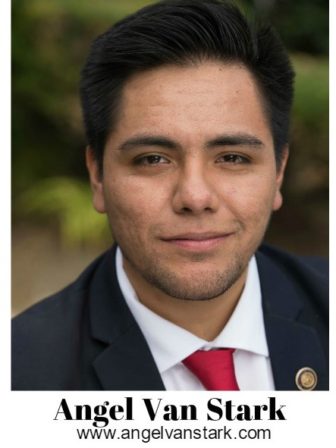 Van Stark has focused on homelessness and the high cost of living in Anaheim, and has proposed the creation of a youth commission and homeowner and renters’ board.

His top priority would be “creating an economy that works for all and not just the tourist industry,” he said, citing subsidies and tax breaks for companies like Disney as a negative influence on the city’s affordability.

If elected, Van Stark said he would push his colleagues to consider a minimum wage increase and look for nonprofit organizations that provide job training to prepare at-risk youth for higher-paying positions.

Van Stark said his hardscrabble youth and young adulthood, which included several periods of homelessness, gives him a perspective on the needs of homeless people that his opponents lack. He was homeless at the age of six, when he lived in a women’s shelter with his mother; around the age of 12 when his father went to jail, and again at 19, after coming out as gay. 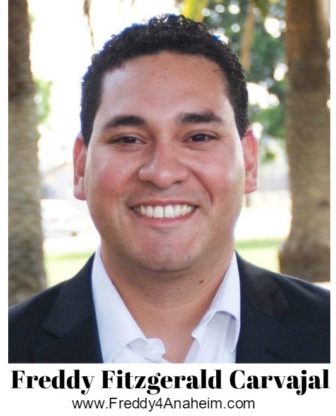 Carvajal, a 30-year-old insurance broker, cites his experience working for a member of the German Congress during his time abroad.

His main pitch is that the city needs to support small businesses as means to reduce inequality and increase investment in local communities.

He said the city should explore tax breaks and other incentives for small business owners, which would create more opportunities for youth, higher-paying jobs and improve neighborhoods.

Like Van Stark, Carvajal sees public safety and gang activity in Anaheim as a symptom of economic problems and a lack of opportunity for young people.

“Do we need more officers? Absolutely,” said Carvajal. “[But] if we come in with an aggressive approach and put all these kids in jail [and hope] they’re going to be better people when they come out, it’s not gonna happen.”

Correction: A previous version of this article erroneously stated that Howard Ahmanson/Fieldstead & Company spent $15,660 in independent expenditures on behalf of Steve Chavez Lodge, due to an error in a campaign filing by the committee. Ahmanson spent the money against Lodge.