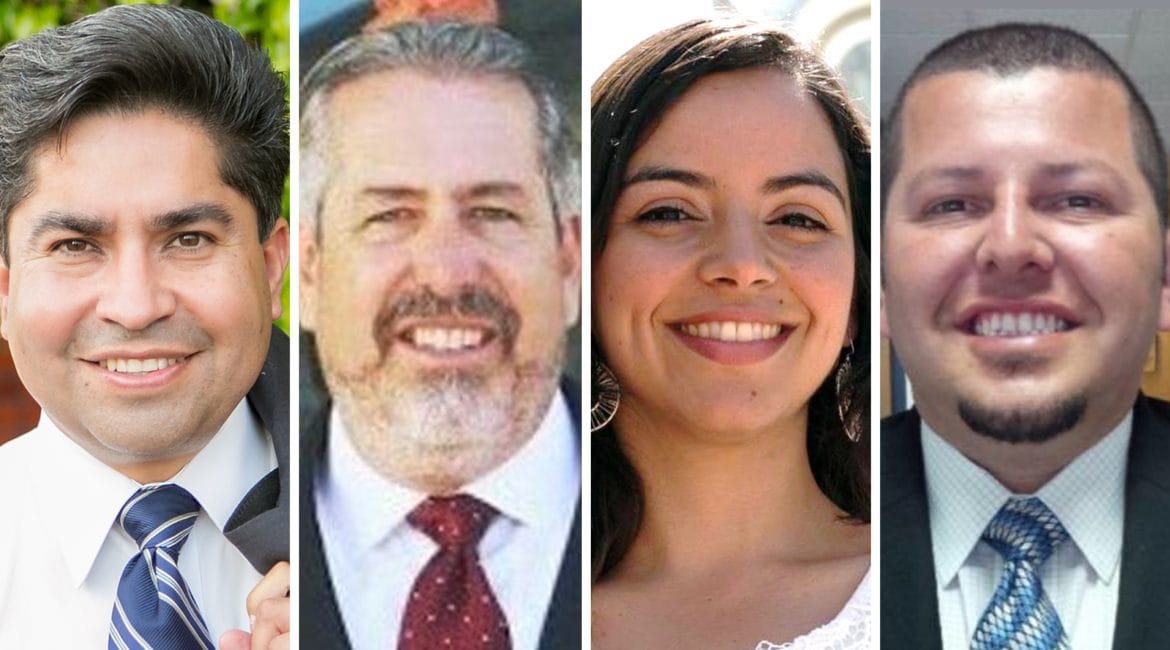 Do they keep the current council majority? Hand power to Pulido and the city police officers’ union? Or do they grow the power of community activists?

Nowhere is that choice more clear-cut than in the Ward 3 City Council race, where four main contenders are vying to replace Councilwoman Angelica Amezcua, who isn’t running for re-election.

As is the case for all of Santa Ana’s council seats, any voter in the city can vote in the Ward 3 race.

Dominating in campaign money and name recognition is Jose Solorio, a former Santa Ana councilman and state assemblyman who now works as a lobbyist. He is one of four police union-backed candidates seeking to take control of the council from the current majority.

Solorio and the police union went into the election with more than $400,000 at their disposal in their respective campaign accounts  – an enormous amount of money that dwarfs the competition. None of Solorio’s opponents have raised more than $8,000, as of the most recent reports in late September.

Solorio’s top challengers are counting heavily on their community relationships – and door-to-door campaigning – in their efforts to defeat him.

One is David De Leon, the PTA president for Santa Ana Unified School District, who has also led the city’s Kiwanis chapter and is endorsed by most of the current council members.

Another is Ana Urzua Alcaraz, a community health activist who played a leading role in getting Santa Ana to pass a pro-transparency law in 2012 and new wellness measures last year.

And Patrick Yrarrazaval-Correa is a school counselor who emphasizes his experience working with at-risk youth and finding affordable housing solutions on the city’s planning commission.

There are three other candidates in the race – Josh Mauras, Juve Pinedo, and Shane Barrows – who haven’t attended most of the council candidate forums held so far and haven’t created campaign committees, which restricts them to spending no more than $2,000 on the election.

Few issues have sparked as much debate this election season as the city’s role in protecting public safety.

Solorio and the police union have argued that violent crime and shootings have risen sharply this year and that the city hasn’t done enough to invest in its police department.

“Unfortunately and sadly we’re on pace to have a homicide count that is double” what it was last year, Solorio said in an interview.

He attributed much of the increased crime to an under-funded police department, and called for more resources for police.

“I want to increase the number of neighborhood patrol cops. I want to restore our anti-gang unit. I want to make crime stats public on the city’s website,” Solorio said.

On the other end of the spectrum is Urzua Alcaraz, who believes that the “tough on crime” philosophy is ineffective.

“I think that we have not seen any results from punitive approaches to criminal justice, like the gang injunction in [the] Santa Anita [neighborhood],” she said.

“I think, rather, we’ve seen safety and health really benefit when you have basic…quality of life needs met. So when you have decent housing, when you have jobs, when you have opportunities for youth…I think those are clear indicators of [how] you are able to reduce crime.”

Yrarrazaval-Correa agreed that the best way for the city to cut down on gang crime is to engage youth with opportunities. But he and De Leon have a more positive view of the role police can play.

“I believe we need to work together,” Yrarrazaval-Correa said of police and residents. “We need to get our cops out of their cars and talking to, particularly the youth in the neighborhood.”

“If we can keep our kids busy, if we can engage our youth in art and sports after school and summers, we can pull ‘em away from gang activity,” De Leon said, suggesting that classrooms be opened up for tutoring.

“We have the resources inside of Santa Ana, we just have to allocate them better.”

With many Santa Ana families doubling and tripling up in apartments to make ends meet, affordable housing has been another major topic in the election.

Yrarrazaval-Correa, who has served on the city’s planning commission, says the city should negotiate with developers seeking to build high-density towers as a way to get more affordable housing.

“We are not in the housing development business,” he said, adding that what the city can do is fund affordable housing projects with fees from high-density developments.

Solorio has talked about using city and outside funds to renovate and upgrade rental properties, and that he’s the guy to bring funds in from the state.

“We need money. I can also help bring that from Sacramento,” he said at a candidates’ forum last month.

“$10 an hour is not gonna cut it,” De Leon said. He proposed streamlining Santa Ana’s processes to make it easier for entrepreneurs to open shop, and a program where companies that hire Santa Ana residents at a “livable wage” of at least $15 an hour get tax write-off incentives.

And Urzua Alcaraz says she wants to strengthen the city’s affordable housing ordinance, which requires that developers either devote 15 percent of homes in new developments to being affordable, or pay “in leiu fees” that the city uses for affordable housing elsewhere.

She also wants to see the city use its over 90 parcels of vacant land, many of which are on busy Bristol St., for public uses like affordable housing.

“I’m afraid that we will sell out our city to the highest bidder, empty parcel after empty parcel of land, on Bristol” and elsewhere, Urzua Alcaraz said.

Solorio has over $100,000 in his campaign account, mostly from over 90 maxed-out $1,000 contributions, according to his latest disclosures. About two-thirds of his funding is from corporations, their owners and managers, and business advocacy groups.

About a quarter of his funding is from labor groups, which include the Orange County Employees Association and the California Teachers Association. He also received a letter from the Santa Ana chapter of Service Employees International Union, which represents most of the city’s workers, promising a donation of $249.

But there’s an even bigger stockpile of money to help support him: over $340,000 in the police union’s political action committee.

Already, the union has spent thousands of dollars on mailers supporting Solorio and their other endorsed candidates, and ads attacking their opponents. And many more mailers can be expected.

Solorio’s handling of his campaign money has caused him some controversy. He used about $1,800 of it to help pay rent for the apartment he’s living in to be eligible to run for Ward 3.

He claimed it was legal because he was using part of his apartment as a campaign office. But state authorities said using campaign money for property leased to a candidate, as Solorio did, runs afoul of campaign finance law.

Following a Voice of OC article on the issue, Solorio reimbursed his campaign out of his own personal money and vowed to stop using campaign funds for his apartment rent.

Solorio’s challengers have run a much more grassroots effort, mostly fundraising from individual donors who give $100 or less.

Yrarrazaval-Correa has raised at least $7,600 so far, including a $1,500 loan from himself. Many of his donors are local teachers, and most donors gave $100 or less.

Urzua has raised at least $5,000 so far, including $2,000 from her personal funds. Most of the outside contributions she’s reported are from donors who gave $100 or less.

And David De Leon has filed paperwork declaring that he doesn’t expect to raise or spend more than $2,000 on his campaign.

Clarification: This story has been updated to reflect more clearly the sources of Jose Solorio’s campaign contributions and his statements regarding the funding of youth programs.