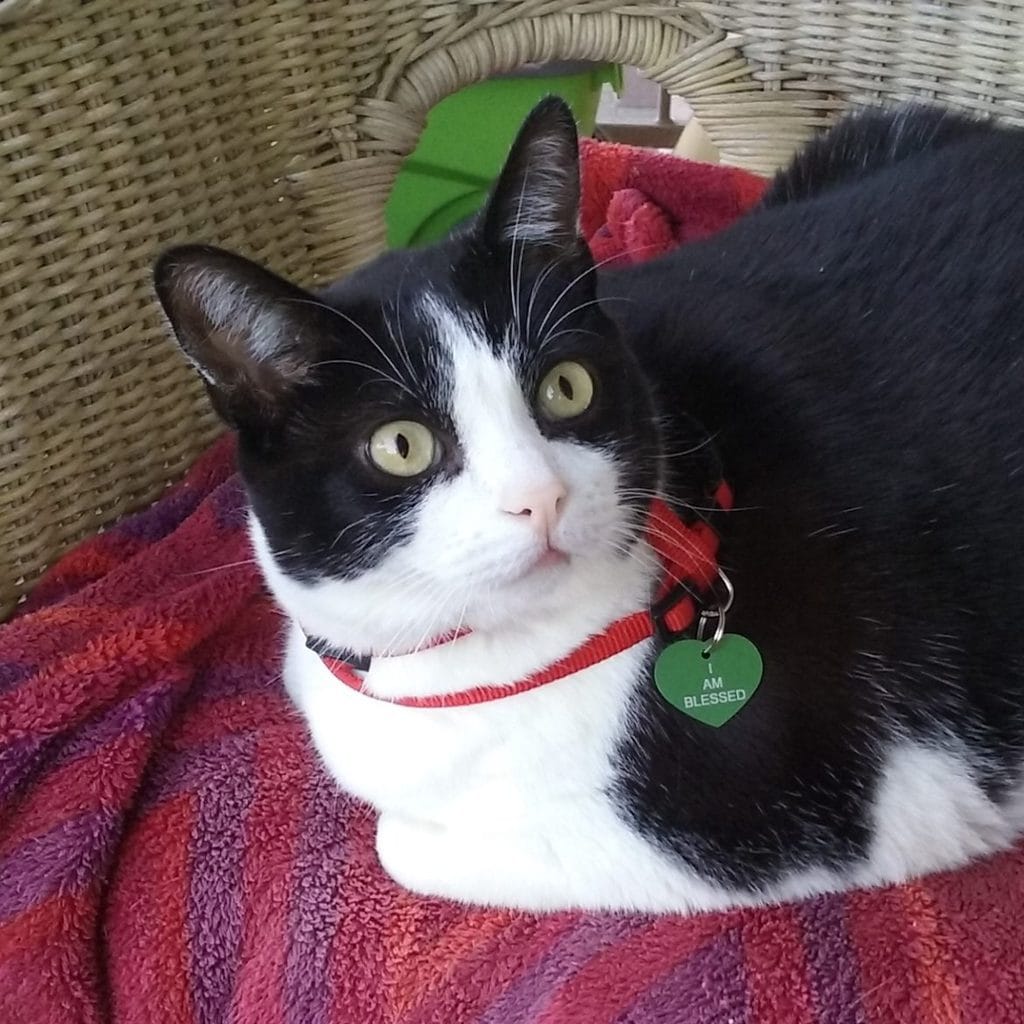 Shelly, "I am blessed"

The original animal and environmental activist, 12th century Saint Francis of Assisi, is celebrated globally this month (October 4) including in the town of Assisi, Italy where his body rests. In fact, you may view the tomb via live webcam.

He founded the Franciscan Order and was also a leader of the movement of evangelical poverty and is one of the most venerated religious figures in Roman Catholic history. Pope Francis chose the name in honor of Saint Francis of Assisi, because he was especially concerned for the well-being of the poor.

St Francis also became associated with patronage of animals and the natural environment, and it became customary for Catholic and Anglican churches to hold ceremonies blessing animals on his Feast day (religious celebration day dedicated to a particular saint) of 4 October.

Today churches, including the Washington National Cathedral, irrespective of denomination or ideology, quite often have Pet Blessing events. Such was the case at the Center for Spiritual Living, Saddleback Valley on October 2. Turtles, chickens, horses, dogs and cats, God’s creation were all blessed. As reported in Newsweek, the centers are known for Spiritual education. (If you consider yourself Spiritual, but not religious, this one or any of the 400 locations globally, may be a place to check out.) Because I personally believe in prayer, I know it was a powerful day which raised consciousness and enlighten many.

Saint Francis himself was not a vegetarian, but he lived in an age before the industrial farm. Do you think St. Francis would approve of modern, industrial farming?

In his book, Dominion: The Power of Man, the Suffering of Animals, and the Call to Mercy, Mathew Scully, special assistant to President George W. Bush, writes some people “side instinctively with any animal related industry and those involved, as if a thing is right just because someone can make money off it or as if our sympathies belong always with men just because they are men.”

In an effort to bring awareness to the plight of elephants and help them, businesses in the City of Dana Point partnered and spent time, effort and money to sponsor the Elephant Parade, Welcome to America several years ago.  So it was very disturbing to me to see trophy photos of Eric and Donald Trump Jr. posing with a dead elephant, kudu, civet cat and waterbuck while on a big game safari in Zimbabwe and our California assembly member representative Matt Harper’s (running for re-election) with the most negative voting history in the assembly on animal protection bills, including the issue of poaching of elephants. I agree with Scully, cruelty to animals is cowardly and disgraceful……….. Denying wild animals the last shred of respect. Aren’t we called to be their stewards?

What moral standards should guide us in our treatment of animals and when must those standards be applied in law? “All rights, in practice, are protections against human wrongdoing….” states Sully.

It’s taken our county and city officials close to twenty years to replace the one dilapidated 75 year old county animal shelter. Unfortunately, dogs are still reported running loose in Santa Ana streets and horribly neglected animals impounded at the shelter. It’s apparent it will take more than one new building to bring Orange County into alignment with 21st Century thinking. How about we look to our neighbor for inspiration, San Diego County, which has 4 nonprofit humane society campuses offering adoptions and teaching humane education to our children ….vs zero campuses in Orange County currently.

I believe a community/regional effort can resolve the homeless animals AND homeless human issues. And by community, I mean the “community” of Orange County……. county, city, corporations and constituents working hand in hand, with complete transparency, instead of placing the blame on one entity and/or waiting for someone else to take responsibility. We are in this together and what we do or don’t do affects others.

Have you attempted a trip to San Diego on the 5 freeway on a Friday night or Saturday morning and confronted with traffic taking you hours more than anticipated to reach your destination? It’s not due to one city’s actions! It more likely all the cities (which appear to operate as though they were in a cocoon) and the county which both approved the massive housing development by corporations. Let’s see more action for the good of all.

We are all connected on many planes. We are all One.

“In Noah’s day, the floods came. It can be perceived as not good…………. or might we consider it was a cleansing…..spiritual cleansing,” stated Rev. Lynn Gabrielson. Is the dove with her olive branch in sight?