The American Civil Liberties Union of Southern California has filed a federal lawsuit claiming that by erecting a chain-link fence next to the Santa Ana River in Orange, county officials have unconstitutionally “imprisoned” 75 to 100 people living in a homeless encampment there.

“Defendants’ actions have not only illegally restricted the liberty of the homeless people living in the encampment, but it has also cut them off from access to food, water, and medical care thus threatening their health and well-being,” according to the suit filed Friday in U.S. District Court in Santa Ana. It seeks an emergency court order that would, among other things, prohibit the county from continuing the alleged imprisonment.

County officials dispute this characterization, saying Thursday and again on Monday that there have been four “access points” in the fencing for people to enter and exit. And the homeless people, they say, are occupying a restricted maintenance road needed for a public works project.

The lawsuit, meanwhile, alleges that police in multiple cities had previously told homeless people to move to the riverbed if they didn’t want to be cited or arrested. Under those directions, it says, people have lived for years along this section of the river, between Chapman and Orangewood avenues.

“First Defendants and other law enforcement agencies direct individuals to the Santa Ana Riverbed, then they falsely imprison them by literally building fences around them that make it impossible for them to leave…such a Kafkaesque system cannot stand and is not lawful,” the suit states, referring to the novels of Franz Kafka, who wrote about the individual’s powerlessness against entrenched bureaucracies.

Gates were locked or welded shut, and any holes cut in the fence would be quickly closed by public works employees, the suit states.

The suit’s named plaintiff is 46-year-old Michael Diehl, a partially blind homeless man who lives in the riverbed.

“The only way to leave the encampment is by climbing one of the fences, cutting a hole in the fence, or trying to cross the river bed, and then scrambling up the steep rocky embankment on the west side of the river bed,” according to the suit.

The county’s actions, the suit claims, have created serious medical risks to Diehl and other disabled homeless people by obstructing paramedics trying to respond to emergencies. One woman who lives in the encampment has epilepsy, and recently had a seizure there, according to the lawsuit.

“Someone with her called 911, but when the emergency vehicles arrived they were unable to get to her initially because the gate they would have entered to get into the encampment was blocked by a large concrete barrier,” the suit states.

“Eventually, they went to another gate and had to wait for county workers to unlock it. These obstructions significantly delayed their being able to reach her and take her to the hospital.”

The suit alleges violations of the Fourth Amendment’s protections against unreasonable seizure, the Fifth Amendment right to not have one’s liberty infringed without due process, and California common law rights against false imprisonment.

The ACLU is asking for a temporary restraining order that:

And it asks for a permanent injunction blocking the county from refusing to allow Diehl “reasonable means of leaving the riverbed and being able to retrieve his property.”

(Click here to read the ACLU’s lawsuit and here for their restraining order request.)

County officials say they need to clear the encampment so they can use the area as a central location to store sand and boulders. Those materials will later be used to prevent flooding in neighborhoods across the county and to replenish sand at beaches, they say.

In response to the suit, county officials say there are several pathways in the fencing through which homeless people can enter and exit.

The county public works department provided four access points along the project area, county spokeswoman Carrie Braun wrote in emails last Thursday and this Monday to Voice of OC. She provided a photo of what she described as one of the access points, marked with a sign that says “CONSTRUCTION ZONE – EXIT ONLY.” 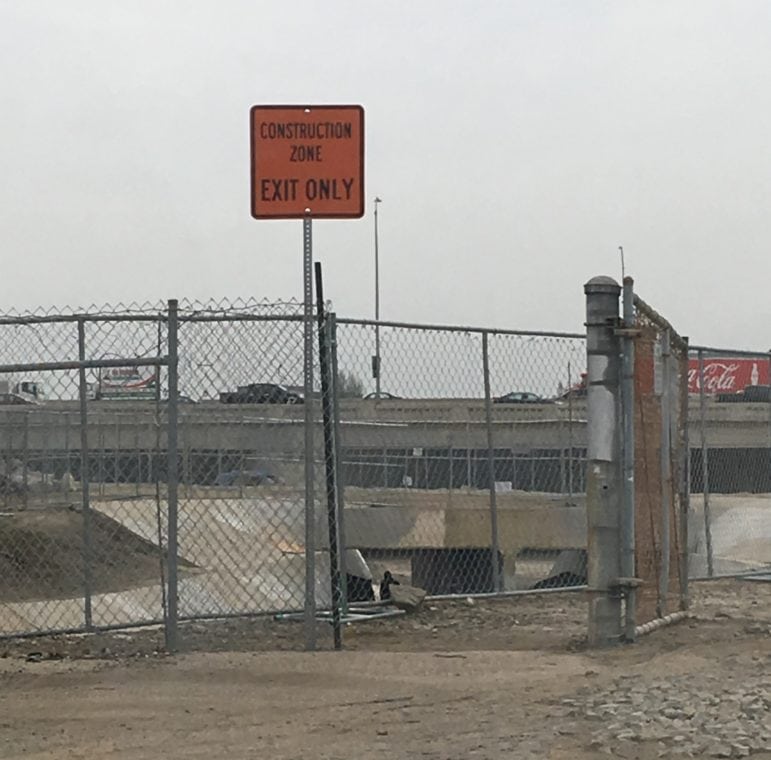 “We know that although this is private property, the individuals encamped there need access to resources until they voluntarily comply with the County’s request to relocate,” Braun wrote. The property is publicly owned by the county, she said, but is a maintenance road that’s “restricted from public access.”

Advocates say there’s no realistic alternative for homeless people in the riverbed to go, given that homeless shelters in the county are nearly full and prevent them from bringing all of their belongings. And the evictions are deepening homeless people’s distrust of officials, they say, making them less inclined to accept services.

Statistics provided by the county, meanwhile, show that there are typically dozens of available spaces in county homeless shelters.

The lawsuit follows through on a warning letter last Wednesday night in which the ACLU declared the county’s actions unconstitutional and threatened to file suit if officials didn’t cease and desist.

ACLU attorneys ended up filing suit Friday evening in U.S. District Court for the Central District of California, which assigned the case to Judge David O. Carter. A hearing for the restraining order request hadn’t been set as of Monday afternoon.

County attorneys filed a formal opposition to the ACLU suit Monday, saying the county “has gone to great lengths to give homeless notice that this project would be taking place and to find alternative options.”

They also asked that the court wait to decide on the restraining order until after Tuesday’s meeting of the county Board of Supervisors, at which they plan to seek direction on the case from supervisors.

The riverbed evictions continue to draw protests from homeless advocates, many of whom are planning to speak Tuesday morning at the county Board of Supervisors meeting. It starts at 9:30 a.m. at the county Hall of Administration in downtown Santa Ana.