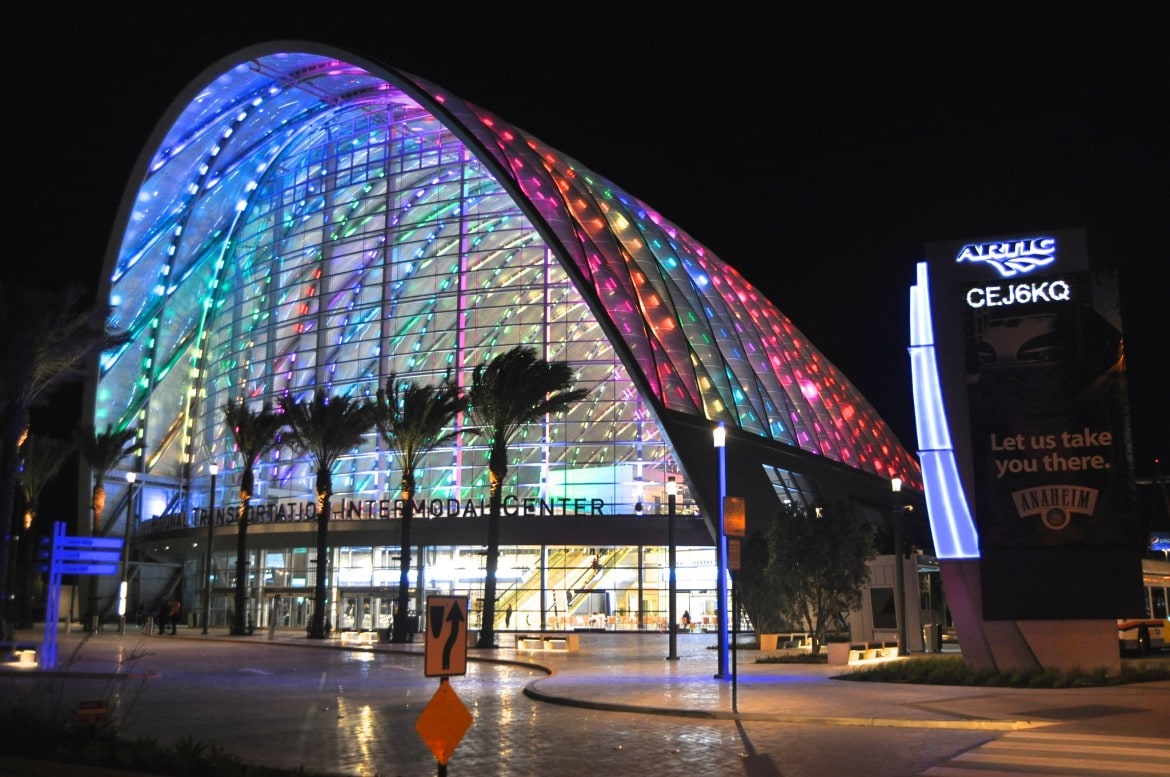 The new Anaheim train station, known as ARTIC, lit up at night.

Orange County has gotten its first glimpse of a controversial new, 30-mile railroad train planned between Los Angeles and Anaheim.

Not everyone was impressed.

However, in urban areas like Orange and Los Angeles Counties as well as around San Francisco, it only will travel at about 90 miles an hour, roughly the same speed as Metrolink or Amtrak, not the 200 miles an hour of a bullet train.

Brown is a former member of the Orange County Transportation Authority board of directors as well as the Amtrak, Metrolink and LOSSAN (Los Angeles, San Diego and San Luis Obispo Rail Corridor) boards.

He told Rail Authority officials he supports high-speed rail and thinks it’s a good idea, but believes the train running from the L.A. border to Anaheim is unnecessary because it won’t be going any faster than existing trains.

The train, which has met strong opposition in the past from county elected officials, doesn’t go beyond Anaheim in Orange County. A secondary plan would take it to San Diego, but through Riverside County.

When completed, it will carry passengers from Los Angeles to San Francisco in two hours and 40 minutes.

Officials say the train, which is set to open in 2029, will cater to a future California with more people and cars, and make it easier for people to work and go to school further from home.

“This will shrink the size of the state,” said Michelle Boehm, the southern California regional director for the Rail Authority.

Because it’s not a commuter line, originally it only had one stop planned between Los Angeles and Anaheim, and that was in Norwalk.

But tentative stops now add Fullerton so Metrolink passengers from Riverside can connect to it.

Planning for the LA to OC line still is preliminary and many details — such as the final route the rails will take, changes to existing train stations and road closures – won’t be available until after the agency finishes its environmental review process next year.

But Boehm says the massive project will be worth it.

“It’s happening,” Boehm said. “It feels glacial at times, but we do have construction going on.”

The project has started construction in the Central Valley, where, in sections, the train will run at its full speed of 200 miles an hour.

The high speed rail project has not been politically popular in Orange County and, with the exception of former Anaheim Mayor Curt Pringle and the City Council, has drawn opposition from many local elected leaders.

In 2010, Brown and other Buena Park leaders balked at plans to either demolish 40 new townhomes or the city’s $14 million Metrolink station, which was completed in 2007, to make room for the electric tracks required for high speed rail.

That’s still a possibility, although project manager Melissa De La Pena said at another open house in Anaheim on Thursday that avoiding homes and keeping the station in place “can be done” with special planning.

If the station is ultimately demolished and rebuilt, the High Speed Rail Authority would pay for it, she said.

In Fullerton, rather than adding a new platform that would widen the existing Metrolink station, officials say they are looking to extend the length of the platform to make room for the high speed rail train to stop.

Boehm, answering questions from the audience at the Anaheim meeting, said the Rail Authority doesn’t intend to disrupt Metrolink or Amtrak services during construction.

Although the new train will travel most of the existing railway currently used by other trains, the Rail Authority will pay for a number of road improvements along the route.

Most of the 30-mile route between LA and Orange County will be at-grade, meaning trains will run at street level and have to stop traffic to cross roads.

In several areas, however, the Rail Authority will build new infrastructure, called grade separations, to separate trains from other types of traffic.

Areas where there are new grade separations, shown in the graphic below, will experience the most construction disruptions. But once completed, they will improve safety and traffic congestion, said Ali Mir, an environmental consultant to the project. 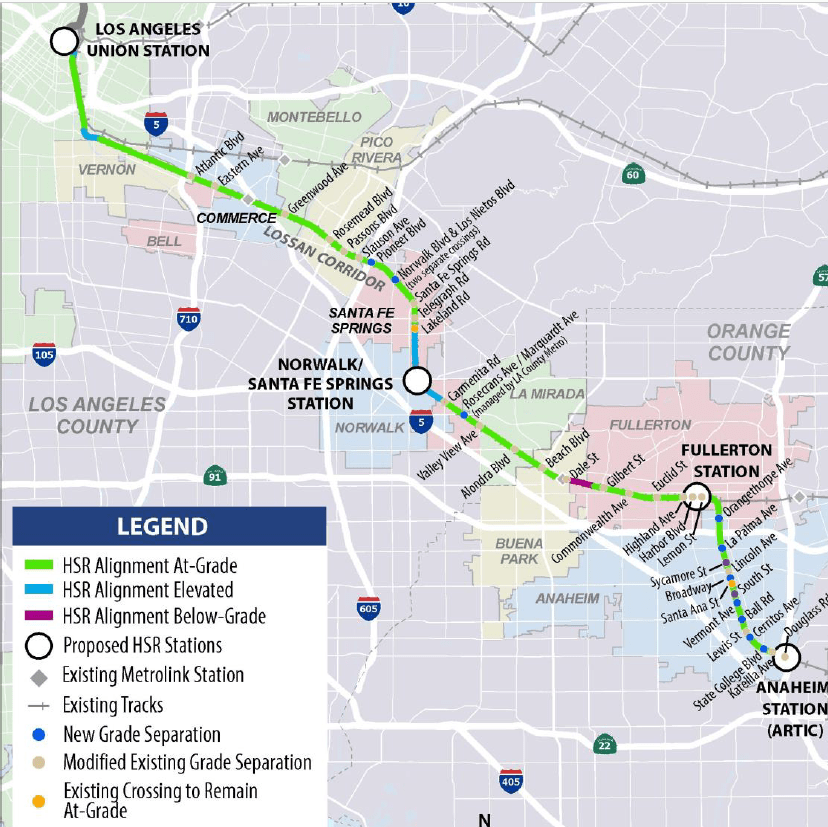 Although the official route is not final, the Rail Authority likely will build a tunnel so the train can pass below ground near the Fullerton Airport and a bridge above State College Boulevard.

At the community meetings, officials received several questions about how the High Speed Rail system will be funded once it’s up and running.

At the April 6 open house at ARTIC, Boehm said it will run “like a business” and pay for itself through ticket fares and other revenues. The Rail Authority also claims in its 2016 Business Plan the revenue generated could help “unlock private dollars to continue sequencing the rest of the system.”

Responding to a question about how President Donald J. Trump’s proposed budget, and his threat to take away federal funding from sanctuary states, might affect the project, Boehm said it wouldn’t.

The project currently is relying on post-recession stimulus funds awarded by the Obama administration that must be spent by June 2017, and state cap and trade funds to finance the next phase of the project, Boehm said.

“We do have several years of work we can do without funds, up to five years for sure and possibly longer,” Boehm said.

Funds for aspects of the rail system, however, are already in jeopardy.

In January, Congressional Republicans from California called on the Department of Transportation to hold up funding for the high speed rail project until an audit is conducted of the controversial project.

Then in February, the department notified the state it would defer a $650 million grant that would have paid for a 50-mile electrical power system that both the Caltrain commuter rail system and the future high-speed rail system would share from San Jose to San Francisco.

It’s unclear still whether that grant will be canceled entirely or just delayed.