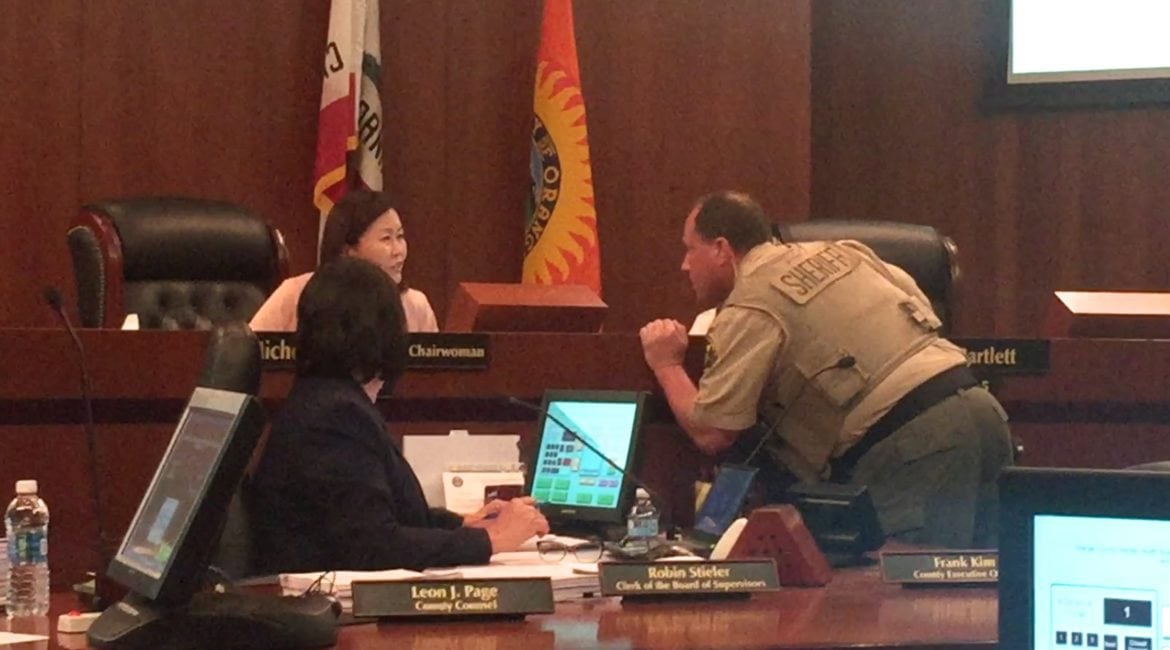 Supervisors' Chairwoman Michelle Steel (left) speaks with a sheriff's special officer just before issuing her order to clear the board room. (Photo by Nick Gerda/Voice of OC)

This article has been updated to include a video of the encounter.

The Orange County Sheriff’s Department may change a policy that resulted in a deputy threatening to arrest a Voice of OC reporter for trying to watch officers remove a homeless activist from the Board of Supervisors public meeting room.

“We will take a look at this and potentially allow members of the media to stay” if the supervisors’ meeting room needs to be cleared out in the future, said Sheriff’s Department spokesman Lt. Lane Lagaret.

The issue never should have come up in the first place, said Terry Francke, general counsel to the open government nonprofit Californians Aware and Voice of OC consultant.

“The reporter wasn’t just there warming his seat,” said Francke.

Board Chairwoman Michelle Steel declared a 10-minute recess and then ordered the room cleared. Aly stayed at the speaker’s microphone as sheriff’s officers approached him.

Voice of OC reporter Nick Gerda tried to stay in the room to film how the officers dealt with Aly and what was said. With the rest of the public out of the room, Sheriff’s Deputy Kevin Taylor, who is in charge of security at the board meetings, threatened to arrest the reporter if he didn’t leave too.

Gerda identified himself as a reporter trying to document a possible arrest.

“You could be part of the arrest also,” Taylor replied. Gerda ultimately left before the confrontation with Aly was resolved.

Francke said Gerda had a legal right to stay in the meeting room and report and film what was happening. Gerda said he was trying to report how officers would get Aly to leave the microphone, including any potential use of force.

“Recess is different from adjournment,” Francke said. A recess “doesn’t make the board room private property” and if reporters continue working while the room is being cleared it “doesn’t make them trespassers.”

“The public has a right to know” what happens during a recess, he added, “because they (supervisors) could be violating the Brown Act” by meeting secretly in violation of California’s 64-year-old open meeting law.

A majority of the board talked amongst themselves after Aly wouldn’t leave the podium and before the room was cleared. From left: Todd Spitzer, Andrew Do, and Shawn Nelson. (Photos by Nick Gerda/Voice of OC)

“That (board) room is specifically designated as a meeting room,” Francke said. “It’s designed for the public to witness things.”

County Counsel Leon Page strongly disagreed. He said the reporter was properly ordered to leave “because the board was not in session and the meeting was not being conducted.

“There was nothing to report on,” he said. “The board meeting room is not a public forum where members of the public have a right to be when the board is not in session.”

Page said the goal in clearing the room was to keep everyone safe and get Aly to leave the microphone without officers having to physically remove him. Aly said afterwards he left because officers threatened to shock him with a Taser and told him it would be “painful.” 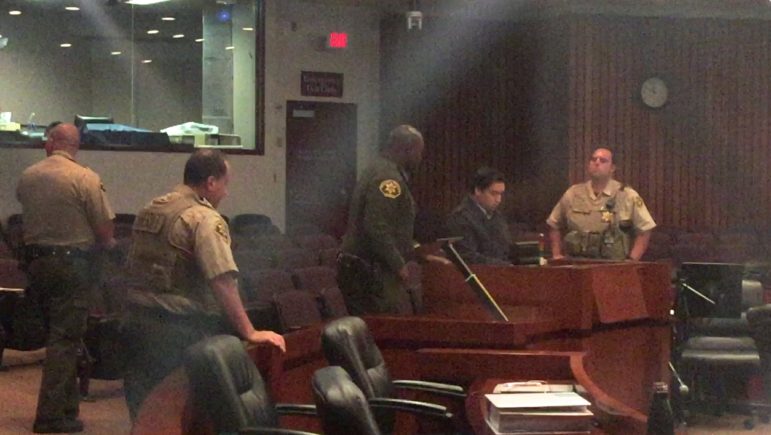 Homeless activist Mohammed Aly is surrounded by a sheriff’s deputy and security officers after the room was cleared. (Photo by Nick Gerda/Voice of OC)

Page said there was a “very successful resolution” of the encounter because there was “no arrest, no one got hurt, no one’s rights were violated.”

“It was textbook from my perspective,” he said, with officers “dealing with a very difficult situation.”

Clearing everyone from a Board of Supervisors meeting happens so rarely that Carrie Braun, the county spokeswoman, said it likely has been more than a decade since the last time it happened based on the memories of well-informed staff.

Santa Ana Mayor Miguel Pulido, in October, 2014, cleared the council  room before the meeting even started and subsequently cancelled it when a man would not abide by his order to remove a hat with an obscene statement directed at police.

But in that case reporters were allowed to stay throughout the entire clearing out process and a reporter who was outside when it started was allowed to come in and watch.

Lagaret said Taylor and other Sheriff’s personnel receive no training in open meeting laws before being assigned to provide security at Board of Supervisors meetings.

Lagaret said officers rely on the law enforcement training they receive throughout their careers with the department.

He said Taylor made the decision to require everyone, including Gerda, to leave as a “safety decision.”

“That’s why they told him (Gerda) to leave,” said Lagaret. “It was a deputy’s decision to do it just for public safety.”

Asked how the public could learn what happened if reporters are barred from the scene, Page said they could talk to him and to Aly. The board also has cameras inside the meeting room but the county has a policy banning release of the footage. Page rejected a Voice of OC request to view video of officers dealing with Aly.

Kari Schumaker, the county’s custodian of records, wrote in an email the film was exempt from disclosure “because the security videos depict law enforcement security procedures and are records of intelligence information and the public interest in nondisclosure of the security video substantially outweighs the public interest in disclosure. The decision not to release this material was made by Leon Page, County Counsel.”

Gerda captured part of the officers encounter with Aly by filming through a window but an officer moved in front of the window at one point, obscuring what was going on and there was no way to hear what was being said.

Before ordering the room cleared, Steel could be seen conferring with Paul Walters, a former Santa Ana police chief and city manager who now is chief of staff to Supervisor Lisa Bartlett. 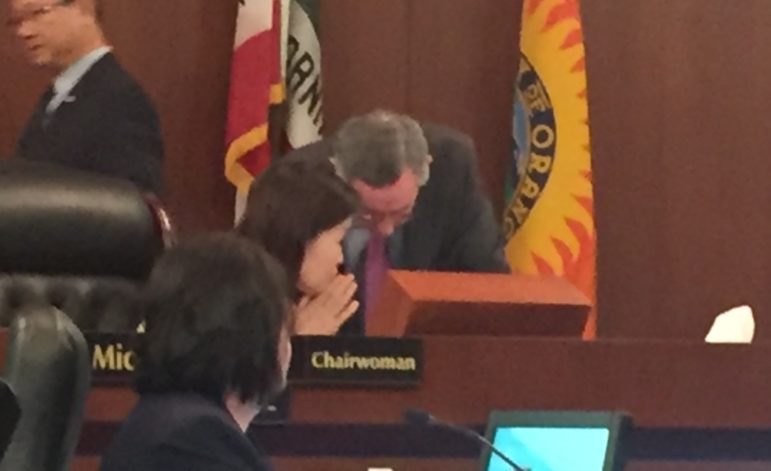 Steel speaks with Walters just before issuing her order to clear the room. (Photo by Nick Gerda/Voice of OC)

Steel did not return phone calls about how and why she made her decision to clear the room. Walters said he relayed information to Steel from the deputies about how they planned to proceed.