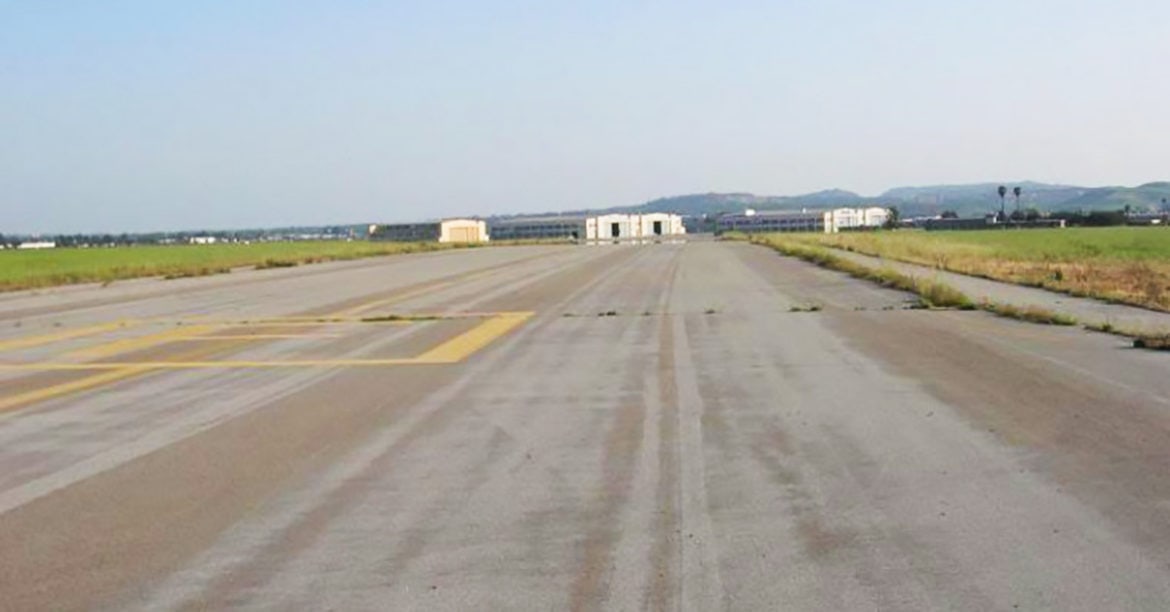 Runways and hangars at the former El Toro Marine Corps Air Station, which is now the site of Irvine's Great Park.

Gov. Jerry Brown is scheduled to be in Irvine Friday for a tour of two sites for a proposed state veteran’s cemetery, but not all City Council members were invited and it’s not clear who he is talking to.

At issue is which of two sites may win his backing to become Orange County’s veterans cemetery. One site, the former El Toro Marine Corps Air Station, holds strong emotional meaning for veterans, dating back to World War II.

The other site near the interchange of the 5 and 405 freeways at Bake Parkway, was on the fringe of the El Toro base but currently is used for agriculture.

Brown is scheduled to privately tour the sites from noon to 2 p.m., followed by an invitation-only reception and will conclude with a press conference at 2:30 p.m. at the Great Park Gallery.

Assemblywoman Sharon Quirk Silva (D-Fullerton), who helped secure the Great Park site through the Legislature in 2014, will be on the tour with Brown, along with Assembly Speaker Anthony Rendon and representatives from FivePoint, owner of the freeway site, said Michael Henning, a spokesman for Quirk-Silva.

“It’s not to be politically charged … Republicans are involved as well,” Henning said. “We want to get this done so the veterans get the cemetery they deserve.”

Henning said while Quirk-Silva’s office helped set up the reception and the press conference, he doesn’t know who else will be touring the sites with Brown.

However, Irvine City Councilwoman Christina Shea, who favors the freeway site, said the tour will be led by FivePoint Vice President of Special Operations Bill Hammarle, a former Marine Colonel who was stationed on the El Toro Marine Air Base.

Brown’s sister, Kathleen Brown, a former California Treasurer and current partner in the Manatt, Phelps & Phillips law firm, also sits on the board of directors of developer FivePoint. It’s unknown if she has taken an active role in deciding which site becomes the cemetery.

FivePoint, a commercial and housing developer, has proposed swapping the freeway land for the El Toro site. Irvine was unable this week to provide comparable values for the two sites if one or the other ultimately is used for commercial or residential development.

Asian Irvine residents near the El Toro site, which now is part of Irvine’s Great Park, have opposed putting the cemetery there, saying it is bad feng shui.

If FivePoint obtains the El Toro land as part of a swap for its freeway site, it would need to tear down former hangers and other buildings and remove runways to build houses or other projects.

“We’re always considering what the future looks like, but we don’t have any specific plans for that site at this moment,” FivePoint Chief Communications Officer Steve Churm previously told Voice of OC.

Leaders of several county veterans groups contacted by Voice of OC declined to return calls saying which site they preferred.

Currently, the closest veterans cemeteries are in Los Angeles, San Diego and Riverside Counties. Sources who have spoken with some veterans about the issue said several leaders are worried they might jeopardize Orange County getting a cemetery at all if they say they prefer the El Toro site. The sources said they did not want to be named because it could help identify the veterans who confided in them.

At its April 4 meeting, the City Council, in a split vote, decided to put $38 million toward the expected $80 million price tag for a cemetery on the El Toro/Great Park site. But the council also directed city staff to look into a potential land swap with FivePoint.

Councilwoman Melissa Fox said Thursday only Mayor Don Wagner and Councilman Jeff Lalloway will be part of the governor’s tour. Lalloway, along with Councilwoman Lynn Schott, is a strong supporter of the El Toro site.

“It left the ladies out, which is interesting because it was (Councilwoman) Christina (Shea’s) memo that got this back on the table.”

While all five Irvine City Council members are invited to the reception, Fox said, “Frankly, I think the entirety of the council should be involved on (the tour).”

Fox is on the board of the Orange County Veterans Memorial Park Foundation, a small organization originally established to bring a veterans cemetery to the El Toro site, but whose leader, Bill Cook, now says he favors the freeway land because there is less work involved in cleaning it up and its freeway location makes access easier.

“I was not invited to it (tour or reception),” Cook said. “Nor is any representative of the committee. Why, I don’t know. I’m not even speculating.”

However, in an email, Cook said his lack of invitations apparently was a mistake and Quirk Silva late Thursday afternoon invited foundation leaders to the reception.

“We like the visibility of (the freeway) site very very much. That’s going to be a show place.” Cook said. “There’s no pollutants…there’s no surprises, no unexploded ordnance.”

“What we’re trying to do right now is get the State Veterans cemetery done as soon as possible,” Cook said. “I know people who have passed since we started this process and their loved ones are holding onto their remains to bury them in this cemetery.”

If the El Toro site is selected, it could get an additional $10 million in federal funds but still would need about $30 million from the state.

FivePoint sent its land swap proposal to the city two weeks ago.

According to a letter from FivePoint Chairman Emile Haddad, each site contains about 125 acres and no substantial zoning, traffic or environmental issues affect the freeway cemetery land. To read the proposal, click here.

FivePoint’s plan includes an offer to finance the first phase of the freeway site cemetery construction.

Spencer Custodio is a Voice of OC intern. He can be reached at [email protected].