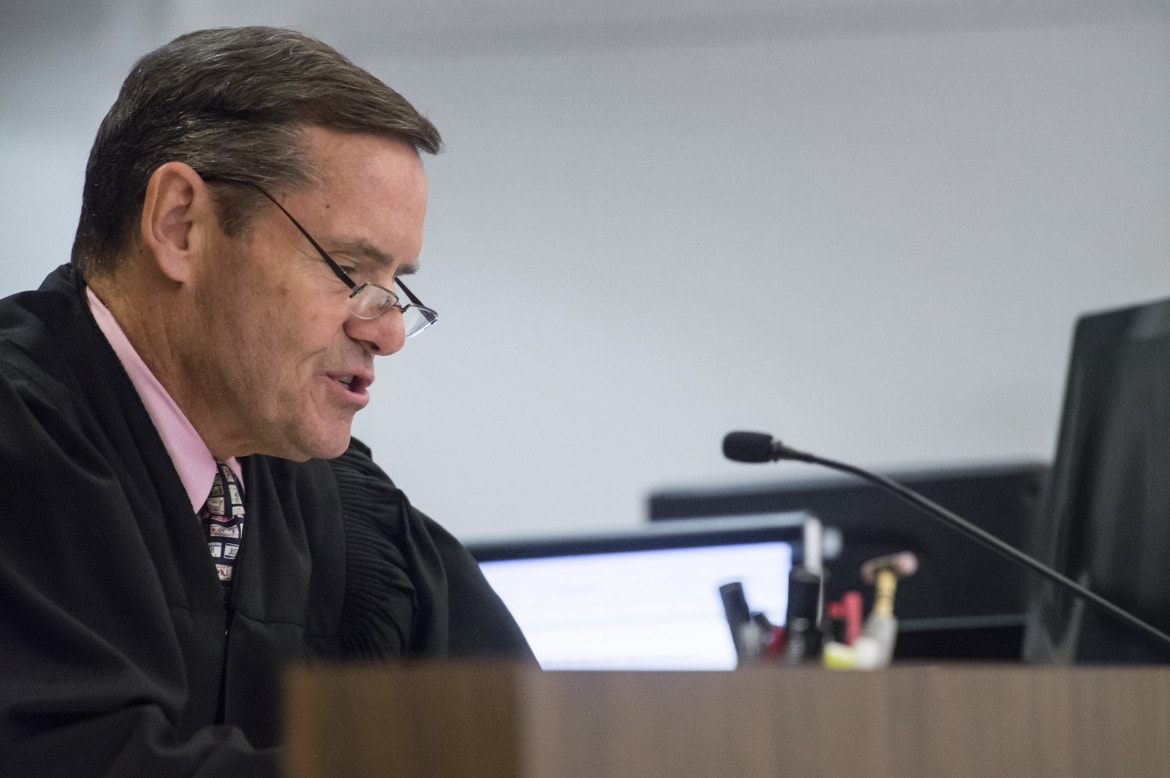 “It’s the integrity of this system, that the community depends on to support the rule of law, [which] is more important than anything,” Goethals said during the fourth day of a hearing to address how the Sheriff’s Department handled evidence in the Dekraai case. “And so if this court makes lawful orders and somebody doesn’t comply, I will be hard-pressed to ignore it.”

Deputy Attorney General Michael Murphy, who is prosecuting Dekraai after the District Attorney’s office was removed by Goethals, expressed frustration with the scope of the hearing. He said while the question of the Sheriff’s compliance with discovery orders is relevant, it’s not the job of the court to investigate the policies and practices of the department.

“The only thing left to do in this case is to have a jury decide what penalty is the appropriate punishment to someone who has confessed,” Murphy said. “Nothing the Sheriff has done or not done…is going to undermine the fact that the defendant confessed to these killings.”

Five years after Dekraai admitted to fatally shooting eight people at a Seal Beach beauty salon in 2011, his case is still winding through the courts, as allegations of illegal use of jailhouse informants by prosecutors and the Orange County Sheriff’s Department has Goethals weighing whether Dekraai’s rights were violated so egregiously that he should dismiss the death penalty altogether.

“It is likely that if this case had been prosecuted (by the DA’s office) in a basically competent way at the outset, Mr. Dekraai would be living on death row in San Quentin,” said Goethals, who dismissed the entire DA’s Office from the Dekraai case in 2015 after ruling prosecutors failed to turn over key evidence to the defense.

Over the past several months, Goethals has expressed frustration with the pace at which Sheriff’s officials have responded to subpoenas for documents, even threatening to hold Sheriff Sandra Hutchens in contempt of court if records were not produced. Sanders has also accused the department of withholding and delaying the production of documents, and even shredding some records, related to the use of jailhouse informants and that should have been provided to the court.

“Are there lawful orders in place? Yes. Has the Sheriff complied with them in a timely fashion for the past few years? No,” Goethals said. “And that brings us to the next question, ‘why not?’”

Why the Sheriff hasn’t complied with the orders is the central question of the hearing, where on Wednesday Sheriff’s Deputy Seth Tunstall and Lt. Dave Johnson both invoked their Fifth Amendment right against self-incrimination, becoming the third and fourth Sheriff’s Department employees to do so in this proceeding.

“I would say it is disappointing at best, that an active duty Orange County Sheriff’s mid-management supervisor who comes into court wearing uniform and is currently still employed in the jail…feels compelled to invoke his Fifth Amendment right,” Goethals said of Johnson. “I don’t know what that says about what’s going on across the street (in the Sheriff’s Department.)”

Johnson’s attorney, Jan Christie, who is representing several Sheriff’s deputies, said Johnson’s invocation of the Fifth Amendment is not an acknowledgment of guilt.

“The Fifth Amendment is there to be used by innocent people who may be caught up in the controversy,” Christie said. “We’re certainly denying any guilt.”

All four Sheriff’s personnel who have invoked their Fifth Amendment privilege have worked in the unit that deals with jail informants, known as Special Handling, and have knowledge of the special handling log, an electronic document of notes kept by special handling deputies.

Tunstall’s decision to take the Fifth was not unexpected.  In a 2015 ruling, Goethals wrote that Tunstall and fellow deputy Benjamin Garcia “either intentionally lied or willfully withheld material evidence from this court” in previous testimonies about the existence of TRED, an internal Sheriff’s Department system for tracking inmates. He also invoked his Fifth Amendment privilege in another trial.

While Tunstall avoided testifying, Johnson answered questions after the judge granted a request by Murphy to give Johnson immunity from prosecution based on his testimony.

Johnson testified the special handling log existed before he served as a special handling deputy between 2004 and 2006. He was unsure whether it still existed or whether he revived its use among deputies when he returned to the unit as a sergeant in 2008.

He also claimed, despite memos written by special handling deputies that suggest the unit cultivates, recruits and manages jail informants, that the unit does not engage in those activities, but rather acts as a “facilitator” between informants and investigators for the department or outside agencies.

Toward the end of the hearing, Goethals said he was skeptical of Johnson’s testimony.

“The fact that a witness may deny something doesn’t mean I find it credible,” Goethals said. “This witness has some credibility challenges.”

Goethals referred to a memo that once hung on the wall of the Special Handling office, which instructed deputies to “cultivate and recruit” informants.

“That memo, which I’ve read many times, also indicates that it was hanging on the wall in the Special Handling office, and this witness says he never saw it even though he was the sergeant for two years,” Goethals said. “I’m not as dumb as I look.”