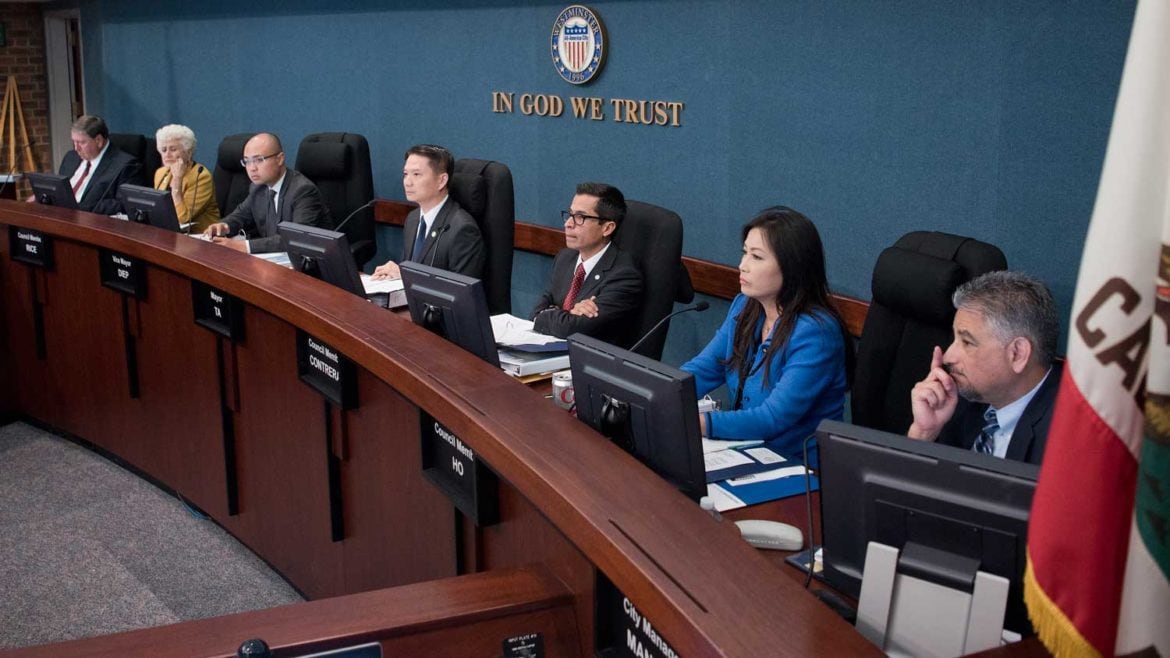 A Westminster employee last month filed a lawsuit against the city claiming she was pushed out of her role as Assistant to the City Manager by the best friend of a former city manager’s son – the sixth legal challenge from an employee to be filed against the city since 2011.

The number of employee claims against Westminster has caught the attention of the city’s insurance pool, the California Insurance Pool Authority (CIPA), which recently raised the city’s general liability insurance deductible from $350,000 to $500,000.

“Per Janet, there seems to be ‘a lot of activity with our City;’ she has read the depositions in these lawsuits and believes there is a trend leading to some of these discrimination challenges we have been facing,” wrote Human Resources director Mike Harary in a January 2016 email, in which he summarizes a phone call with the insurance pool’s Executive Manager, Janet Kiser. “These claims, as filed against the City, create ‘lots of potential liability for CIPA.’”

“She also suggested that all the other CIPA members are going to be ‘on the hook’ for higher premiums due to our agency’s claims exposure as well,’” Harary wrote. Voice of OC obtained the email as part of court discovery in a public records lawsuit against Westminster.

City Manager Eddie Manfro said he did not believe the number of lawsuits indicates a “systemic” problem within the city.

Meanwhile, Dennis Wagner, a Riverside-based attorney who has represented four employees against the city, said the city has wasted taxpayer dollars defending lawsuits instead of “looking internally as to why these lawsuits keep getting filed.”

“If the City had management personnel who were competent and allowed their employees to perform their job positions without political interference or petty conflicts from management, the City could become a well-run city,” said Wagner.

A Growing Number of Employee Complaints

According to Harary, Kiser’s concerns were sparked by a $3.5 million judgment awarded to three police officers who sued the Westminster Police Department in 2011, claiming they were denied special assignments such as SWAT or detective duties, and instead assigned “mall duty” at a substation at the Westminster Mall.

The judgment included $2.1 million in punitive damages, which are intended to discourage such conduct from happening again. The city is appealing the decision and has yet to pay the settlement.

“Janet’s opinion is punitive damages are indicative of systemic problems with WPD [Westminster Police Department],” Harary wrote of Kiser in his email.

Then in 2013, a police officer, Matthew Edinger, sued the city claiming he was retaliated against by department officials and passed up for promotions and assignments because he gave statements in 2010 during an internal investigation, and later in a court deposition, supporting a co-worker’s discrimination claim.

In early 2016, former Police Chief Kevin Baker filed a claim against the city, an administrative precursor to filing a lawsuit. The substance of Baker’s complaint is unknown, as the city has refused to release the document. Voice of OC is suing the city for its disclosure.

Baker, who was appointed chief in 2012, retired on May 1 after more than six months on medical leave. In late May, the city executed a $100,000 settlement to resolve Baker’s threat of litigation and a $400,000 contract to settle a worker’s compensation claim.

Also in 2016, a Public Works employee named Kevin Beach filed a complaint, threatening to sue based on claims that he was subject to “unfair and unmeritorious comments by an elected official” and wrongfully placed on a twenty-hour suspension without pay, and wrongfully denied pay, according to his settlement.

Although Beach never filed an official claim, he was awarded a settlement in May 2017 in which he was given a 10 percent pay raise.

Then last month, Housing Coordinator Tami Piscotty, who was originally hired as the assistant to the city manager in 2005, filed a lawsuit against the city alleging she was discriminated against and pushed out of her role by a younger, male employee who was allegedly the best friend of then-city manager Ray Silver’s son.

Silver Tuesday called Piscotty’s claims about him inaccurate and said he was the “primary person who protected, defended and supported her from the constant complaints from then Mayor Margie Rice.”

According to employment records provided by the city, Simmons was first hired as a paid intern in 2007 and was hired full-time as an Economic Development Specialist in 2009.

Piscotty claims in her lawsuit that Silver began transferring several of her job duties to Simmons, because “Mayor Margie Rice liked Simmons more than” her.

“Due to the stress of seeing her job duties diminished and given to an employee 20 years younger than her and after constant berating by City Manager Silver, Plaintiff [Piscotty] was forced out of her position as Assistant to the City Manager and transferred to the off-site offices of the Housing Division,” at the Westminster Mall, the complaint reads.

In 2011, Simmons was promoted to Assistant to the City Manager, according to employment records.

Simmons was promoted to Assistant City Manager in 2015, eight years after he was initially hired as an intern.

Piscotty also claims to have reported illegal activity, including embezzlement and violations of conflict of interest laws, but that “she was kept off-site to be kept quiet.”

Both Simmons and Manfro declined to comment on Piscotty’s lawsuit, citing the ongoing litigation.

Councilman Sergio Contreras said he “had no clue” about the increase in the city’s insurance deductible. He said he has not witnessed any concerning behavior firsthand.

Other city council members did not return calls for comment.

Harary, the HR director, said Kiser’s comments were made out of “an abundance of caution.”

“Her role as General Manager of CIPA is first and foremost to protect the pool, and so her comments to me were simply her way of sharing her concerns with me at that time in looking out for the pool,” Harary wrote in an email.