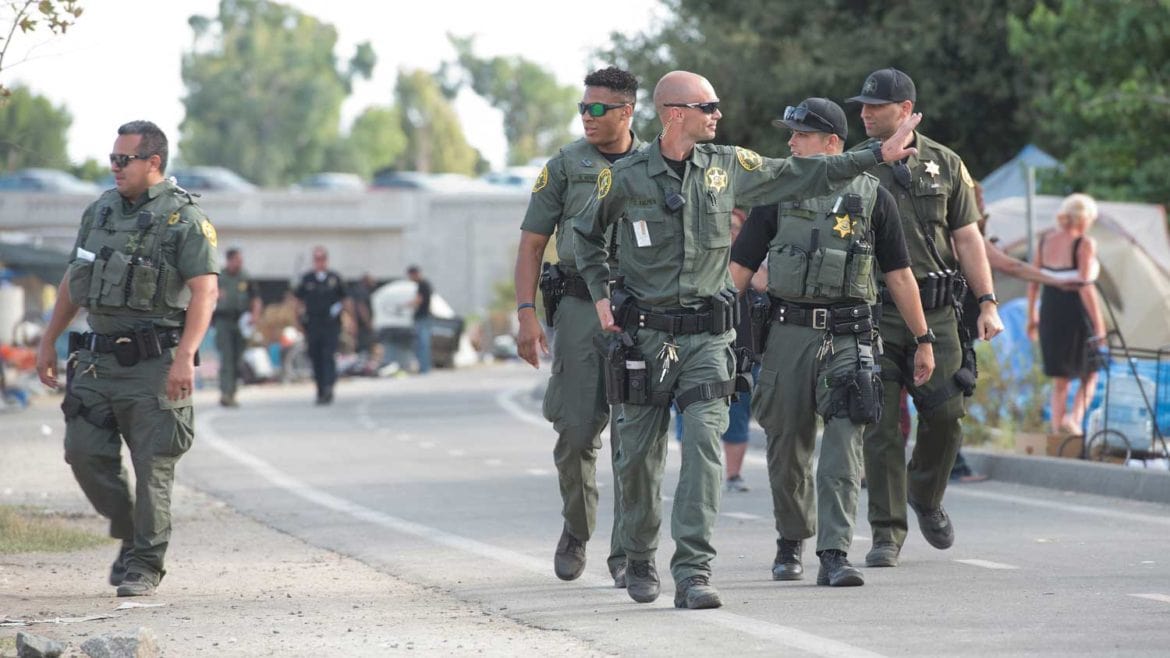 Orange County’s largest homeless camp, home to hundreds of people living along the Santa Ana River near Angel Stadium, has a new set of visitors: twice-a-week patrols by a contingent of two dozen sheriff’s deputies and other law enforcement officers.

As the encampment has grown – over 400 people now live there – so has a sense of permanence. The city of tarpaulin tents now includes several carefully-arranged front lawns delineated by rocks and fences of salvaged wood; tarps arranged to shield living areas from prying eyes; and even a neighborhood pet cemetery where people have buried dogs, cats and lizards.

County supervisors and cities that border the river received a deluge of complaints from residents over the past few months, many who reported finding trash, needles and drug paraphernalia along the riverbed. Cyclists said they’ve feared for their safety while biking along the trail. In some spots, there are strong, unpleasant odors, possibly because there are no bathrooms.

A Change.org petition by an Anaheim resident calling for enforcement of anti-camping laws on the riverbed garnered more than 13,500 signatures.

That pressure ultimately led to new Sheriff’s Department patrols by two-dozen law enforcement officers, which began last week and will take place every Friday and Saturday. Previously, there were no regular law enforcement patrols of the riverbed encampment. 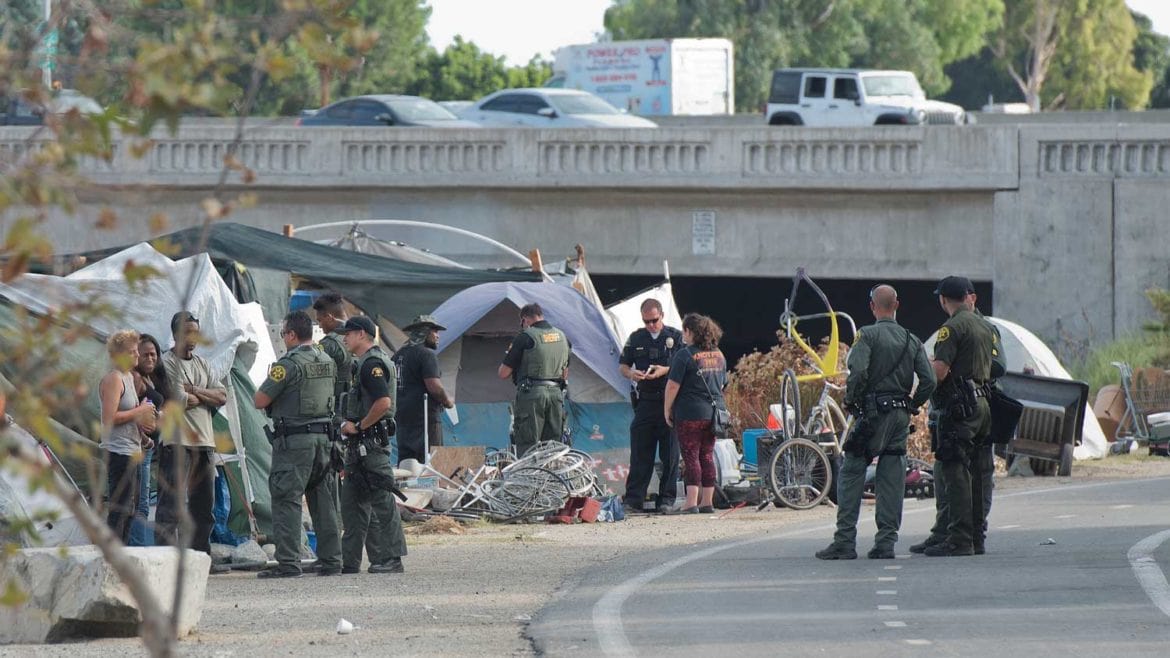 Some were hopeful police would do a more thorough job of investigating violence committed against homeless people, including sexual assaults. But there also were concerns the stepped up law enforcement presence was preparation for clearing out the encampment altogether and scattering homeless people into other areas.

“I’m okay if it’s helping us out, not pushing us out,” said 32-year-old Angel Noel, who has been homeless off and on since he was 16. “You don’t want us on the corner, next to your businesses, next to your events. But where do you want us to go?”

On Friday, the deputies arrested three people for probation and parole violations, cited one person for narcotics, and spoke with over 100 people at the riverbed, said Grangoff.

On Saturday, there were no arrests, but deputies did issue two additional narcotics citations and spoke with another 50 people, Grangoff said.

County and city officials have also given mixed signals on whether the encampment will be cleared.

Although county Supervisor Todd Spitzer declared in a Sept. 11 TV interview the county would be “closing the riverbed and not allowing people to habitate there,” his colleagues on the Board of Supervisors would not commit to establishing a specific timeline for clearing out the encampment.

Meanwhile, the Anaheim City Council has called the homelessness situation on the riverbed an emergency and pledged to ramp up outreach efforts before eventually clearing out the area, although they have not set any deadlines or earmarked funds for the effort. 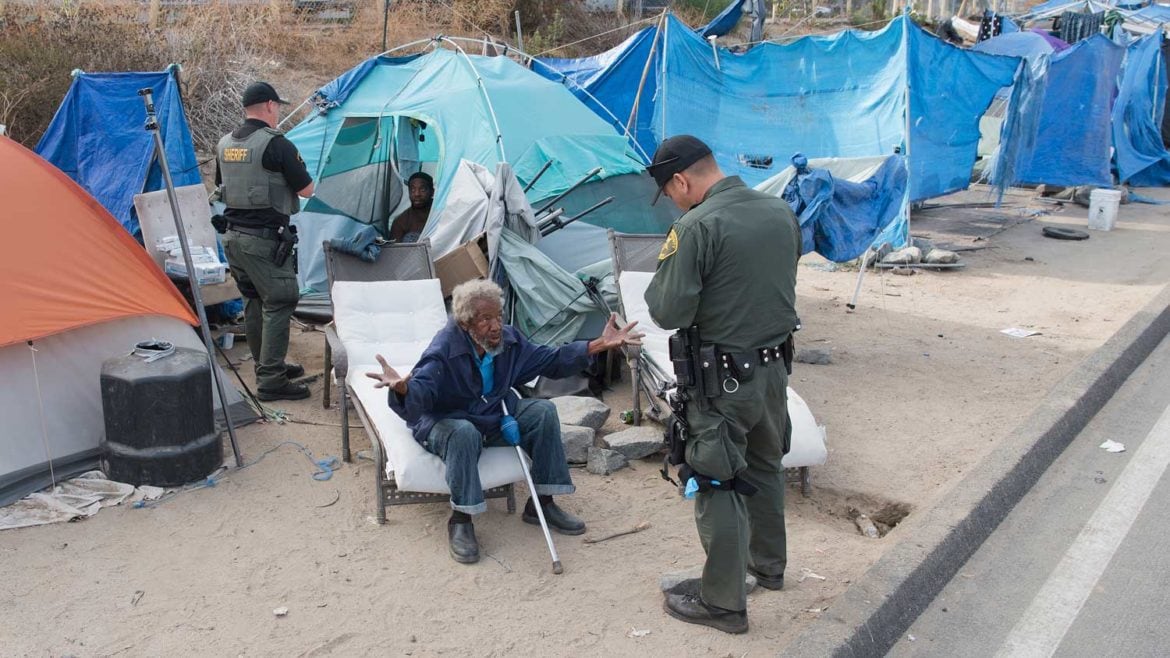 At the riverbed encampment, rumors spread Friday that law enforcement was planning to clear out the area the next morning. But sheriff’s officials said that wasn’t true, and there were no reports of such an effort actually taking place.

Sheriff’s Sgt. David Sawyer, who was overseeing the patrols on Friday, said enforcement of the riverbed would occur in “phases,” starting with twice weekly assessments of the population.

“Every single media person is asking me about fear and anxiety from homeless people that we are going to go down here and nuke the place,” Sawyer said. “We’re not out there throwing out camping citations.”

He said the Sheriff’s Department would focus on targeting a “criminal element” among the homeless population and “focus on victim crimes.”

“Our ultimate goal is to try to clear out the riverbed. But we’re going to provide services,” Sawyer said. 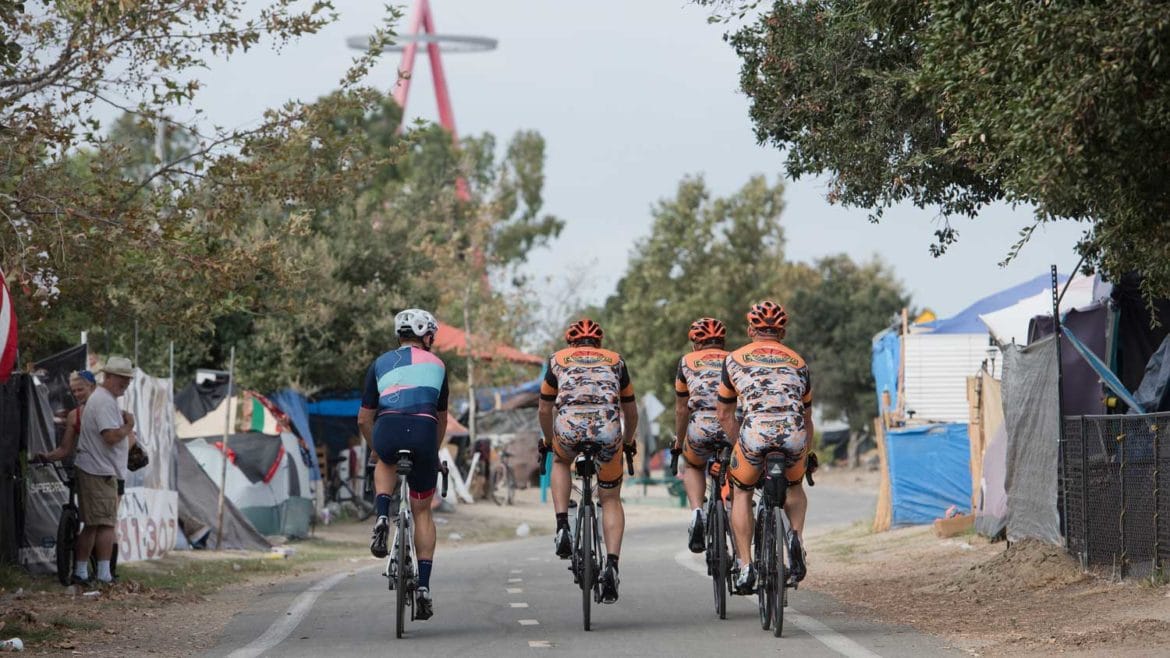 A group of bike riders pass through the Santa Ana Riverbed.

Noel questioned whether those offers for help will fit the actual needs of homeless people.

Noel, who has a dog and wears a “best friend” necklace shaped like a paw print, worries about himself and several other residents with pets who aren’t allowed to stay in shelters.

He compares leaving behind his dog to abandoning a child or significant other.

“I’ve been told that I refuse help because I’m not willing to leave my dog,” Noel said.

He’s not sure where he will go if he needs to leave the riverbed.

“I’m trying not to think about it. I’ve got nowhere to go, no money, and I’ve got to figure how to sustain the both of us,” Noel said. 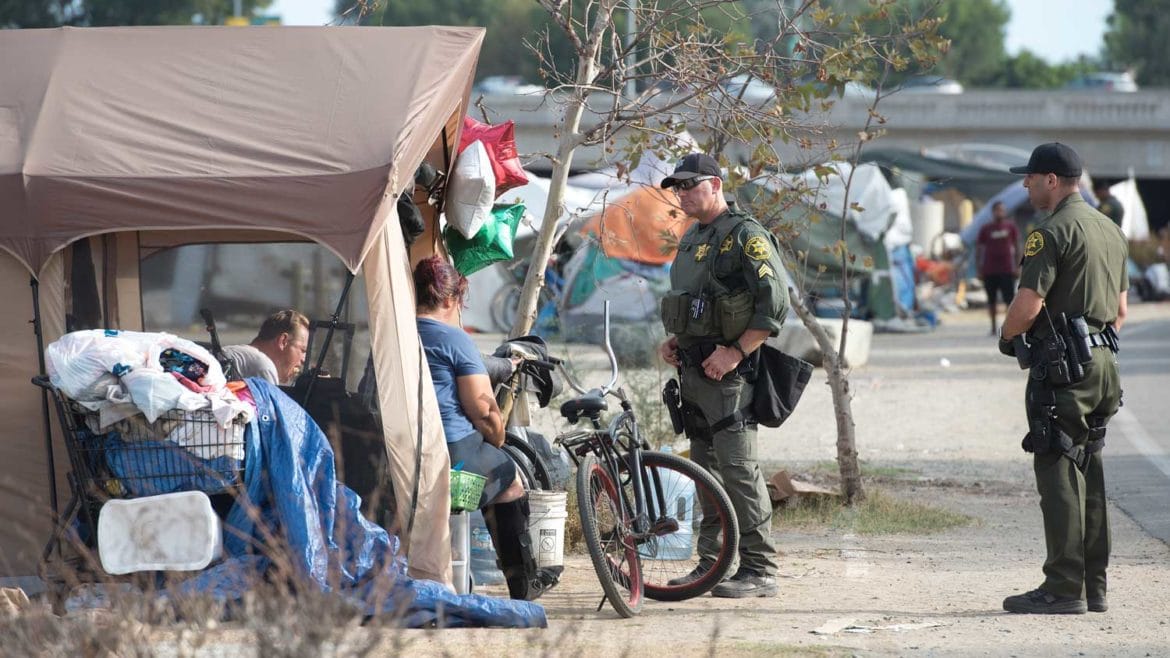 Brooke Weitzman, an attorney who obtained a federal court order protecting homeless people’s property at the riverbed, argues there are practical and legal reasons for the county not to clear out the encampment.

Federal court precedent prevents the county from forcing homeless people out when there’s no reasonable alternative for them to go to, Weitzman said as she monitored the situation Friday. And clearing out the riverbed would push homeless people into other parts of the county, she noted.

One in five Californians lives in poverty, the highest rate in the country, according to new data from the U.S. Census Bureau, the Sacramento Bee reported.

County and city officials acknowledge part of the problem is a shortage of housing. And while county supervisors officially have a goal of expanding housing and supportive service options for homeless people – existing shelters are essentially full – there have been no commitments lately to follow through on that.

Lacey Piercy, who has been homeless at the riverbed for about a year, said there are some bad apples living along the river but believes that many want housing and would work if they had the opportunity.

She points out that two of her neighbors work at a Ralph’s Supermarket and another works at a gas station.

“If more people gave us a chance, I think we would do it,” Piercy said.