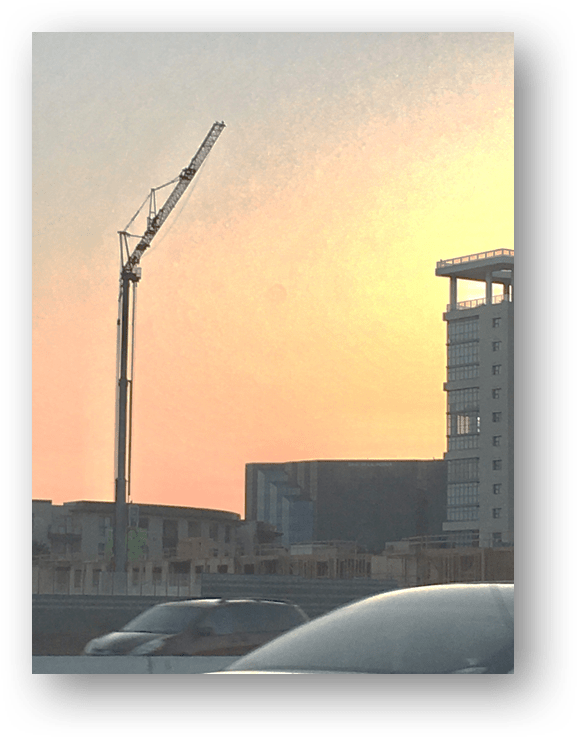 Jamboree with Traffic in the Foreground

No, not the fowl, but the construction crane that can be seen dotting the skyline across the city. While construction and development are certainly markers of progress, a lack of traffic and infrastructure planning strangles the residents with traffic, poor air quality, overcrowded schools, and many other impacts of unchecked growth.

While the ballot initiative was still in the hands of the City Attorney and well before the ballot title and summary was publicly available on September 5th, there was a review of the Responsible Growth Initiative that misrepresented the effort as anti-growth. The goal of the initiative is to preserve the quality of life in Irvine and restore the citizens’ voices into the democratic process – voices that have been commandeered by paid lobbyists from the development community.  This sensible ballot measure intends to promote responsible growth in the city of Irvine by ensuring the appropriate infrastructure, much like similar measures in the neighboring cities of Newport Beach and Costa Mesa.

Like the initiatives in our neighboring cities, the measure simply states that if a proposed development’s size is above a threshold, it must be voted upon by the residents in order for building to commence. In other words, instead of every single building project being rubber stamped by City Council, the residents will finally get a say as to whether we want thousands of housing units or business units built with the commensurate additional traffic, pollution, etc. If a proposed project is supported by the current infrastructure and the residents believe it is a good idea, the project moves ahead. If a proposed project will stress areas that are already at their limits, the residents can vote against the project and the project will then not move forward. It is that simple.

Unfortunately, my experience has shown that we cannot leave it in the hands of City Council, the Traffic Commission, or any other city employee to determine when things should not be built. Every day, traffic slows to a crawl through Irvine on the 5 and 405 freeways as well as the major arteries throughout the city. There are over 40 students per class in some schools. A smog layer hugs the hillsides by Portola. These problems exist today, and that does not even account for the 10,000 additional homes (translate that into over 20,000 car trips!!) that City Council has already approved nor does it include the 9,000 cars that will be added as a result of the recent Land Swap. Because of their close ties to the developers, City Council will approve every building proposal and allow developers to build up our city until there is no land left to build on. Some projects add great benefits for our city, and with this measure those projects can still be built. This initiative only gives residents the opportunity to have a say in the process. Instead of allowing City Council to modify Irvine’s Master Plan based on their self-interests, let the voters decide on the projects that are important to them.

The traffic commission and the 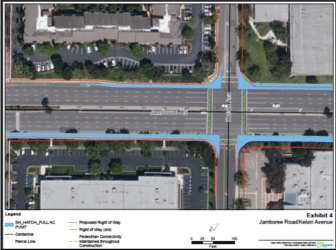 commission is supporting the widening of Jamboree into a 10 lane freeway right through the middle of the village of Irvine.  See the map below that shows the widening right up to the dwellings. I don’t think there’s room for a tree.

They are stuck on discussions of signal timing and pedestrian bridges that, while are lovely, are not going to make a dent in the thousands of homes and apartments that are bringing untoward amounts of congestion, pollution and overcrowding in our schools.

There was an email survey that attacked the proponents and appeared to come from the “City of Irvine” but likely again commissioned by the development community. A city should not be in the business of determining how likely a proposed ballot measure is to get the requisite number of signatures. The democratic process is independent of the city and the city should be ruled by it, not intertwined in the politics. One has to wonder – why does a ballot initiative giving a voice to the residents have City Council and the development community running scared? Clearly, they have something to protect and it’s not the citizens of their city!

The Irvine general plan states, “Coordinate the pace of development with traffic improvements.” Has city council upheld this plan? In this email survey they ask about the job that City Council is doing. A few questions later they proudly profess an additional 10,000 homes approved by City Council that have yet to be built. With the general plan as a backdrop, how do you think the Council is doing?  Why is it that Irvine City Council is singularly charged with deciding on the Great Park? Last Tuesday, we heard from the dais that there will be retail on the Great Park. Let the voters decide on the projects that are important to them and not the pocket books of our City Council.

Karen Jaffe is a representative for Irvine for Responsible Growth, a citizen organization that is promoting a responsible growth plan for Irvine. Our objective is to ensure that the voices of the residents of Irvine are heard over the wallets and greed of the developers. Traffic was THE NUMBER ONE concern for the 2016 elections and we aim to ensure that the elected officials of our city represent the tax paying, voting citizen. They are circulating a petition to put a RESPONSIBLE growth initiative on the November 2018 ballot and can be reached on FaceBook, www.irvineliving.org or at stopirvinetraffic@gmail.com.