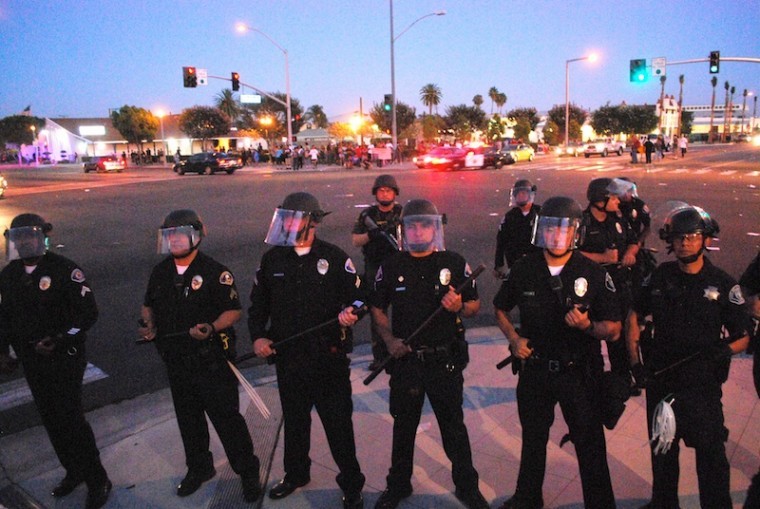 Beefed-up citizen oversight of the Anaheim Police Department will be considered by the City Council Tuesday with the underlying issue a report by the American Civil Liberties Union of Southern California (ACLU), which found Anaheim to be among the nation’s worst cities for deaths at the hands of police.

Council members Dec. 5 are scheduled to discuss the creation of a new police review board to replace a citizen review commission, the Public Safety Board, created in response to July 2012 police shootings that killed two young Latino men and sparked civil unrest and riots in front of City Hall.

The discussion comes on the heels of the Nov. 20 release of the ACLU report which found Anaheim ranks ninth among 60 of the largest U.S. cities for police-involved deaths. Anaheim Acting Police Chief Julian Harvey disputed the findings, and said the city actually ranks 27th.

Critics of the Public Safety Board – a pilot board that ran from 2014 to 2016 – contend it lacked purpose and authority.

Unlike a city commission that reports to the City Council, the public safety board had no policy-making authority or subpoena power, and only made recommendations to the city manager. Its main function was to provide a space for public input.

Now activists are calling for the council to turn the public safety board into a robust police oversight commission – one with dedicated funding, the ability to independently investigate complaints and unfettered access to police department records.

Donna Acevedo, whose son Joel Acevedo was killed by Anaheim police, has been coming to city council meetings since her son’s death on July 22, 2012.

“I think it’s a lot of your fault that so many people are dead now,” Acevedo told the City Council on Nov. 21. “We’ve been coming here asking for accountability for years…and I know it seems gruesome, but every single time I come here I picture our dead young men between us.”

“You need to understand – this is really serious. People are losing their lives,” Acevedo said.

Proposals for a New Police Review Board

The police review board, as proposed by city staff, would include seven members selected by lottery. Members would be residents of the city’s six council districts, with one member selected at-large. Members can’t be current or former law enforcement.

The board still would report to the City Manager, not the City Council.

According to the staff proposal, the police review board would have 19 main responsibilities, including new roles that expand it beyond the Public Safety Board:

But the proposal falls short of what many activists are asking for.

The ACLU report argues that the body should have the authority to independently investigate complaints of misconduct; be able to recommend findings and discipline; have its own dedicated budget and have “enforceable and unfettered” access to police records, such as police disciplinary records and body camera footage.

None of those recommendations are mentioned in the city staff report.

What Can a Police Oversight Commission Do?

In the universe of public safety boards, oversight can take many forms. Some have civilian investigators who can hold hearings and investigate complaints of misconduct; others review the quality of police department investigations and others use a professional auditor to conduct oversight.

In the city of Riverside, the oversight board reviews citizen complaints and investigation reports, and votes to either approve or reject the findings. The Berkeley Police Review Commission, which was created in 1979, was the first to give commissioners the ability to independently investigate complaints.

In Oakland, voters approved a measure in Nov. 2016 that would create a powerful new police oversight board with the ability to investigate and discipline police officers for misconduct, help set department policies and even potentially fire the police chief.

A 2016 review of the nation’s 50 largest police departments found civilian review boards in 19 cities are given subpoena powers, while only six have some ability to recommend disciplinary actions.

In Anaheim, the Public Safety Board was responsible for reviewing the efficiency and effectiveness of police and fire services – things like reviewing budgets, staffing levels, service delivery, policies and practices and critical incidents like police shootings.

During its two-year pilot run, the board met 12 times.

The board largely relied on an external auditor, Michael Gennaco, to provide formal oversight. Gennaco, of the Office of Independent Review Group (OIR), was contracted by the city to review complaints, in-custody deaths, uses of deadly force and administrative investigations for officers with the rank of sergeant or higher.

Gennaco reported his findings in periodic public reports, and made 57 policy recommendations, 42 of which ultimately were implemented by the police department.

Joseph Brann, a consultant hired by Anaheim to evaluate the board’s effectiveness, acknowledged the board largely existed to provide a forum for public input and discussion.

“It’s evidence that the public safety board was never intended to serve as a policy making or decision-making body,” Brann told the Public Safety Board in December 2016.

In its November report, the ACLU of Southern California criticized the Public Safety Board as lacking the authority to provide any meaningful oversight.

The ACLU report noted that “final policy decisions remained with the Chief of Police without regular review of policy changes by PSB [Public Safety Board] or City Council” and that the information the board received was limited by the city “out of concerns for confidentiality of internal investigations.”

Rather than reviewing specific complaints, the board heard public grievances at meetings, rendering “PSB members powerless in addressing complaints and the public disillusioned with the purpose of the PSB,” the ACLU report states.

The Anaheim Police Association – the second largest political campaign contributor in city council elections, spending at least $180,362 in 2016 — has opposed recommendations that police be excluded from the board’s membership. They also have argued citizens with no investigatory experience should not be given the ability to issue subpoenas and conduct investigations.

Edgar Hampton, president of the union, said the department hasn’t gotten enough credit for the number of changes its made since 2012 – from the introduction of body cameras to community policing efforts.

He noted that of all the arrests made in 2016, Anaheim Police Officers used force in 132 incidents.

“Even when we’re making arrests, we are using force less than one percent of the time,” Hampton said. “At some point you have to be cognizant that…there have been many efforts to improve use of force and training. We’ve come light years beyond what we initially did.”