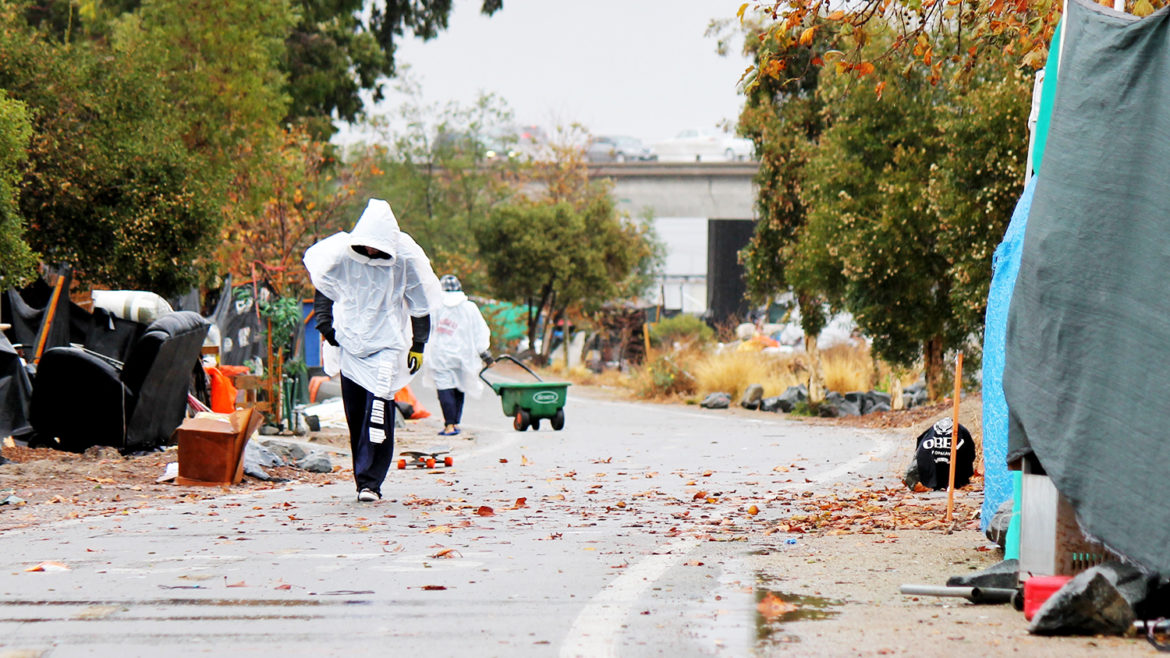 A man walks along the large homeless encampment between Angel Stadium and the Santa Ana River during a day of heavy rains, Tuesday, Jan. 9, 2017.

“It’s gonna be a nightmare” because the supervisors are putting homeless people into various communities without shelter, said Margaret Sharpe, who was among several critical commenters at the supervisors’ regular meeting Tuesday.

“You have created a lose-lose situation for all,” said Pat Davis, an Anaheim resident who has served as a legal observer at the riverbed camp, in comments to the supervisors.

“You are ignoring your own data” showing a large majority of homeless people would accept services, Davis added.

Another speaker, Jestin Samson, said supervisors have been told “time and time again” they could solve the issue by funding the county’s own plan to end homelessness, which calls for expanding affordable housing options. But he said the supervisors have shown “no interest” in it.

Supervisor Shawn Nelson was the only one of the five supervisors who responded to the public criticism during the meeting. He said parts of the critiques were valid and other parts weren’t.

“There’s some informed criticism, and some not so much,” Nelson said, without giving details. “But you know, I take it to heart. We need to be doing everything we can to move dollars that are available [into affordable housing development], and start getting some results on the board.”

Nelson previously had warned about the eviction, telling community members in October that, with few shelter beds available for riverbed dwellers, homeless people would be pushed out into Anaheim.

“Unfortunately, the status that we’re in right now, if you push people out you will end up dealing with it in the city,” Nelson, whose district includes the Angel Stadium camp and most of the city of Anaheim, said at the time.

Tuesday’s supervisors meeting came as heavy rains drenched Orange County, including the riverbed encampment. Many at the camp retreated into tents or wore plastic ponchos to block the rain.

As Nelson predicted in October, county officials announced after the new year began that they will be shutting down the homeless encampment on Jan. 22. Those who remain could be cited for trespassing, according to the county.

County officials say the eviction is needed for a three-month project to clean up the area, including removing waste and debris, and to perform delayed maintenance to the flood control channel.

There are few options for the hundreds of people who are currently camped there. The county has shut down the rest of the riverbed to overnight camping, and the county’s two shelters that are open during the daytime have had as few as 18 beds available in recent days.

Supervisor Andrew Do, whose central county First District has one of the largest homeless populations, was unanimously selected by his colleagues Tuesday to be chairman of the board for 2018.

For months Nelson had supported temporarily relocating homeless people to empty county land, such as 100 acres the county owns in Irvine. But a majority of his colleagues on the five-member Board of Supervisors didn’t support it, according to Nelson.

County officials say they don’t have a recommendation for where the hundreds of homeless people at the camp should go.

“The county will not be directing individuals where to relocate,” said county spokeswoman Jennifer Nentwig.

But to remove barriers for people to access services, she said, the county will provide free transportation to the cold-weather armory shelters, free kennel stays for pets and free storage of property for up to 90 days for people willing to accept assistance.

After months of delays, the supervisors acted Tuesday on a commitment they made last June to devote an extra $5 million in state mental health dollars toward new permanent housing with support services for homeless people with severe mental illnesses.

That money will fund 99 new housing units in Santa Ana, enough for about 2 percent of the county’s overall homeless population of more than 4,800 people. But those housing spots won’t be available for at least several months, and most people at the riverbed won’t qualify for it because they don’t have a severe mental illness.

The most recent official count of people living at the main riverbed camp near Angel Stadium found 422 people there in August. That’s believed to have grown significantly, after the county shut down encampments elsewhere on the riverbed, such as Fountain Valley, which prompted more people to join the main camp near Angel Stadium.

The county hasn’t released updated figures for the number of people living at the riverbed, though a new count will be performed before the Jan. 22 deadline for people to leave, according to the county.

The encampment, which runs between Angel Stadium and the Santa Ana River, has turned into one of largest homeless camps in the United States as local cities criminalize homelessness through anti-camping laws. Most Orange County cities have such bans, including Anaheim, Orange and Santa Ana.

Police have told homeless people they would face citations for camping in their cities but not at the riverbed, according to a lawsuit filed last year by the American Civil Liberties Union.

At the same time, residents and businesses have raised concerns about crime at the riverbed encampment, such as thefts and drug use, as well as finding needles and human feces and urine in private businesses and residential areas.

Local restaurants have reported issues like homeless people showering in restrooms, yelling at employees, and doing drugs in the restrooms. And cyclists who frequent the Santa Ana River Trail say they now fear for their safety.

A survey commissioned by the county in August found that 81 percent of people at the camp by Angel Stadium were willing to accept case management services to help them out of homelessness – equivalent to at least 340 people at the camp.

But only 18 to 33 beds were available each night in the county’s year-round shelters so far this year, according to county data. An additional 209 to 283 beds have been available at the county’s cold-weather emergency shelters at National Guard armories, though people have to leave during the day and are limited to two handheld bags of personal belongings. The armory shelters, which don’t allow pets that aren’t service dogs, are also closed from April to November.

Leading the public charge for clearing out the encampment has been Supervisor Todd Spitzer, who is running for district attorney and says in his campaign materials that he is “Solving Homelessness.”

Pointing to a survey conducted by sheriff’s deputies, in which 83 percent of people at the Angel Stadium camp reportedly declined services offered by the deputies, Spitzer has characterized the encampment as being full of people who wouldn’t accept shelter or help even if it was offered.

Speaking on the John and Ken show on KFI-AM last week, Spitzer said: “Everybody says there’s a shortage. But for goodness sake, when I now know that nine out of 10 [people] who are living on the riverbed are not willing to take services when they are offered, I don’t think I have a legal duty, and ethical duty, a moral duty, or a financial duty on behalf of he taxpayers to pay for beds no one says they will use.”

But the opposite of the Sheriff’s Department survey was found when the question was asked by social services staff with county contractor City Net. That August survey found 81 percent of people at the camp were interested in case management services.

Brooke Weitzman, an attorney who won a settlement against the county last year over seizure of homeless people’s property at the riverbed, has said the sheriff’s survey results are influenced by the way deputies approached people.

“I’ve seen the sheriff’s [deputies] visit the riverbed. They arrive in an unmarked van, and they pile out in full kevlar uniforms, which is pretty scary” for homeless people, Weitzman said in an October interview with Voice of OC.

Public commenters took Spitzer to task on Tuesday, saying he’s been lying to the public about homeless people refusing services for the sake of his own political ambitions.

“Todd does nothing but lies. He lies in public, he lies in print media, and he lies on the radio,” said Anaheim resident and homeless advocate Jeanine Robbins.

Spitzer didn’t respond to the criticisms.

Another activist, Mohammed Aly, said homeless people would be relocating to the sidewalks in front of the supervisors’ homes, a place he said they have a legal right to be.

“I will be inviting people to take residence…in the neighborhoods around your houses,” said Aly, a lawyer who leads the Orange County Poverty Alleviation Coalition.

“They should be camping in front of your houses on public sidewalks, where they have a completely protected Eighth Amendment [right] to be at those places….free of punishment for camping outside when there is no place else for them to go.”

The county government is the lead public agency that receives federal and state funding to address Orange County’s homelessness, mental health, and drug addiction issues. It takes three supervisors – a majority – to either approve or reject policy directions, such as setting up emergency shelters on county land or ordering the riverbed cleared.

The supervisors seemed to changed their position somewhat about affordable housing Tuesday, publicly urging for the first time that the county be proactive in finding out about nonprofit housing projects that the county could award state funding.

Spitzer and Nelson specifically mentioned the nonprofit Jamboree Housing Corporation as an affordable housing developer with a strong reputation.

“We should be checking in on such a regular basis that it isn’t possible” for the major affordable housing developers to have a project that’s not “instantly” being evaluated by the county for possible funding, Nelson said.

“I think the process should be much different about how we’re getting money on the street” for homeless housing projects, Spitzer said. “And I’m sensing it’s not completely functional.”