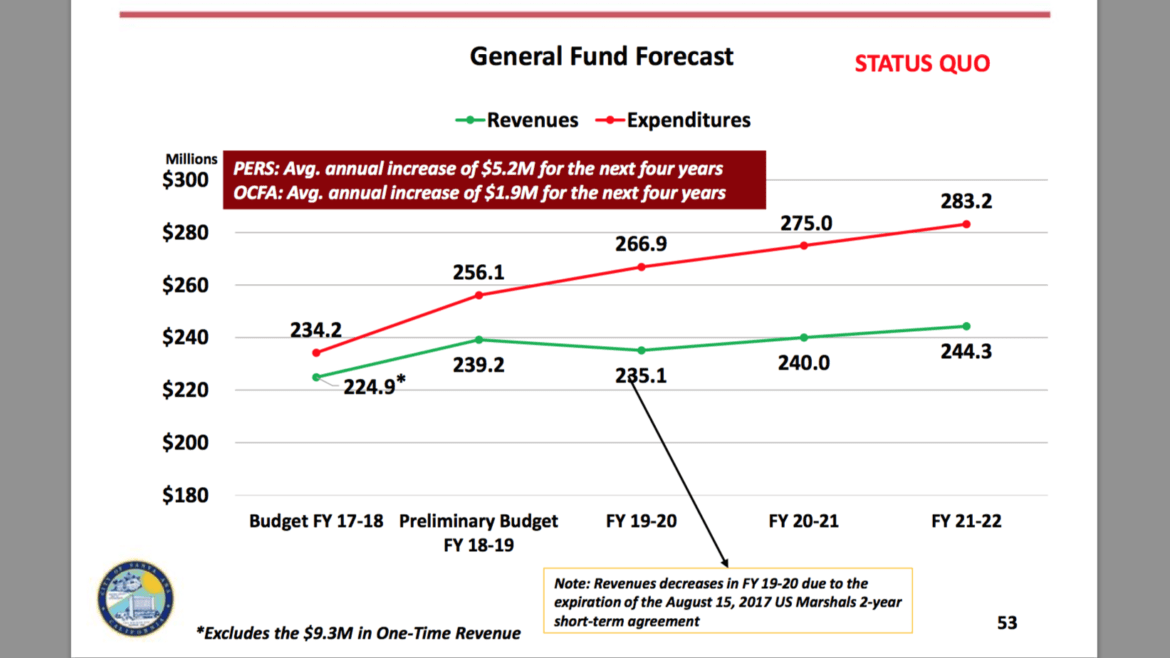 Santa Ana's finance staff are projecting major budget deficits in the future. Image from city staff's presentation this week to the City Council.

Santa Ana is facing a projected $17 million budget hole in the upcoming fiscal year, with city officials attributing most of it to skyrocketing pension costs and employee raises the City Council awarded last year, the majority going to police officers.

The budget pressures are prompting warnings from the city manager that services may have to be cut back, despite growth in tax revenues. The funding gap is projected to grow  to $40 million in five years.

He said other cities also are struggling with pension cost increases, largely for three reasons: state pension officials lowering their assumptions for investment earnings, demographic changes in the workforce, and growth in employee salaries and benefits approved by city councils.

As a larger share of city spending goes toward pensions, less will be available for existing city services, the city manager said.

“Naturally as that [pension] slice of the pie begins to grow, it starts squeezing out all the other elements in terms of…what we can do as a city,” Godinez said.

Despite overall growth in revenues to the city this year, finance officials project a $9.3 million budget gap in the current fiscal year, which ends June 30. The shortfall could require officials to draw from the city’s reserves to make ends meet.

And city officials project it will get worse, if major changes aren’t made to boost revenue, curb the growth of costs, or both.

Next fiscal year, the projected budget hole balloons to $17 million, followed by a $32 million gap the following year. Five years from now, in the fiscal year starting in mid-2022, the gap grows to about $40 million.

Future projections do not take into account millions of dollars in additional costs officials say would push the budget hole even wider: future rounds of employee raises the City Council typically approves each year, and a planned phase-down of the city’s potentially illegal use of trash and sewer fees for general services, which could widen the gap by as much as $15 million per year.

Most of the increased city expenses in the next fiscal year are from increased pension costs and employee raises the City Council authorized in the second half of 2017, according to city finance officials’ presentation at Monday’s meeting. Two thirds of the raises went to Police Department employees, mostly officers.

Before last year’s raise, Santa Ana police officers’ median compensation package was about $213,700 per year, including $125,800 in pay and $87,900 in health and retirement benefits. It was more than their counterparts made in Anaheim and Irvine, the other two largest cities in Orange County.

Then, last July, following an election in which the officers’ union was by far the largest campaign spender, the City Council authorized a $2.7 million raise for officers at the same time city finance officials projected major budget shortfalls. At least a third of the officers received raises of 8.1 percent or more.

Pension officials assume cities grow their employee costs by about 3 percent each year, said Amy Morgan, a spokeswoman for CalPERS, the state pension agency that manages pensions for the vast majority of California cities, including Santa Ana.

Any growth beyond 3 percent prompts cities to have to pay higher contributions into the pension system, she said.

In Santa Ana’s case, the city’s labor costs have grown by 5.5 percent on average over the past five years – nearly double the standard used by CalPERS.

It’s been even higher lately. Last year, Santa Ana’s labor costs grew by nearly 10 percent, or more than three times as much as the CalPERS standard.

Santa Ana’s pension payments are projected by city staff to roughly double over the next five years, adding about $30 million in annual costs to the city’s general fund. Most of the money Santa Ana pays toward pensions is for current and former police employees, who make up fewer than a third of the people in the city’s pension plan. 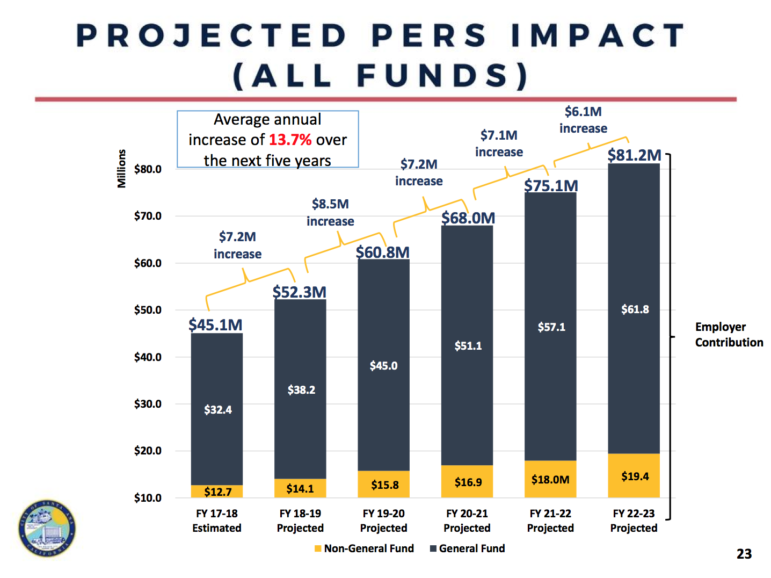 “We’re paying more out [into the pension system] than people are actually paying into the system,” said Councilwoman Michele Martinez, who has been critical of the city’s financial position and voted against the police officer raise last year.

“We’re not going to be able to catch up,” she said at Monday’s meeting.

In response to the upside-down financial picture, council members expressed interest in asking Santa Ana voters to raise taxes on themselves to pay for the rising employee costs.

“We may need to look at going to a half cent sales tax or a full cent sales tax,” said Councilman Vicente Sarmiento, who has supported such an effort in the past. He was referring to placing a ballot measure before voters to raise sales taxes within the city by half of a percent or 1 percent.

The idea of asking voters to approve some type of increased city revenue was supported by a majority of the seven council members: Sarmiento, Juan Villegas, David Benavides, and Jose Solorio.

Benavides said if the city asks voters to increase revenues, it needs to first demonstrate “five other ways” it’s being creative and aggressive to bring in money. Solorio said he agreed.

Voter approval is needed for any increase in sales taxes.

Council members also expressed interest in asking voters to legalize the city’s practice of overcharging residents for trash and sewer service by millions of dollars and using the extra money for general fund services, like police.

If voters don’t authorize the overcharging, city staff say that ending the transfers could remove as much as $15 million per year from the general fund, further exacerbating the budget deficits.

Of that $15 million that goes to the general fund, “the large majority of” it cannot continue to be transferred, based on a city-commissioned analysis, said City Attorney Sonia Carvalho.

Martinez, who has railed against the fee transfers for years, said she would continue to vote against passing city budgets as long as the city is making the transfers without voter approval, as required under California’s Proposition 218.

“You cannot ask me to approve a budget, knowing that it’s not legal to continue to take these sanitation funds. You’ve got to go to the voters,” she said.

Councilman Sal Tinajero said the city should legalize marijuana manufacturing, growing, or both, as a way of raising money.

“Let’s move forward because we’re missing out,” Tinajero said. Staff estimated it could produce an extra $11 million-plus in revenue to the city.

Council members offered a variety of other general suggestions to improve city finances, like being more business-friendly, charging land developers more for “expedited services” and adding more code enforcement officers. But they’ve suggested many of these ideas numerous times in the past year, and on Monday didn’t ask what staff progress, if any, had been made on those prior requests.

Solorio, meanwhile, argued for hiring more police officers, saying vacant positions are funded in the budget and would produce savings elsewhere for the city.

The city manager, however, later cautioned that prior expansions of the city’s workforce contributed to the city’s current financial challenges.

“You saw the staff increases in the last few years. Okay. Clearly it’s not sustainable,” Godinez said in his presentation.

A potential additional hit to the city’s finances could come from a million-dollar subsidy the City Council wants to grant to car dealerships for a new freeway billboard. The subsidy would use up $1 million in sales tax revenue growth the city would receive in the next few years.

The City Council approved the subsidy in November, but staff didn’t finalize the contract after finding out the city failed to follow a state law requiring a written report detailing public benefits before approving subsidies. Last month, council members directed staff to bring the subsidy back for approval.

While Santa Ana’s general fund spending on the Police Department grew by over $20 million from 2009 to 2016, the number of officers stayed roughly the same over the years.

Santa Ana had 269 police officers on its payroll in 2009, according to state data, and 268 officers in 2016, the most recent year available.

Before the finance discussion, council members went into a closed session to talk about lawsuits, including one in which a narrow majority of the City Council has tried to undo the reinstatement of Officer Brandon Sontag.

Sontag was fired by then-Police Chief Carlos Rojas in 2016 over his involvement in an infamous pot shop raid caught on hidden camera. Sontag was criminally charged in connection with the raid, and later pled guilty to misdemeanor vandalism and petty theft.

In 2011, the city agreed to a $2.45 million settlement of a case brought by the family of a woman Sontag shot and killed after a high-speed car chase. And before that, the city paid $100,000 to settle a lawsuit after a video showed Sontag ramming his squad car into a fleeing suspect.

Sontag was ordered reinstated to the police force by a judge last year, and the city continued to pursue its lawsuit arguing the reinstatement was improper.

The only public commenter at Monday’s meeting, Jose Tapia, took note of the payouts related to Sontag and called him “a danger to our community” and “a liability to our city.”

In the last decade, Tapia said, $17 million has been paid out for cases alleging excessive force by Santa Ana police.

“As a resident, I don’t think it’s fair that we should be on the hook for these lawsuits and these payments,” Tapia said.