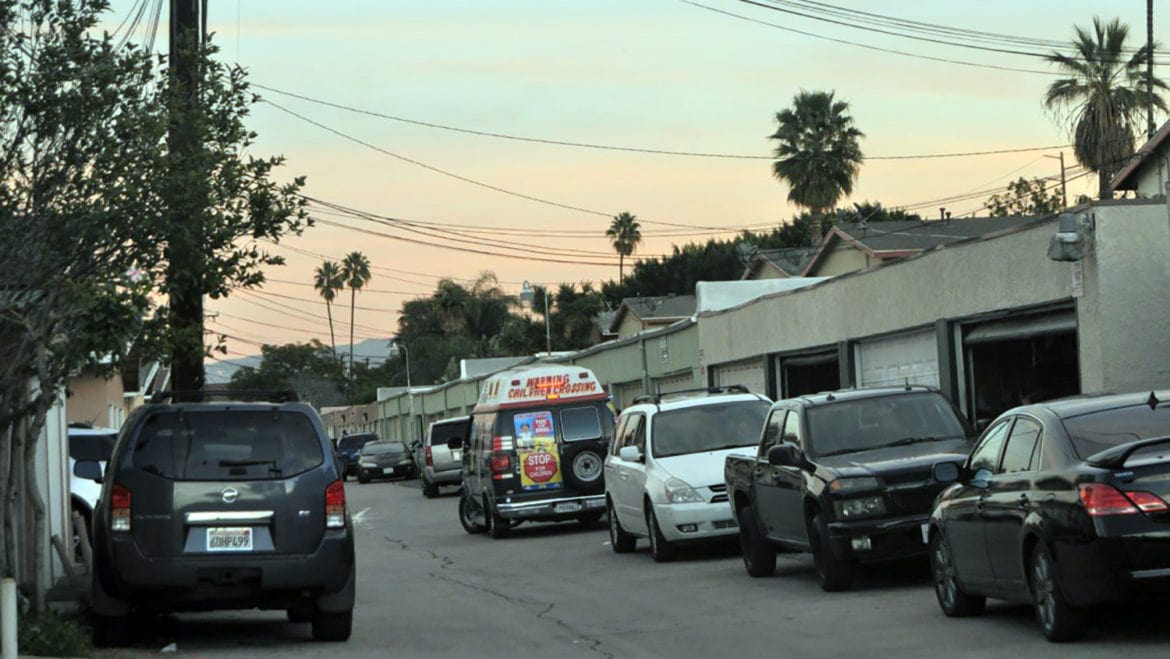 Parking along the alley is illegal, but apartment residents still park bumper-to-bumper. Residents say police rarely ticket in the alleys because of the city's difficult parking situation.

Anaheim City Council members have approved a new rules for permit parking in residential neighborhoods, after more than a year of heated public forums and meetings about parking problems.

For years the city has heard complaints from homeowners and apartment dwellers of scarce parking in their neighborhoods, generating illegal parking problems in alleys, excessive trash and fueling disputes between neighbors.

Residents have complained about long walks at night from their car to their home, rearranging their lives to make sure they find a parking spot at night, and swallowing parking citations as a cost of living in the neighborhood.

The problem is especially bad in neighborhoods with apartment complexes, many built in previous decades with much fewer parking spaces than are required today.

The new changes were approved by the City Council March 27 on a 7-0 vote. The changes are aimed at shortening the application process to convert a neighborhood to permit-only street parking, address concerns that the program favored homeowners over renters, and prevent spillover issues that push cars from permitted streets to nearby neighborhoods.

All city streets are now eligible to convert to permit-only parking.

Although permit parking zones will, by default, restrict parking to permit holders only for 24-hours a day, seven day a week, petitioners can ask for different hours for parking restrictions.

Any previously-approved parking district, however, will be grandfathered into the program as-is.

Each parking permit will cost $30 and last two years, after which the permit will need to be renewed. Each household can purchase up to 100 guest permits each calendar year for $1 each.

The program also includes new restrictions on oversized vehicles and cars marked “for sale,” to address a growing problem in certain neighborhoods with recreational vehicles blocking visibility and unlicensed used car dealers taking up curb space with dozens of cars.

An oversized vehicle is any vehicle longer than 22 feet, or a vehicle that is both wider and taller than seven feet.

“I’d like to pursue an area where folks can park their RVs if they are in need,” Moreno said. “I’d rather they be living in an RV than in a park.”

City staff noted that, because most cities in Orange County have restrictions on oversized vehicles, Anaheim has become a magnet for RV parking.

Councilwoman Kris Murray showed an image, sent to her by a constituent, of a neighborhood with at least a dozen RVs parked one after another.

Moreno also raised concerns about charging residents for guest permits, suggesting that the first 50 permits per household be free.

“It sounds like nothing, but ultimately it starts to add up, in terms of how social you can be with your friends,” said Moreno. “We’re basically privatizing our streets. That doesn’t feel right.”

The new rules were well-received by the Apartment Association of Orange County, which approached the city more than a year ago with concerns that the permit parking program disadvantaged apartment renters.

The new program requires apartment owners to prove they are enforcing parking rules on their property and maximizing parking space before they can qualify for a permit. It also requires homeowners to show they are using all their driveway and garage space.

“I do this a lot, and I do this with a lot of cities, but nowhere have we had a better experience,” Penrose said.

The changes also include:

Read all the changes here.

Correction: A previous version of this story stated the new program would limit parking 24 hours a day, 7 days a week. While that is the default for most parking districts, exceptions will be made, according to city spokesman Mike Lyster.