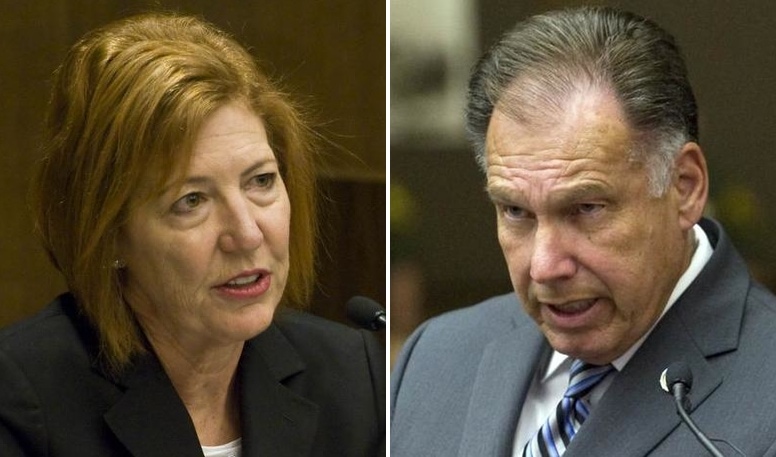 The American Civil Liberties Union of Southern California (ACLU) Wednesday sued Orange County’s top two law enforcement agencies over their use of jailhouse informants, a scandal that has upended at least six criminal cases and led to ongoing investigations by the California Attorney General and U.S. Department of Justice.

The Superior Court lawsuit says District Attorney Tony Rackauckas and Sheriff Sandra Hutchens have and continue to use illegal jailhouse informants in violation of the constitutional rights of criminal defendants.

At times, informants have threatened defendants with violence to get the information they wanted, the lawsuit states, while other informants have been “paid handsomely — hundreds of thousands of dollars in some cases –” for providing information useful to prosecutors.

Both DA prosecutors and Sheriff’s deputies have lied to protect the secrecy of the informant program, the complaint says.

Despite findings by a Superior Court judge and the Fourth District Court of Appeals affirming systemic abuses, the DA and Sheriff continue to deny the existence of any informant program, and “have made clear that they do not intend to put a halt to these abuses,” the complaint states.

“The defendants’ efforts to deny its existence — and, when forced to confront reality, to minimize and excuse it — make it clear that this lawsuit is necessary to restore integrity to Orange County’s criminal justice system,” said Jacob Kreilkamp, a partner with Munger, Tolles & Olson LLP and one of the attorneys supporting the lawsuit, in a news release.

The Sheriff’s Department responded to the lawsuit on Twitter Wednesday afternoon.

“The Orange County Sheriff’s Department has cooperated fully with the CA Attorney General and Department of Justice investigations into the use of informants in the OC Jail. Regarding the lawsuit filed today by the ACLU, @OCSD does not comment on pending litigation,” the department tweeted from its official account.

In an official statement, the District Attorney did not address the specific allegations of the case or discuss the jailhouse informant program.

“We all know the ACLU is against most things the Orange County District Attorney stands for,” the statement reads.

It cites U.S. Supreme Court cases that have “consistently upheld” the use of informants by law enforcement generally.

“Therefore the Orange County District Attorney’s Office will continue to lawfully use all evidence lawfully developed by local law enforcement and continue on our Mission,” the statement reads.

A judge has not yet been assigned to the case.

The lawsuit was filed on behalf of a citizen group that monitors court proceedings, called People for the Ethical Operation of Prosecutors and Law Enforcement (PEOPLE).

The group’s leaders include Bethany Webb, whose sister Laura Webb Elody was killed and mother Hattie Stretz seriously injured by mass murderer Scott Dekraai in 2011 at a shooting at a Seal Beach beauty salon. Bethany Webb has been an outspoken critic of how Rackauckas’ office handled the Dekraai case.

The other two plaintiffs are Theresa Smith, whose son was killed by Anaheim Police in 2009, and Tina Jackson, who runs a program supporting prisoners and their families.

Using an informant to gather information and bolster criminal cases is not illegal, but it’s a violation of a person’s constitutional right to legal counsel if the target of that informant already is charged and represented by an attorney.

Revelations about the use of informants emerged during the prosecution of Dekraai, who confessed to law enforcement soon after the shooting. But his defense attorney, Assistant Public Defender Scott Sanders, later discovered Sheriff’s deputies had placed a seasoned informant in a jail cell next to Dekraai, resulting in an illegal confession.

That prompted a far broader inquiry by Sanders and other attorneys, who believe the Sheriff’s Department, with the knowledge of the District Attorney, has operated a secret informant program as far back as the 1980s.

The ACLU believes the informants scandal has resulted in dismissed charges or reduced sentences in at least 18 criminal cases, although the exact number is unknown, the complaint states. The organization hopes the lawsuit will bring more cases involving informants to light.

Thomas Goethals, the former superior court judge who presided over the Dekraai case, barred the DA’s office from the case in 2015 after determining prosecutors violated Dekraai’s due process rights. That decision later was upheld by the Fourth District Court of Appeals.

In its ruling, the appeals court described a “well-established program” where confidential informants were placed “next to targeted defendants who they knew were well-represented by counsel to obtain statements.”

Goethals has rebuked both the DA and Sheriff for “chronic obstructionism” and delays in the release of key records about informants in Dekraai and other related cases.

Last year, Goethals ruled the failures to turn over evidence meant Dekraai could not receive a fair death penalty trial, and sentenced Dekraai to life in prison instead.

Despite those court rulings, both Rackauckas and Hutchens have continued to deny the existence of a jailhouse informant program. Instead, they say the snitch scandal has been overblown by defense attorneys and gullible reporters, and argue the illegal use of informants was the work of a group of rogue Sheriff’s deputies, unbeknownst to their superiors.

A controversial Grand Jury report released last summer – which has been heavily criticized by legal experts – came to similar conclusions.

Rackauckas also accused Goethals of a personal bias, suggesting at a recent campaign event that Goethals’ actions were motivated by the fact that his son was rejected for a job at the DA’s office, according to the Orange County Register.

Referring to the appellate court ruling, Rackauckas said “Judge Goethals and the different members of the Court of Appeal; they’re socialites…do dinners in each other’s houses and such.”

Goethals has since been appointed to the Fourth District Court of Appeals by Gov. Jerry Brown.

Sanders praised the ACLU for spending time and resources pursuing the case.

“I think it’s invaluable because what we see here is an agency that’s committed to going along the same path,” Sanders said. “They won’t be stopped unless somebody stops them. They have to face multiple pressure points.”

The lawsuit comes amid a heated race for District Attorney and Sheriff. Rackauckas is running for re-election to his sixth, four-year term, while Hutchens said she won’t run again and has endorsed Undersheriff Don Barnes as her successor.

Rackauckas told Village Television in February that he would “try to find somebody, pretty soon, after the election, who would be able to take over that job,” prompting speculation by OC Weekly reporter R. Scott Moxley that Rackauckas would step down early and appoint his chief of staff, Susan Schroeder, as DA.

Schroeder told the Weekly that “the DA promises to fully serve his next term,” then added he “may consider looking for someone to replace him.”

Asked to clarify that statement, DA spokeswoman Michelle Van Der Linden said Rackauckas “has never even contemplated not serving his full term” and he would “most likely look to groom someone who would then eventually run and be elected to take over the office when his term is over.”