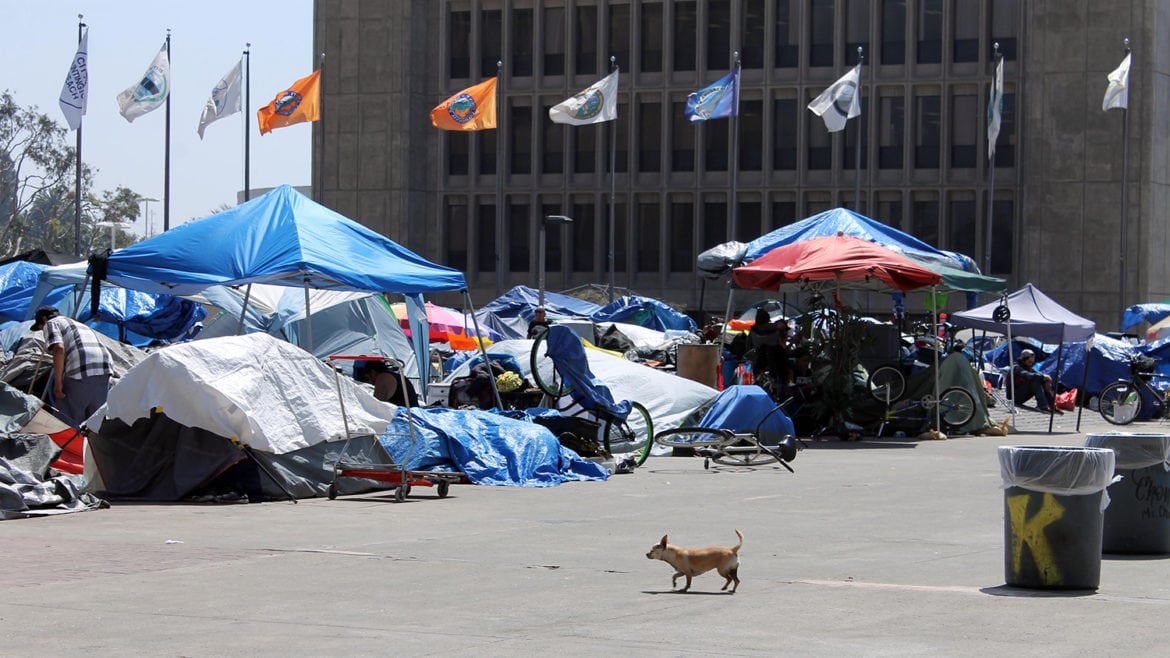 The former Plaza of Flags homeless camp in the Santa Ana Civic Center, which was cleared out in April. Photo taken March 30, 2018.

Federal court involvement in Orange County’s homelessness crisis is ramping back up, with Judge David O. Carter setting a Friday morning hearing in response to the closure of armory shelters, which pushed more than 200 homeless people into local communities where it’s illegal to camp in public.

The hearing comes after homeless people who had been staying at the county’s two National Guard armory shelters lost that option in mid-July – when the armories closed until winter – and returned to the streets. The county’s other shelters have already been at or over their reasonable capacity, according to Carter.

The judge previously told city and county officials that people staying at the armories need to be accommodated when the existing facilities closed.

“Those are people actually seeking help,” Carter said in May, referring to homeless people staying at the armories. “They don’t want to be sleeping” in people’s backyards, “and you need to accommodate them,” he told city and county officials.

But the closure came and went without additional shelter beds coming online, nor any commitment from local officials for when a similar shelter capacity would become available.

“Hundreds of people are, once again, without a place to sleep at night other than on the streets, in the parks and in other public places, where they are experiencing harassment and arrest by law enforcement,” attorneys for homeless people wrote last week in an update to their lawsuit.

Up to 242 people stayed at the two armory shelters each night in the weeks before they closed. One armory is in Santa Ana and the other is in Fullerton.

City officials in Santa Ana, which has more homeless people than any other OC city, have said the armory closings, and the earlier eviction of hundreds of homeless from the Santa Ana riverbed and Civic Center, has inundated their neighborhoods and businesses.

In their updated suit, attorneys Carol Sobel and Brooke Weitzman alleged constitutional violations and renewed their request for a court order banning the cities of Anaheim, Orange, and Costa Mesa from enforcing anti-camping laws against homeless people – at least until shelter options are available so people have a viable option to not break the camping laws.

“By virtue of their status as homeless and disabled, and the absence and insufficiency of shelter or housing in the region…[homeless people] have no way to comply with the laws [cities] have sought and continue to seek to enforce against them,” states the updated complaint.

The judge wrote he was setting the hearing “in light of the Fullerton Armory closing on the morning of July 13, 2018 and the Santa Ana Armory closing on the morning of July 15, 2018 – which forced homeless persons who are seeking shelter onto streets, parks, sidewalks, schools, residential areas, and commercial districts – and in light of the absence of sufficient available beds at shelters in Orange County.”

The parties to the case – the county government; cities of Anaheim, Orange, and Costa Mesa; and attorneys for homeless people – “should be prepared to address the following issues” at Friday’s hearing, Carter wrote:

Carter also hinted at his prior suggestions that he’s willing to let local governments out of the lawsuit through settlements if they act to provide sufficient shelter.

“The Court is prepared to present proposed settlement terms, after hearing from the parties,” he wrote.

Anaheim, Orange, and Costa Mesa have been the defendant cities in the lawsuit from the time it was filed in January, when the suit centered on the impending eviction of a large homeless camp along the Santa Ana riverbed that ran along the border of Anaheim and Orange.

At one point Santa Ana moved to add all of Orange County’s 34 cities to the suit, Orange County Catholic Worker v. County of Orange. But the city abruptly stopped serving the paperwork, and the other cities are not officially part of the lawsuit at this point.

Carter, however, has suggested he could ultimately decide whether to ban on anti-camping ordinances countywide or divide it into different regions, if the attorneys for homeless people request it.

In their lawsuit update last week, Weitzman and Sobel laid out a series of alleged constitutional violations and asked for 14 categories of court orders against the county and the three cities currently in the suit.

Among their requests are orders that would:

Sobel and Weitzman estimate more than 1,500 people would fall under the class.

Leon Page, the county’s top attorney, said the attempt at class status for homeless people is “a useful and positive development” that “will help the county reach a comprehensive solution to the problem of homelessness.”

“The county has an interest in building out a system of care. And the county and the Board [of Supervisors] would very much like to do so, with the assurance that once it makes a commitment, that it won’t then be sued again and again in subsequent successive lawsuits,” he added.

“So it is in the county’s interest to not only have a class action, but in fact to have that class be as broad as possible…so that the county has some assurance that when the county builds out a system of care, it wouldn’t then be sued again.”

“The component that Judge Carter is most concerned about has to do with law enforcement, which is – if, say health workers or the police runs across someone who’s homeless, and they need help and they need a place to stay – where can they take those people? Like, that day,” said county supervisors’ Chairman Andrew Do, in an interview with Voice of OC in late June, two weeks after the most recent court meeting.

“So that’s why, when we’re talking about emergency shelters…it has to be someplace that’s accessible” to health workers and law enforcement, he said. That’s why the judge “doesn’t want anything that’s longer than a half hour commute from any of the cities in south county,” which would be “centrally located in south county,” Do said.

One of the sticking points in the shelter discussions has been who will pay for it.

City officials have looked to the county to pay most, if not all, of the costs for new shelters. And the county has been accused of rebuffing requests that it chip in for a proposed shelter, either by not responding to city officials or asserting the county has no available funds for it.

Last week, an Orange County businessman presented “an extremely viable plan” for a shelter with “life-rebuilding” assistance, said Jeanine Robbins, an Anaheim resident who advocates for homeless people, during public comments at Tuesday’s county Board of Supervisors meeting.

Asked if this was an accurate description of what Kim said, and if the county has money to contribute to new homeless shelters and service centers, county spokeswoman Molly Nichelson said via email: “We have not budgeted any monies specifically for additional shelters.”

Regarding a potential 700-bed shelter in Santa Ana, which county and city officials referenced in federal court last month, Voice of OC asked about the accuracy of claims Santa Ana requested financial assistance from the county but the county did not indicate to the city it will chip in financially. The county reportedly either did not respond to the city or indicated funding is not available.

“Negotiations with various city partners are still ongoing at this time,” Nichelson replied.

“The Board [of Supervisors] has set aside funds…I think in the neighborhood of $15 million or so for homeless services, in addition to” other categories of funds, Page said. “The resources are there.”

“The challenge, as we often find, is that the county does not have local land use authority. So we really need cities to step up” in identifying sites for additional shelter, Page said.

Friday’s hearing comes after a weeks-long lull in the official court proceedings, which had a series of court meetings in the spring but had been quiet since mid-June. However, Carter apparently continued to monitor the situation.

Page said his impression is the court is most interested in hearing from the cities that don’t seem to be as active in building a system of care for homeless people.

“I imagine that the court would use [Friday’s hearing] to encourage other cities in the county to step up their efforts to provide shelter to homeless persons,” Page said.

Do, the supervisors’ chairman, said he expected some cities will “step up and add to the capacity that we currently have.”

“That will then leave regions that are unable to meet their obligation – they will be kind of an outlier,” Do said in the late-June interview.

“And at that point they will have to face whatever the legal recourse that they may face in court,” he added. “Everyone is trying to get…something done so that they don’t get kind of tagged with this perception by the court, that they are not working in earnest toward a solution.”