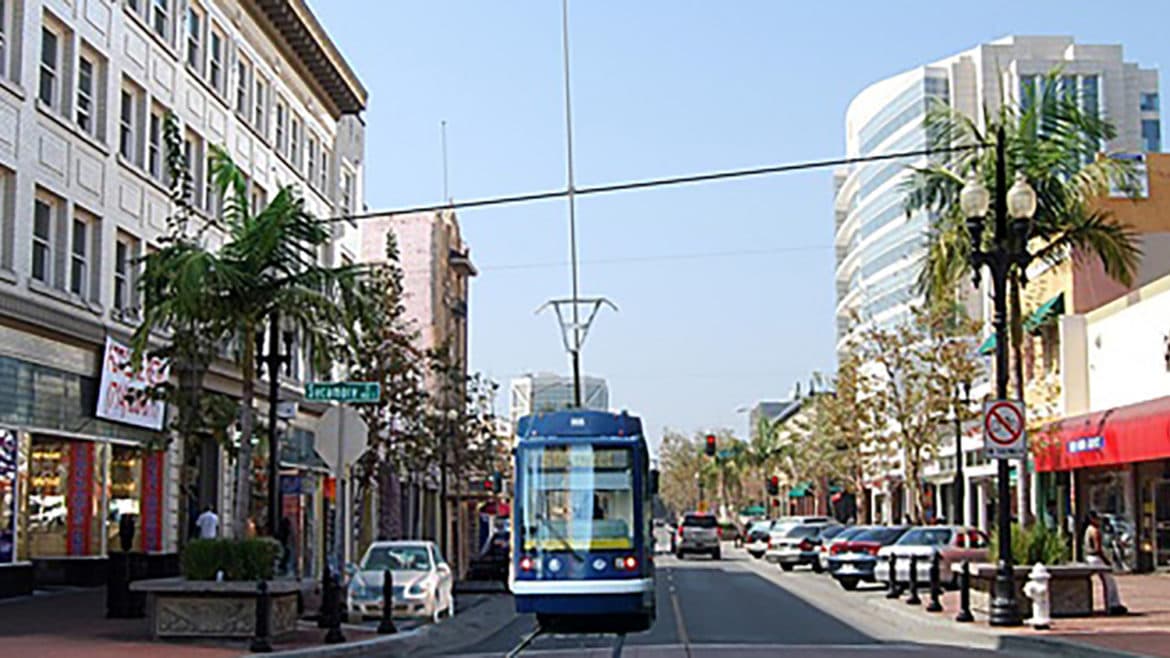 An artist's rendering of a streetcar in downtown Santa Ana.

A Harbor Boulevard streetcar in North Orange County is dead after split opinions among four cities along the route prompted the board of the Orange County Transportation Authority (OCTA) to drop the idea.

A streetcar was one of the top-rated options in a study conducted by planning consultants for OCTA for new transportation investment along an eight-mile stretch of Harbor Boulevard running through Anaheim, Garden Grove, Fullerton and Santa Ana.

While Santa Ana and Garden Grove – the site of a separate, existing streetcar project – support a streetcar along Harbor, the majority of officials in Anaheim and Fullerton do not.

Construction for the Santa Ana and Garden Grove streetcar, however, is expected to move forward, although at a substantially higher cost and later schedule than originally planned.

Costs for the Santa Ana to Garden Grove streetcar, known as the OC Streetcar, will be 36 percent higher than the agency’s original estimate, an additional $108.41 million in costs that will be paid out of county transportation tax funds set aside for improving transit connections to Metrolink train stations.

The agency is banking on $217 million in federal grants from the Federal Transportation Agency, which prior to the cost increases would have funded 72 percent of the project.

Original estimates put the cost of the OC Streetcar at just under $300 million. It’s now estimated to cost $407.7 million, $165.5 million of which will come from local transportation tax funds, $217 million from federal sources and $25.5 million from state sources.

According to staff, an 11-month delay in securing a federal funding agreement has increased costs throughout the project, primarily construction costs. After the new cost increases, federal funds will make up 52 percent of funding, while local tax proceeds will fund 41 percent of the project.

OCTA officials expected a finalized funding agreement with the Federal Transit Administration at the end of 2017.

According to Governing Magazine, some transit advocates have accused President Donald Trump’s Administration of purposefully stalling the award of $1.8 billion in federal transportation grant monies, including $149 million in federal New Starts program dollars for the OC Streetcar.

The Federal Transit Administration says the money hasn’t been awarded yet because the projects aren’t ready.

“Any characterization of FTA delaying the funding of grants is inaccurate as the majority have not met eligibility requirements,” an FTA spokesman told the magazine.

In order to be able to receive federal reimbursement for construction costs, OCTA can’t spend money on construction until after the federal funding agreement is executed. With the agreement delayed, the agency extended a number of other deadlines for bids.

OCTA spokesman Joel Zlotnik said the tax funds that will pay for the cost increase were previously untouched and unallocated monies.

The Board is expected to vote later this month to award a contract for construction of the Santa Ana to Garden Grove streetcar. Staff is recommending the contract be awarded to Walsh Construction, the second-lowest bidder, because the company that submitted the lowest bid, construction giant AECOM, did not meet a requirement for federal contractors.

The Harbor Streetcar was part of a larger study conducted by OCTA to determine what investments it should make along the street, one of the busiest transit corridors in the county.

The city of Anaheim once proposed a streetcar that would have largely served the Anaheim Resort, a district that contains the Disneyland Resort, Anaheim Convention Center, hotels and other attractions.

The city’s mayor, Tom Tait, was vehemently opposed to the project but it received the support of the majority of his colleagues on the city council at the time.

OCTA stopped all work on the Anaheim Streetcar in June 2016, after discussions of the project’s costs and other impacts raised questions about whether there would ever be enough riders to pay off the expensive project.

When the makeup of the city council changed after the November 2016 election in favor of Tait, the city council passed a resolution announcing its opposition to any streetcar along Harbor Boulevard, citing the cost of the project and favoring improvements in bus transit.

The Harbor Streetcar alternative would cost an estimated $690 million while a bus alternative called bus rapid transit, rated one point below the streetcar, would cost $230 million to build.

Tait has also opposed OCTA conducting any kind of study that includes discussion of a streetcar on Harbor, calling it a waste of time and money given the Anaheim council’s stated opposition.

“I appreciate not going forward with a streetcar because of issues like costs and limited right-of-way, on such a major corridor that goes through our city,” Tait said at a June 14 meeting. “To be clear on [Anaheim’s] resolution – we don’t rule out other future transit options aside from enhanced bus [services]…as technology improves, there’s going to be options for modes of transit that will be less costly and more flexible.”

Bus rapid transit is a faster bus service where the bus travels in its own dedicated lane. Because of opposition to removing a lane of traffic from Harbor, the agency will instead enhance existing bus service along the corridor.

Those improvements might include collecting fares before passengers board buses to speed up the boarding process, all-door boarding, giving buses priority at traffic intersections and increase frequency of bus service.

Santa Ana Mayor Miguel Pulido said transit projects like the streetcar are “incremental” improvements that enable other developments to occur, pointing to the possible development of Willowick Golf Course, which sits along the planned route for the Santa Ana to Garden Grove streetcar.

He also pointed to two other proposed developments along the streetcar route: county plans to remake a complex of government buildings in downtown Santa Ana, and plans by local developer Mike Harrah for a 37-story skyscraper that was first pitched in 1999 but has remained an undeveloped, fenced-off mound of dirt.

“The streetcar is a big part of what can happen there,” Pulido said. “I see this project as very forward thinking, it’s going to innovate with future technology…and other boards will decide what to do next.”

Supervisor Shawn Nelson expressed frustration with changing positions on the Harbor Streetcar from the city of Anaheim, referencing Tait’s opposition to studying a streetcar on Harbor.

“It’s awful convenient sometimes, because there’s an election or a city manager changes, to pretend a lot of people didn’t spend a lot of time and money [on a study],” said Nelson. “That’s what studies are for: to get information.”

Without naming Tait, he said future board members who oppose a project should withhold their judgment on projects until after a study is completed.

“People need to calm down sometimes. Just because something isn’t going your way doesn’t mean the whole thing needs to be blown up. It all worked out,” he said.