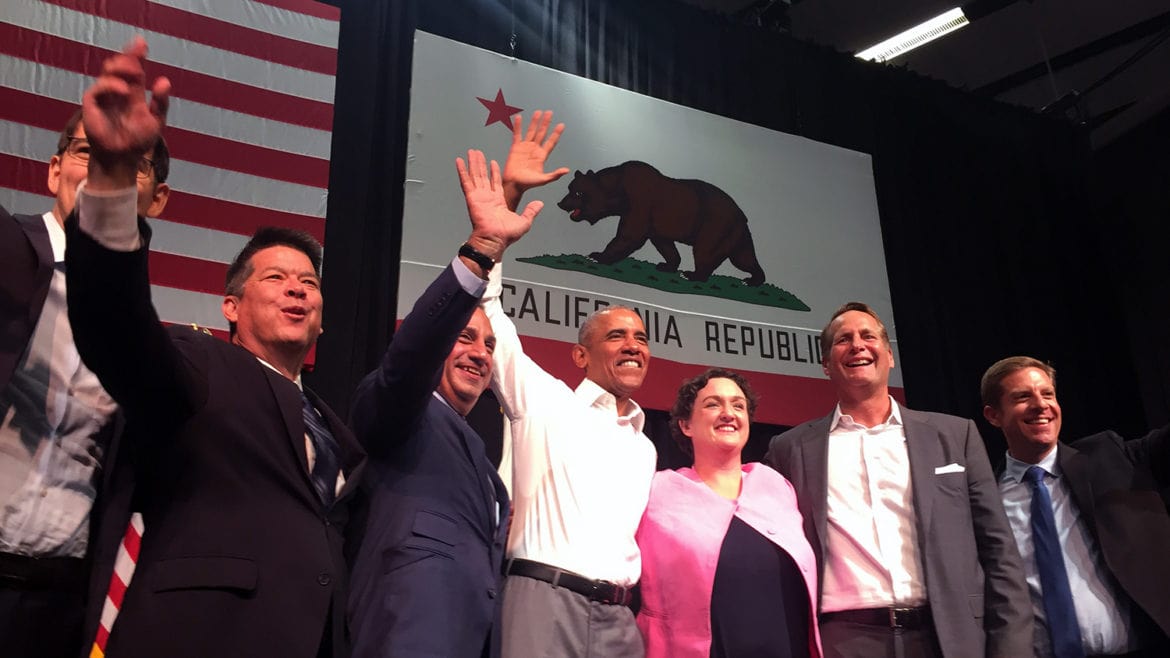 Publisher’s Note: Voice of OC election news coverage is now being featured as part of a partnership with the New York Times, offering national and local readers a deeper understanding of Orange County and the four contested congressional races here that have major implications for the balance of power in Washington, D.C. Stay connected with us for continued polls, stories and events.

Former President Barack Obama waded into the once Republican stronghold of Orange County Saturday, throwing his political weight behind first-time Democratic candidates who say they can flip four Republican-held House of Representative districts where voters sided with Hillary Clinton in the 2016 presidential election.

“I think the goal was sending a signal to people across Orange County that all the way to November 6 that the eyes of the nation are on Orange County,” said Katie Porter, a consumer attorney running against Republican incumbent Rep. Mimi Walters in the south-central OC 45th congressional district.

Following a fiery speech in Illinois Friday, where Obama broke with tradition and criticized President Donald J. Trump by name, saying he fueled “politics of fear and resentment,” the former president told an invitation-only crowd of 900 Democratic activists who gathered at a ballroom Saturday in the Anaheim Convention Center, the antidote to their concerns about Trump is to get involved.

“When there’s a vacuum in our democracy, when we aren’t participating, paying attention, if we don’t step up — other voices fill the void,” said Obama. “The good news is, for the next two months, we have a chance to restore some sanity in our politics.”

Orange County is a crucial battleground for Democrats in their effort to flip at least 24 Republican-held seats in the 435-seat House of Representatives.

Orange County has long been a Republican stronghold, but that advantage has been eroding with demographic changes in recent years. Republicans now make up 35 percent of registered voters, followed by Democrats with 33 percent and no party preference voters at 26 percent, according to latest figures from the county Registrar of Voters. Eight years ago, Republicans led Democrats 43 percent to 32 percent.

The Cook Political Report, a nonpartisan newsletter run by a team of election experts, currently rates the 39th, 45th and 48th congressional districts as toss-ups, with the 49th district as likely to lean Democratic.

Fred Smoller, a political science professor at Chapman University, said Obama’s visit is a shot in the arm for Democrats and could be a “tipping point in some very tight races” in Orange County.

But Republicans, too, say the former president’s visit will motivate their voters to fight the threat of a Democrat-run House.

“I want to thank the former President for coming to the OC today to fire up the GOP base,” Republican strategist Dave Gilliard of the political consulting firm Gilliard and Blanning tweeted after Obama’s remarks.

Democrats are hoping to use discontent with Trump to not only mobilize liberals, but also reach out to unaffiliated or disaffected Republican voters.

“By the way, we’re reaching out to not just true blue, die hard Democrats — I want to talk to independents,” said Obama.

“I want to reach out to some Republicans…who say to themselves, ‘I don’t recognize what’s going on in Washington right now, that’s not what I believe, that’s not who I believe we are as a people and country,’” Obama said.

Ahead of Obama’s visit, Walters’ campaign painted a different picture, writing in an email to supporters that Obama is backing “far-left liberals in the mold of (Senators) Elizabeth Warren, Bernie Sanders and (New York Congressional candidate) Alexandria Ocasio-Cortez.”

“These candidates are too extreme for Orange County and we cannot let them win in November,” the email states. “Do not let his visit distract us from our goal. While he and the Democrats talk to themselves – we must talk to voters.”

In addition to Obama, Walter’s opponent Porter is endorsed by a number of congressional Democrats, including Warren of Massachusetts and California Sen. Dianne Feinstein.

Walters recently told the national GOP not to spend money on her race — often a sign a party is abandoning a race, but Walters says it’s because she can raise enough on her own, according to the Los Angeles Times.

Of the four Orange County Democratic candidates, only Gil Cisneros has not received an official endorsement from Obama, and was absent from a slate of endorsements released by Obama in August, although he was present at Obama’s speech Saturday.

Cisneros, a former Navy veteran and lottery winner who has poured millions into his own campaign, is running in the 39th district against former Republican Assemblywoman Young Kim, who is a former aide to Royce.

On Saturday, Obama appeared on stage with Cisneros and noted work he has done, as a philanthropist, with former First Lady Michelle Obama on her “Reach Higher” initiative focused on encouraging students to get a higher education.

“Me standing right next to the President shows everybody he’s behind me…and I think it erases any doubts he’s not going to support me,” Cisneros said after Obama’s speech.

Rohrabacher has drawn the most notoriety in recent months for his pro-Russia views. He won re-election handily in 2016, by nearly 17 percent. Rohrabacher, 71, has served in Congress for 30 years.

Rouda, 56, was a registered Republican for several years before running for office and donated to Ohio GOP Gov. John Kasich’s presidential campaign. The New York Times noted Rouda, who is endorsed by Obama, is not the only former Republican to register as a Democrat and run for Congress this year.

In the 49th district, which is mostly within San Diego County, but includes a portion of south Orange County, Obama has endorsed Mike Levin, an environmental attorney who faces Republican Diane Harkey, a member of the state Board of Equalization and former state assemblywoman.

Presidential approval ratings are a strong indicator of how a party will fare in midterm congressional elections, and Democrats are hoping discontent with the current president will deliver them a majority in the House.

Trump’s most recent approval ratings was 41 percent, according to Real Clear Politics, which averages results from several polls nationwide.

A February 2018 poll conducted by Gallup found 63 percent of Americans approve of how Obama handled his presidency. When he left office in January 2017, his approval rating was 59 percent, according to Gallup.

Obama last visited Orange County in 2014, to deliver the commencement address at a graduation ceremony for the University of California, Irvine.

Orange County also is home to Laguna Niguel attorney and dentist Orly Taitz, who is known for filing a federal lawsuit to prevent Obama from taking office in 2008 based on the false argument that he was born in Kenya, not Hawaii as his official birth certificate shows.

District Court Judge David O. Carter – who is now presiding over a federal lawsuit about homelessness in Orange County – ruled against Taitz in a scathing 2009 ruling.