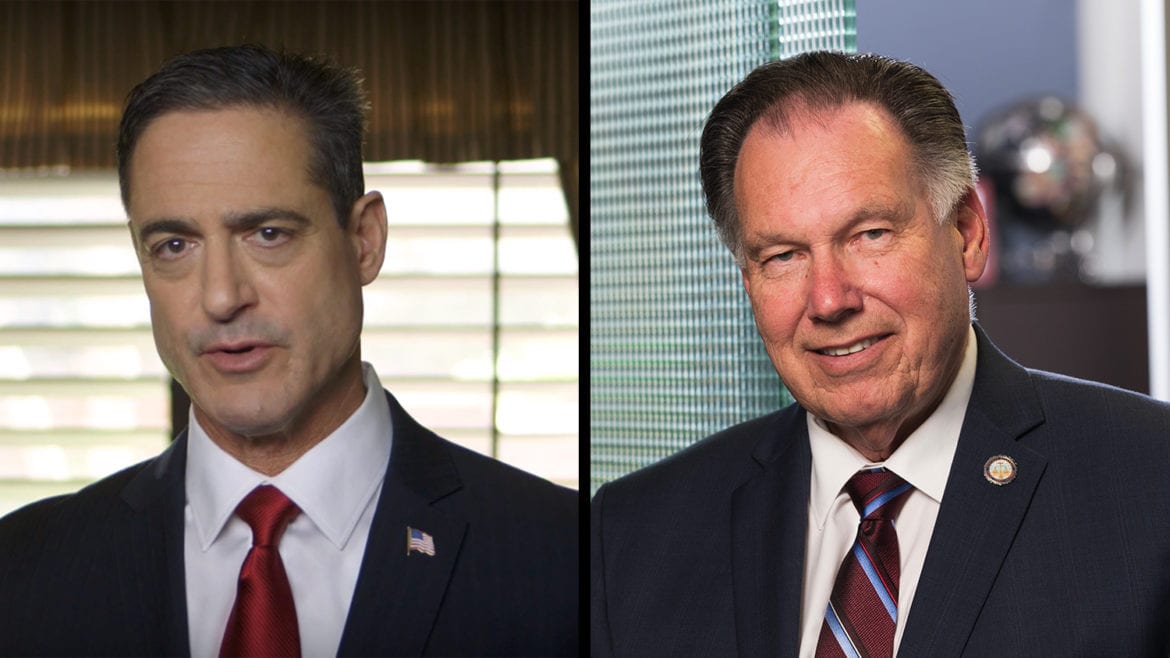 The ongoing election count, as of 1:30 a.m. Wednesday, showed Supervisor Todd Spitzer with a 5.7 percent percentage-point lead over incumbent Tony Rackauckas in the closely-watched race for Orange County District Attorney.

Almost all of the Election Day votes on electronic voting machines have been counted, though there remain an unknown number of mail-in and provisional ballots left to count.

Editor’s Note: This article was updated with new counts on election night. The final update to the article was at 1:50 a.m. See an archive below of each Voice of OC update.

The full set of ballots in the race likely will not be counted until Friday, the last day mail-in ballots can arrive at the county elections office and still be counted.

In the June primary, 42 percent of all ballots in Orange County were not counted at of the end of election night. Many mail-in ballots did not arrive at the county elections office until the Friday deadline after Election Day.

The DA face-off, years in the making, pitted Rackauckas against his former heir apparent. The two had a very public falling-out in 2010 and have feuded ever since.

Spitzer spent more than twice as much campaign money as Rackauckas: $2.2 million to Rackauckas’ $984,000.

Whoever wins will lead the county prosecutor’s office, which has more than 850 employees and handles more than 60,000 criminal cases each year. The office has about 260 prosecutors and 120 investigators.

Both candidates have been elected officials in OC for decades, and their reputations are well-established.

Rackauckas was first elected DA in 1998, and over the last several years his office has faced growing accusations of cronyism and misconduct, especially as a number of criminal prosecutions were derailed by illegal misuse of jailhouse informants, known as the “jailhouse snitch scandal.”

A unanimous appeals court ruling found DA prosecutors systematically violated the constitutional rights of defendants through an illegal informants network, and failed to turn over evidence that was favorable to the defense, as required by law.

Illegal use of informants in Orange County resulted in reduced or thrown-out charges in at least seven criminal cases– including one where a gang member facing two murder charges walked free – and potentially affected a dozen more cases.

In the prosecution of mass murderer Scott Evans Dekraai, a judge barred the entire DA’s office was from prosecuting the case and later threw out the death penalty – a decision upheld on appeal.

Law enforcement actions in the OC informants scandal are under investigation by both the state Attorney General and the U.S. Department of Justice.

Rackauckas has pushed back at criticism, pointing to a controversial Orange County Grand Jury report that dismissed the allegations of systemic informant abuse as a “myth” perpetuated by the media and the public defender’s office.

Rackauckas and his chief of staff, Susan Kang Schroeder, are under state investigation for allegedly accepting illegal undisclosed gifts of private jet travel from billionaire Henry Nicholas, according to an Oct. 29 letter from the state’s Fair Political Practices Commission. Nicholas was arrested in Las Vegas in August on suspicion of drug trafficking after police found heroin, meth, cocaine, and ecstasy in his hotel suite.

Rackauckas and Schroeder’s lawyer has said they did travel on Nicholas’ plane, but that the gift limit does not apply because of an exemption in state law for travel to speeches regarding legislative or governmental matters.

Spitzer previously worked for Nicholas, though the two had a falling out years ago.

One of Spitzer’s defining moments in office was when he handcuffed a Christian preacher at a Wahoo’s Fish Taco restaurant in 2015 for allegedly staring at Spitzer and a nearby table knife.

A sheriff’s deputy who responded to the incident said the knife on the table was a butter knife. A Wahoo’s employee told the deputy Spitzer decided to handcuff the preacher because he kept looking at Spitzer.

Spitzer disputed the description of the knife, saying it was a steak knife and that his actions were necessary to protect himself and others.

When news of the incident became public, Spitzer tried to send out a county-funded statement claiming he would have been justified to use deadly force against the preacher because table knives were nearby.

“Police officers are trained not to allow anyone either armed with a knife or ready access to a knife to come within 10 feet,” Spitzer wrote in the statement he wanted to send out. “Use of deadly force is justified under those circumstances.”

His proposed statement was titled, “I WILL NEVER TURN MY BACK ON THE PUBLIC OR ITS SAFETY.”

The county’s chief spokeswoman at the time, Jean Pasco, urged Spitzer not to send it out and warned it could expose the county to legal liability, and Spitzer did not end up send it out.

Spitzer and his fellow supervisors fought the public release of the statement and emails, but Voice of OC sued under the state’s Public Records Act and after a year-plus court battle, a judge ordered the county to disclose the records. The supervisors spent over $120,000 in county taxpayer money trying to block the records’ release.

In the DA’s race this year, Spitzer spent thousands of dollars on mailers and campaign ads focusing on the informant scandal and other allegations against Rackauckas, hoping to convince voters he would lead an honest and accountable prosecutor’s office.

Rackauckas, in turn, invested in ads alleging Spitzer is “unstable,” “unhinged,” and asking people if they “have experience with him demanding campaign donations in exchange for official actions.”

Rackauckas’ ads leveled a specific claim about Spitzer’s mental health: that he failed multiple police psychiatric exams – an apparent reference to allegations about Spitzer’s time as a reserve officer in the 1990s.

Spitzer said the psych exam clams are simply not true, and that he “never” was told he failed such an exam. What’s more, Spitzer said, he has been issued a concealed weapon permit and was brought back to the DA’s office in 2008 by Rackauckas himself.

One of Spitzer’s defining features is his ability to get his name and face onto TV news, which the other supervisors have taken note of.

When high-profile controversies erupted this spring over proposed homeless shelters in Costa Mesa and Laguna Niguel, Spitzer went to their City Council meetings – which are outside his district – to warn residents of the dangers of homeless people.

And sex offenders would not have been allowed at the proposed shelters, according to county officials.

“We would always warn people, when they came to the county [headquarters], to be careful not to be between Supervisor Spitzer and a TV camera, because you were guaranteed to be run over,” said state Sen. John Moorlach (R-Costa Mesa), who served with Spitzer on the county Board of Supervisors, in a March podcast about Spitzer’s appearance at the Costa Mesa meeting:

Moorlach laughed, adding: “So I would maybe also think twice this June when you…cast a vote for District Attorney.”

Supervisor Lisa Bartlett, who represents Laguna Niguel and other south county cities, said Spitzer engaged in “fear mongering” when he went to the Laguna Niguel meeting in her district.

The winner on Tuesday has a four-year term leading the DA’s office.

[8:20 p.m. Election Day, Nov. 6] The first reported election count showed Spitzer ahead of Rackauckas by about 5 percentage points. The count was reported at 8:05 p.m.