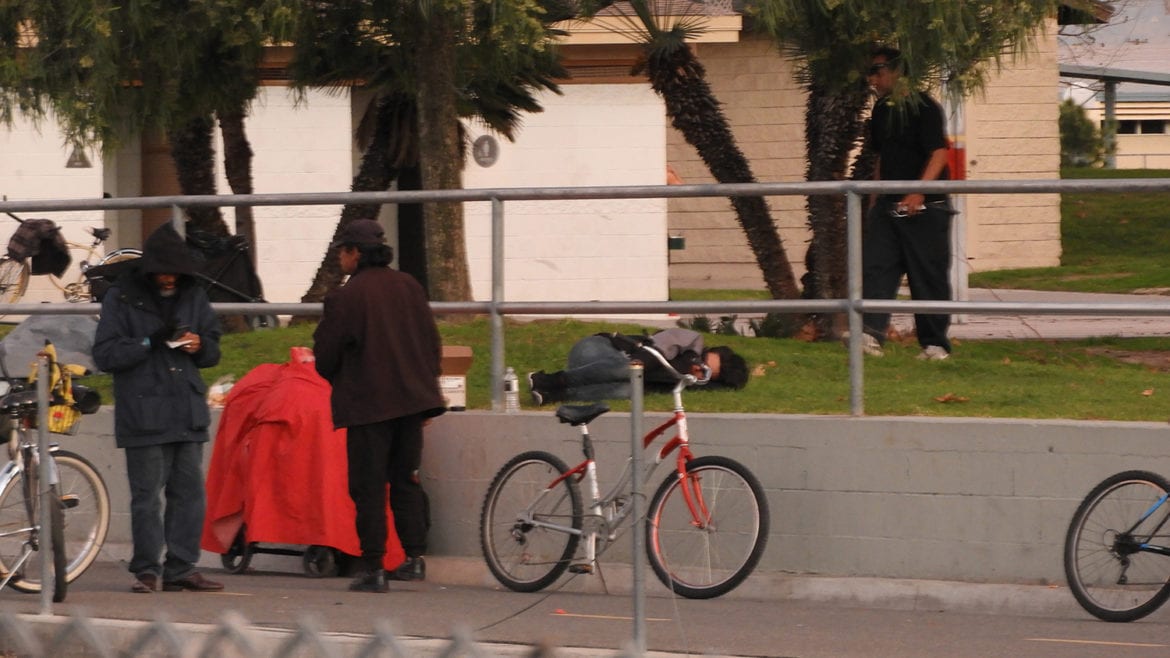 Homeless people hang out on the edge of Anaheim's Schweitzer park near a drainage canal during the day and find places to hide and sleep at night. Jan. 22, 2018.

The County, along with a handful of organizations and numerous volunteers, today begins counting the number of homeless people in each city as part of a requirement for federal funding to help combat homelessness.

“We’re actually doing the coverage of the entire county and that includes unincorporated areas,” said County spokeswoman Molly Nichelson. “We will be engaging with people on the street to chat with them … we have about 30 questions that people are going to be asked and logged on a mobile device.”

This year, those living in shelters will also be counted, Nichelson said, adding the shelter population was counted Tuesday. The counts are conducted every two years.

The count comes against the backdrop of a federal lawsuit over the Santa Ana Riverbed homeless camp evictions in January 2018. Attorneys for the homeless people, Brooke Weitzman and Carol Sobel, argued the move “criminalized” homelessness because people were pushed to city streets where they were ticketed for camping and loitering. Weitzman and Sobel argued since there weren’t enough shelter beds available at the time, the anti-camping and loitering ordinances should be suspended.

North and central county cities have been scrambling to build hundreds of shelter beds for the homeless since federal appeals court ruling. Santa Ana opened an emergency shelter in November and Anaheim opened one in December. Anaheim and Santa Ana also have plans to build more shelter beds and Placentia, Tustin and Buena Park are also trying to build shelters.

Nichelson said counting teams will be deployed to each city throughout the county, with someone driving around to locate homeless people and coordinate with other team members. From there, they will talk to the person and ask them a list of questions and log the answers, along with the location, onto a mobile device. All the information will be relayed to the central hub in Santa Ana and displayed on a digital map.

Noble said some people may be living in drainage canals and tunnels along the Santa Ana Riverbed, near freeways and railroads.

“Everybody is kind of underground because the cops keep harassing them and putting them in jail for every little thing,” Noble said. “Ever since they started doing that, telling everybody they’re going to jail if they didn’t go to shelter, people have been hiding.”