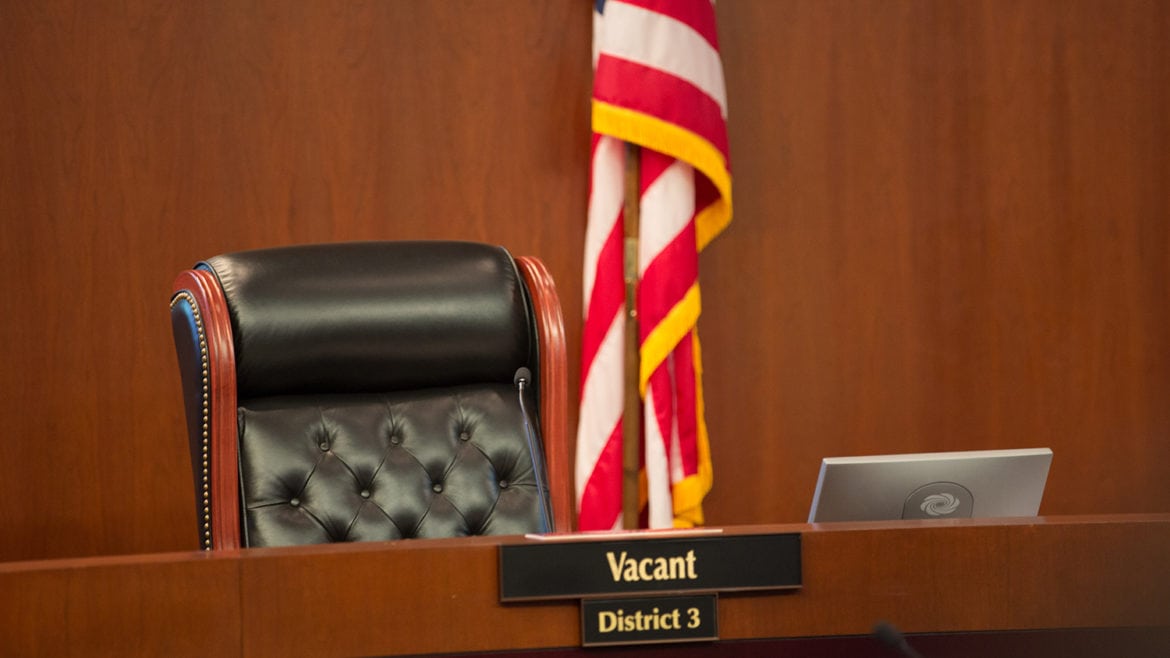 Since the Blue Wave crashed into Orange County last November, there’s been a vacant seat on the dais of the county board of supervisors.

Next Tuesday, residents living in the Third District, which includes the cities of Anaheim, Tustin, Irvine and Orange as well as unincorporated communities like North Tustin and the canyons, head to the polls to fill the seat in a special election.

Former Supervisor Todd Spitzer vacated the remainder of his 2016, four-year term when he won election as Orange County’s District Attorney.

To date, the Orange County Board of Supervisors has largely been an all-Republican affair.

Lou Correa, now a Congressman representing the 46th Congressional District, had a short stint on the board from 2004 to 2006 as the lone Democrat in a long while. Democrat Doug Chaffee, who just won election in the Fourth District this past November, is the first Democrat to get elected to the board since Correa.

Democrat Loretta Sanchez, who now lives in Orange and represented the neighboring 46th Congressional District in Santa Ana for two decades, stands out as likely the most recognized name in the pack running to replace Spitzer. Sanchez is also the only Democrat running.

Irvine’s Republican Mayor Don Wagner, who won the OC GOP endorsement last month, also comes into the race with solid name ID, having run in the district nearly a half-dozen times between multiple state assembly and senate runs along with two runs as Irvine Mayor.

Yet Wagner’s chances also are impacted by the entry of two capable and well-known Republican names such as former Villa Park Councilwoman Deb Pauly and former Anaheim Councilwoman Kris Murray.

In all, seven candidates are running to represent voters in the third district.

There are already 33,929 ballots returned in the election with Republican turnout, 15,173 ballots returned, slightly ahead of Democratic turnout at 11,088 ballots and 6,584 independent ballots turned in.

As one of five chief elected officials overseeing the County of Orange, the county supervisor job is considered the jewel of local government in that it’s local, offers leadership in regional organizations and features a six-figure salary plus generous health and pension benefits, retirement plans and even a healthy, Mercedes-range car allowance.

As a supervisor, you are one of five as opposed to one of 435 in the U.S. House. While a state legislator can rarely delve into the workings of state government, a county supervisor can walk right into the engine room of government and directly impact policy.

It’s a uniquely powerful position in that it oversees procurement for a $6 billion annual public budget spent across the county, covering everything from John Wayne Airport to the landfills to the jails to regional recreational areas like Dana Point Harbor.

Supervisors also have extensive land use authority in the canyons and unincorporated areas – with the ability to introduce changes to specific plans, even influence enforcement of regulations.

That kind of land use power has triggered lawsuits from Third District residents in the past over violations of the local development standards like the Foothill Trabuco Specific Plan and others.

Throughout the entire supervisors’ special election run of events, in our podcast interviews with Sanchez and Wagner, and the candidate editorials submitted to our Opinion section (Sanchez, Murray, Bales, Daigle), it is clear that the number one issue the public is pressing candidates about is the homelessness crisis and what they are prepared to do as county elected officials to help solve it.

There is a consensus among nearly all challengers that the current board of supervisors has been slow to react to the crisis and done a subpar of managing taxpayer resources to address it.

“The board of supervisors failed us and the city officials failed us,” said Sanchez at a recent candidates forum sponsored by the Foothill Communities Association and the League of Women Voters.

Wagner, who also has been critical of supervisors for failing to lead on shelters regionally, also has taken heat as Irvine’s mayor for failing to have his South County colleagues come up with their own solutions in terms of shelters.

Indeed, so far, Wagner has largely run on keeping shelters out.

Wagner said at a recent forum and in the On OC podcast that homelessness “requires lots of different solutions, not one size fits all.”

Murray, who worked to clear homeless encampments along the Santa Ana River in Anaheim near Angels stadium as a councilwoman in recent years, has also been critical of the lack of progress from county officials.

She touts herself as the only person with “boots on the ground” experience on engaging homelessness response.

Pauly, a former Villa Park city councilwoman, also criticizes the current board of supervisors and other agencies like the state for failing to use existing resources to combat the crisis.

Probably the biggest issue that impacts public policy in Orange County – but rarely gets discussed much less addressed – is property tax equity.

For every property tax dollar that Orange County residents send to Sacramento, only about six cents come back – among the lowest percentage in the state.

Sanchez argues her experience over two decades in Congress make her uniquely suited to go after tax equity in Sacramento.

“Nobody up here knows how to get money like I do,” said Sanchez at a recent candidate’s forum.

Wagner – who served several terms as a state assemblyman representing much of the same areas in the Third District – called out Sanchez saying it was “absurd that we can just go to Sacramento” and get other counties who benefit from the imbalance to help Orange County.

Sanchez hit right back, noting, “They don’t like you.”