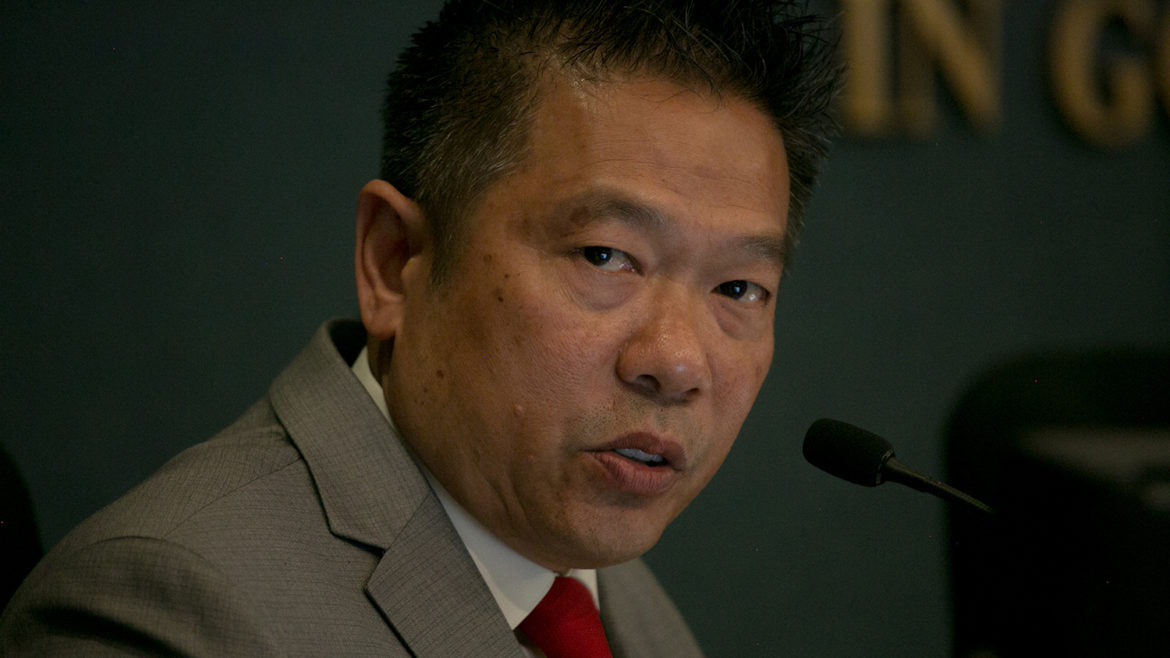 Westminster has a chance to “make peace with the past,” according to first-time City Councilman Tai Do, who in the first few months of his term has become known for his clashes with fellow council members over ideas about ethics, power, and accountability in a city still reeling from years of corruption allegations leveled by former city employees.

A set of policies introduced by Do in February, which center around informing the public about a code of conduct for council members and city staff to comply with state ethics laws, have exposed tensions between the newcomer and council members Kimberly Ho and Charlie Nguyen, as well as Mayor Tri Ta, who have argued publicly that Do’s proposed measures aren’t necessary because council members are already following those laws.

Those tensions led to frequent, sometimes personal, heated exchanges on the dais between Do, a Long Beach Police Officer of 23 years, and his peers over the past couple of months.

“When I ran for City Council last year, the number one issue I heard from residents that I met during the campaign was that they viewed the council and city as corrupt,” said Do over the phone Tuesday.

“So for the majority of the Council to resist, it begs the question whether they are (either) truly tone deaf to the voters,” he added, “or that corruption has been a normal city practice so it is acceptable and not viewed as a problem.”

Councilwoman Ho, who asked to speak via email, said meetings “have evolved into name calling and false and trivial allegations” and that she’s tried to “extend an olive branch” to Do and encourage him “to take a step back, and get to know city staff, the council, and the serious issues the city is currently facing.”

“The big issue with Tai is his personal need to play politics, and his negative view of the city and our staff,” she added. “He is just trying to use these various issues for his own political gain, rather than trying to make an honest difference.”

Mayor Ta said in an email that “many of the allegations and positions of Mr. Do are not always being presented in a fair and responsible manner.”

“They are making it more difficult to get the real business of our city done.”

Do’s policy proposals have support from at least one other member on the dais, Sergio Contreras.

“I believe (Do’s) efforts to create a culture of ethics, transparency and accountability are genuine,” said Contreras in a text message. “I am surprised by the backlash (he) faced, as this only serves to reinforce people’s worst fears.”

Do’s proposed policies — to make council member ethics training workshops open for public observation, develop a code of conduct for city staff and put that code of conduct on the city website in numerous languages, and establish a public corruption hotline for city staff and businesses to call — are still waiting on final council approval. They were supposed to be discussed at the council’s March 27 meeting but were tabled for a later meeting at Ho’s request.

Tensions rose during a Feb. 12 city council meeting when Do questioned the ethics of council members communicating directly with city staff regarding policy decisions and code enforcement.

Do drew his concerns from a 2016 legal claim filed by former police chief Kevin Baker, who in his complaint described a city where corruption ran rampant and council members at the time operated like a “gang,” pushing for police enforcement against certain businesses to punish political enemies and using city resources to enrich themselves and political allies.

Many of the council members named in Baker’s claim, including former mayor Margie Rice, aren’t on the dais anymore. Contreras at the time called the claims about him “absurd half-truths.”

The city has argued Baker’s allegations were a smear effort and that he never substantiated his claims, though he received a $500,000 settlement with the city. Baker also agreed not to discuss the allegations publicly, though Voice of OC won a lawsuit to make the claim public in 2017.

“Members of the City Council cannot go directly to the staff and order staff to do things for the Council regarding city business. Everything has to go through the City Manager. The rules were designed so we can protect city staff from hostile work environments,” said Do at the Feb. 12 meeting.

Do added that direct interactions between council members and staff could “lead to a lot of problems, a lot of corruption.”

This prompted Councilwoman Ho, through tears, to publicly threaten Do with a defamation lawsuit, though Do never named her in his remarks.

“I’d like you to learn the status quo, how things go first,” responded Ho almost immediately. “Find your way out of the gate before you make comments and before you start trying to accuse this Council … this Council works very well.”

“So I’m gonna warn you. Ok?” Ho added, at this point visibly emotional. “If you don’t watch what you say, I’m gonna send a defamation lawsuit your way.”

Ho later added in email that “Westminster has great employees, and they are going to be part of any ultimate solution. They should be thanked for their service, not attacked.”

That meeting prompted Do to draft his set of proposed measures, which he introduced Feb. 27 as what he called an attempt to “make peace with the past.” During the meeting, he read from the dais Voice of OC’s coverage of Baker’s claims to make his case for the policy proposals.

“We don’t know if (Baker’s) allegations are true or not. Regardless of your opinion on the matter, the public opinion on this haunts our city,” Do said. “We will spell out the rules of engagement so that the public has a clear understanding of how our system of government works, and what to expect from our elected officials. We can all start fresh here.”

Ta responded during the Feb. 27 meeting by saying the city already abides by the state Assembly Bill 1234, the government ethics bill that Do’s measures are based on, in that council members take an ethics training course every two years either online or in a class taught by a member of city staff.

“I always follow the highest ethical standards, and I have recused myself whenever there is even a hint of a conflict,” Ta added in his Wednesday email. “I have also attended all the state mandated ethics training, and I frequently consult with the city attorney’s office whenever there are questions.”

“And I believe all of my colleagues are doing the same.”

Nguyen in response to the proposed measures reiterated his belief that having a dialogue with city staff allows work to proceed efficiently, and at the earlier Feb. 12 meeting said separating council members from city staff is “a recommendation …  a courtesy. But it’s not a rule.”

Ho argued that Do’s proposals “lead the public to think there’s some wrongdoing with this council. You (Councilman Do) imply we are unethical and imply that we are not following the law.”

“I agree that ethics is important, and that we should adopt a policy,” Ho said in her email. “I just don’t like the way (Do) is trying to use this issue for the sole purpose of trying to make himself look better. Let’s address it, but do so in a manner that is real, transparent and represents the input of the entire council.”

Contreras said he takes Do “at his word that he is simply trying to change that perception by adopting a code of ethics, and implementing common sense reforms like term limits and contribution limits.”

“The reality is that, like it or not and fair or not, there is a perception that some Westminster politicians care more about their own selfish interests than what is good for the city,” he added.

Do’s challenges to council members don’t just span his proposed ethics policies. At the March 27 council meeting, Do requested the council hold a vote to rescind Mayor Ta’s recognition of a Vietnamese actress, Ngo Thanh Van, questioning whether the mayor even had the authority to give out the commendation without Do’s or other council members’ consultation.

City Attorney Dick Jones sided with Ta, arguing the Mayor did, in fact, have that power. Council members later approved Do’s and Contreras’ requests to have their names removed from the official recognition.

At the earlier Feb. 27 meeting, Nguyen asked Do why he was present for an organizers’ meeting earlier this year on the city’s annual Tet Parade when Nguyen, the council liaison for that meeting, was also present.

“I was there to make sure that you were there, sir,” Do answered.

Brandon Pho is a Voice of OC intern. Contact him at [email protected] or on Twitter at @photherecord.