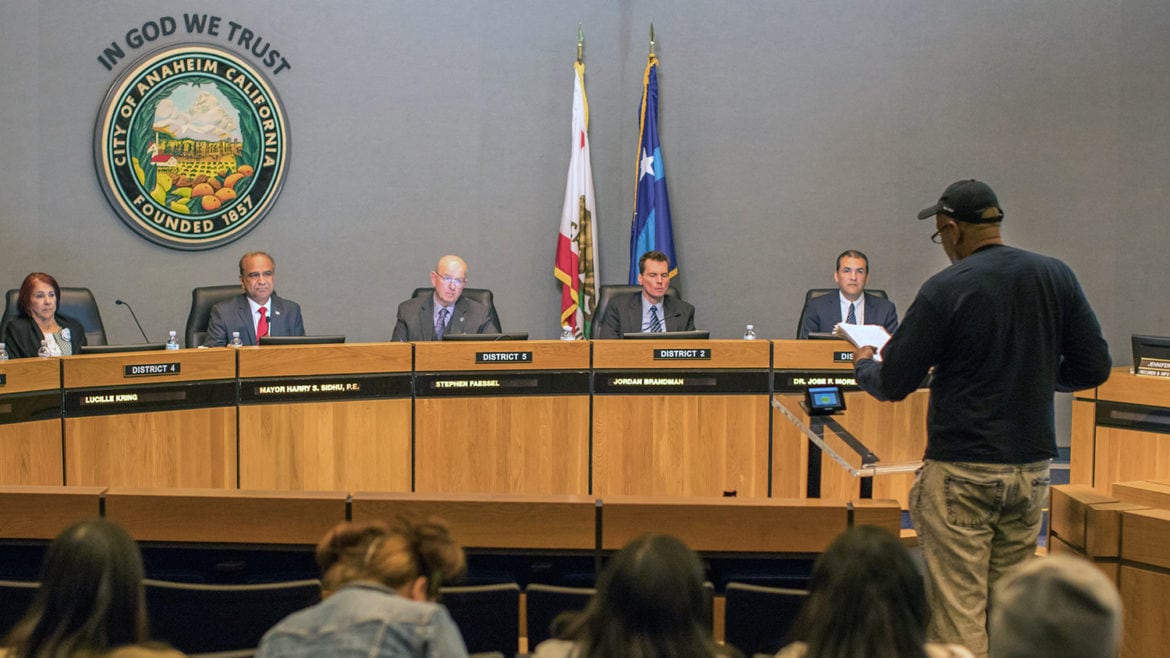 A member of the public addresses the Anaheim City Council on Feb. 12, 2019.

Anaheim Mayor Harry Sidhu has single-handedly restricted Council comments to two five-minute intervals on each agenda item after he removed from the agenda a policy proposal that would’ve cemented it to the city’s meeting procedures.

“Upon further consideration I think we are best served if we as, council members, can govern ourselves without adopting this proposal at this time as a hard and fast rule,” Sidhu said. “I’m going to suggest to my city council colleagues that we informally practice what I originally proposed in this item … starting this evening, I’ll ask all to limit the discussion on each item to two rounds of five minutes each.”

Sidhu originally tried to get the City Council to vote on the rule limiting discussion at the April 16 meeting, but he appeared to lack majority support to pass it and the Council voted to continue the procedural change to this week’s Tuesday, May 7 meeting. But Sidhu removed the proposal from the agenda before Tuesday’s meeting started.

When the item was up for discussion at the April 16 meeting, some council members expressed their hesitancy to vote for it.

During deliberations on joining the Orange County housing trust, a regional body aimed at building homes for homeless people, Councilman Jose Moreno tried to get amendments made to the way the trust’s board votes.

Moreno unsuccessfully tried to bar housing trust board members from voting on a developer’s contract if the person received campaign contributions from them.

“We saw two articles today in the media that I think are troubling to our residents about how folks who contribute to our campaigns may or may not have an undue influence,” Moreno said, referring to articles about Anaheim First published by Voice of OC and OC Weekly.

“I love the initiative (housing trust), I think it’s great … but if we’re going to participate as the biggest city that has a lot to gain from this, then we got to make sure that the contracts that are provided, the monies that are distributed are not a function of campaign contributions,” Moreno said.

Moreno motioned to push back partnering with the housing trust in an attempt to get the trust to change its bylaws before voting on the item.

There was some arguing between Kring and Moreno about the housing trust and potential lobbyists involved with it before a vote on Moreno’s unsuccessful second motion to partner with the trust, but also try to get its bylaws changed to prevent members from voting on campaign donors’ contracts.

“Mr. Mayor, can I get a clarification on your rules?,” Moreno asked. “Because I think we’re now practicing them, even though we were supposed to continue it as an actual rule.”

“So for me to have exhausted five minutes earlier was based on one vote but now we have two ensuing votes and I’m limited, per your rules, in the ability to then engage on those two votes because I’ve used up my time … how does that work, we can’t speak to them?” asked Moreno.

“If you have a question, I will give you the floor for one minute.” Sidhu responded.

Sidhu’s council speaking rules again became an issue shortly after the Council voted 6-0-1, with Moreno abstaining, to partner with the housing trust.

The two again clashed during a public hearing on the downtown and resort area transit program funded by the resort industry and state grants — which trams people to hotels, restaurants, Disneyland and other business areas.

“Councilmember Moreno that you have met with ATN (Anaheim Transportation Network) and spent two hours. … I hope you can keep it short, they have answered most of your questions before,” Sidhu said.

Sidhu’s rule came up for the last time at Tuesday’s meeting during council communications — when Councilmembers report their activities in the city and can try to get their policy ideas on future agendas.

According to Sidhu, each person on the dais had only five minutes to speak during council comments.

But Moreno — who pushed for an apartment rent increase moratorium agenda item, submitted his funding proposals for the 2019-2020 budget and recapped his activity since the last meeting — went over five minutes.

He spoke for roughly 12 minutes, including a request that he and Barnes be put on the ad hoc committee to oversee the $250 million in neighborhood spending over the next 10 years.

Sidhu ignored Moreno’s request and didn’t address it when he put Faessel and Brandman on the committee with him.

“Council member Moreno. You know, you should have respected the time. Your light was up there. You have talked for almost about 12 to 13 minutes and I will ask everybody to respect the time as I have given it earlier in the meeting,” Sidhu said.

At the April 16 meeting, several councilmembers had issues with the Sidhu’s proposed speaking limits.

Brandman said he didn’t want the City Council to be run like the U.S. House of Representatives, which has strict time limits representatives’ speaking times.

“While I understand the reasoning behind this, I don’t aspire to become the House,” Brandman said.

Barnes said she was concerned that Sidhu had been chipping away at public comments, agenda-setting requirements, board appointments and Councilmember comments.

“We learned to be able to have a really robust discussion. In the last four months we’ve just been cutting away and chipping away at being able to express ourselves,” Barnes said. “I could read here a litany of things that have been proposed by you Mr. Mayor … that continues to eat away at our integrity.”