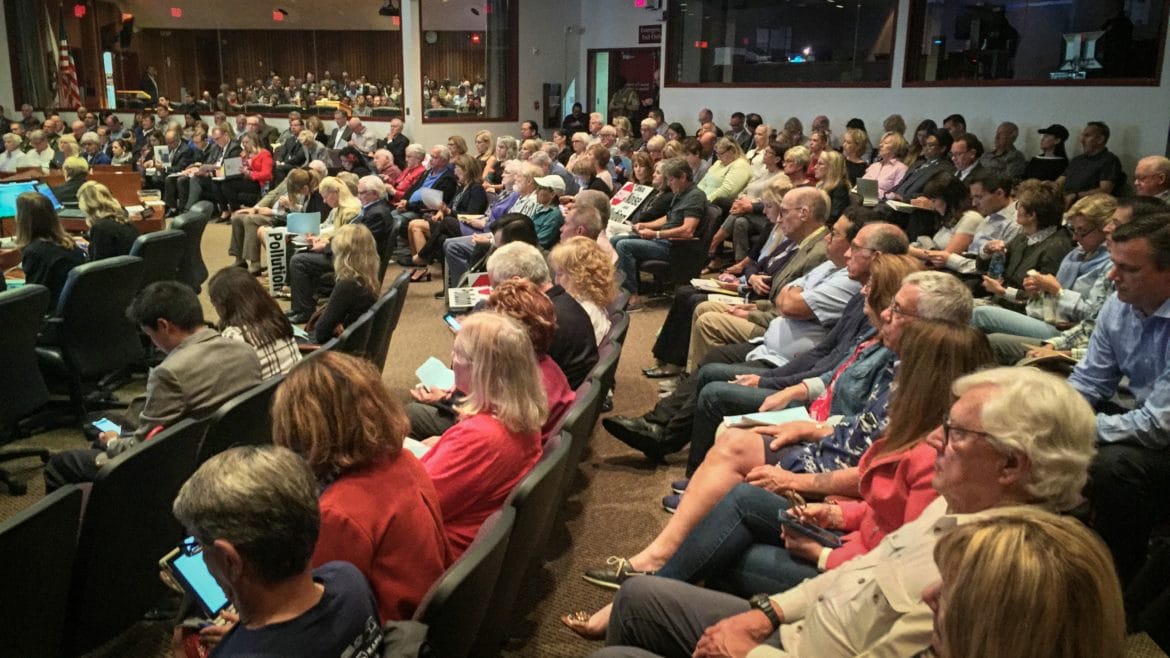 The packed Orange County supervisors meeting, including the rear overflow room, on Tuesday, June 25, 2019 when residents turned out in force to oppose private jet expansion at John Wayne Airport.

“Of course the devil will be in the details, and we hope to pursue that afterwards,” said Nancy Alston, a board member of Stop Polluting Our Newport (SPON), which supported the plan unanimously approved by the supervisors Tuesday.

County officials, after repeated questions from Voice of OC in the hours after the decision, could not provide official numbers backing up their claim that their new plan preserves the existing balance of planes at the airport.

“The more jets that call Orange County home, the more take-offs and landings. We are not going away. We are growing stronger. We are standing together,” said Shana Conzelman, a resident of Lido Isle in Newport Beach. She was one of three dozen speakers on the issue Tuesday, all of whom opposed expanding private jets at the airport.

Residents, some with signs that read “STOP JWA Noise and Pollution,” packed the supervisors’ hearing room and overflow room and at times shouted their opposition to board actions.

Much of the frustration was directed at a plan by Supervisor Michelle Steel – and approved by the supervisors – to allow an international terminal for private planes to operate from 5 a.m. until midnight.

When Steel announced it, audience members shouted “No!” She didn’t explain her reasoning for the hours.

Steel, who represents the airport area and beach communities most affected by the jets, proposed the overall plan to reconfigure the airport’s private planes and said it would be “keeping the same mix” of aircraft. 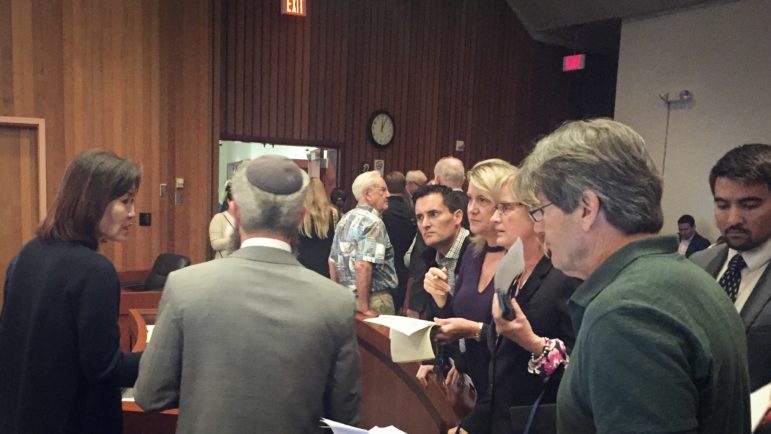 Supervisor Michelle Steel (left) speaks with Costa Mesa Mayor Katrina Foley and a reporter after the supervisors approved a plan she said would keep the “same mix” of planes at John Wayne Airport.

They faced intense pushback last month from Newport Beach residents who live under the flight path and cited health and noise concerns, as well as from small plane pilots concerned about losing aircraft spaces. Faced with the backlash, the supervisors paused and publicly backed away from the original expansion.

At another packed meeting Tuesday, Newport Beach residents and officials again urged the supervisors to keep the existing balance of aircraft, and some warned the supervisors’ re-elections would be at risk.

But many details remained to be worked out, like whether the supervisors’ new plan will increase the number of private jets and how early and late international flights can operate.

Many of the details won’t be known until an unspecified date in the future when supervisors decide on a bidding process for new airport operators – known as the “request for proposals” for “fixed-base operators.”

County officials could not provide numbers Tuesday backing up Steel’s claim that the new plan preserves the existing mix of aircraft. The plan limits “medium and large general aviation aircraft” to 25.6 acres, with small aircraft getting 34.6 acres.

Asked how many acres are currently devoted to medium and large aircraft, county spokeswoman Molly Nichelson did not have an answer after checking with airport staff.

Steel also did not return phone and text messages asking for the current acreage. A county official said the planned mix was similar to an estimate of the current uses from the Southern California Pilots Association, which couldn’t be immediately contacted for confirmation.

Fred Fourcher, who founded the pilots’ association, asked the supervisors to enshrine in their official action that the balance of planes at the airport would be preserved. The supervisors declined to do so.

The way the county defines “small” aircraft includes private jets, according to a pilot who spoke to the supervisors during public comments.

The county’s definition of “small” aircraft is wingspans of up to 49 feet. That includes several types of private planes at the airport, said Craig Ryan, a Corona Del Mar resident and member of the Southern California Pilots Association.

Small propeller planes fit within 40-foot hangars, but “when you get beyond that, you get these jets,” he said, showing photos of private jets with wingspans between 40 and 49 feet.

Ryan said 76 percent of the current hangars at John Wayne Airport are 40 feet wide. “[We’re] just asking that you preserve the ratio,” he said.

The supervisors kept the hangar size at 49 feet or less, and told the audience the current mix of planes would be preserved.

“The way this has worked has been exemplary. We’ve heard from the citizens, we’ve addressed the concerns of expansion of John Wayne Airport,” said Supervisor Don Wagner, to which audience members shouted “No!” in response.

Under questioning from Supervisor Andrew Do, the supervisors’ lawyer, County Counsel Leon Page, cautioned against limiting the hangars to 40 feet wingspans.

“There is a – I think a legal risk,” Page replied. “The concern would be that board would be discriminating against certain classes of aircraft.”

Residents warned supervisors against expanding jets, and questioned their motives.

“At the meeting in April, [Chairwoman] Bartlett mentioned her friends with private jets several times, which makes me wonder who it is she’s representing,” said Newport Beach resident Susan Pearl.

“As residents of Orange County, we’re here to remind the Board of Supervisors that they do not own the airport – they work for us, the residents. We elected you, and through the election process, we can fire you.”

“The Orange County Board of Supervisors should not prioritize a handful of billionaires over the thousands of Newport Beach and Costa Mesa residents,” said Assemblywoman Cottie Petrie-Norris, whose district includes the airport, in a written statement read aloud by an aide.

Steel responded by saying she met with everyone who asked to meet with her about the airport changes.

“If you were not included [in] that group, you never really asked to sit down with me,” Steel said.

Do, in response to criticism that the supervisors were engaging in back-room deals, pointed to a large packet of papers he said he’s received from various groups over the prior 48 hours.

“So the idea that somehow information is somehow being withheld from you, it is not true. This is an evolving process that involved many stakeholders, and they all have to be given an opportunity to provide information,” Do said.

“Please, let’s just not jump to conclusions and make comments like that, because I take it very personally. ‘Cause I put a lot of work into decisions I make up here.”

Under a landmark 1980s settlement agreement, commercial airlines are limited to taking off between 7 a.m. and 10 p.m. at John Wayne Airport, though the restrictions do not apply to private planes.

Several Newport Beach residents raised concerns that supervisors were setting the stage for an expansion of private jet flights by charter airline JetSuiteX or its parent company JetSuite.

JetSuiteX isn’t limited by the settlement agreement because it’s considered “general aviation” and not commercial aviation. It sells individual tickets on chartered plane flights from John Wayne Airport to Las Vegas and Oakland.

”There has been a 607 percent increase in commuter aircraft [at John Wayne Airport] from April 2018 to April 2019” due to JetSuiteX, said Newport Beach resident Jeanne Massingill, citing numbers she said the city confirmed.

“This is terrifying. I see it, I feel it, I hear it. It’s polluting my air. It’s terrible,” she said.

She disputed concerns that JetSuiteX is doing an “end run” around the settlement agreement’s flight restrictions by being classified as “general aviation.”

“It is important for the public to understand that JetSuiteX is classified as a commuter carrier, and subject to noise limitations, commercial curfew hours, and passenger capacity limitations applied to the Airport’s 10.8 [million annual [passenger] cap,” Thompson said in an emailed statement.

Two top county officials – Do and Page – suggested at Tuesday’s meeting that commenters were correct about JetSuiteX not being limited by the settlement agreement. Airport staff later said that is not the case.

The supervisors didn’t respond to the concerns about JetSuiteX, other than to say decisions about it will have to wait for later, potentially when the bidding documents are brought forward at an unspecified date.

When Steel proposed the 25.6-acre limit for “medium and large” aircraft, Bartlett wanted to amend it so the limit would go away if anyone files a lawsuit against the county. She asked the other supervisors for their support, but got no traction.

The next step is for airport staff to return to supervisors with draft bidding documents – known as the RFP – that would define more of the details of the airport changes. No date has been set for the documents to come to supervisors for approval, which must be done at a public meeting.