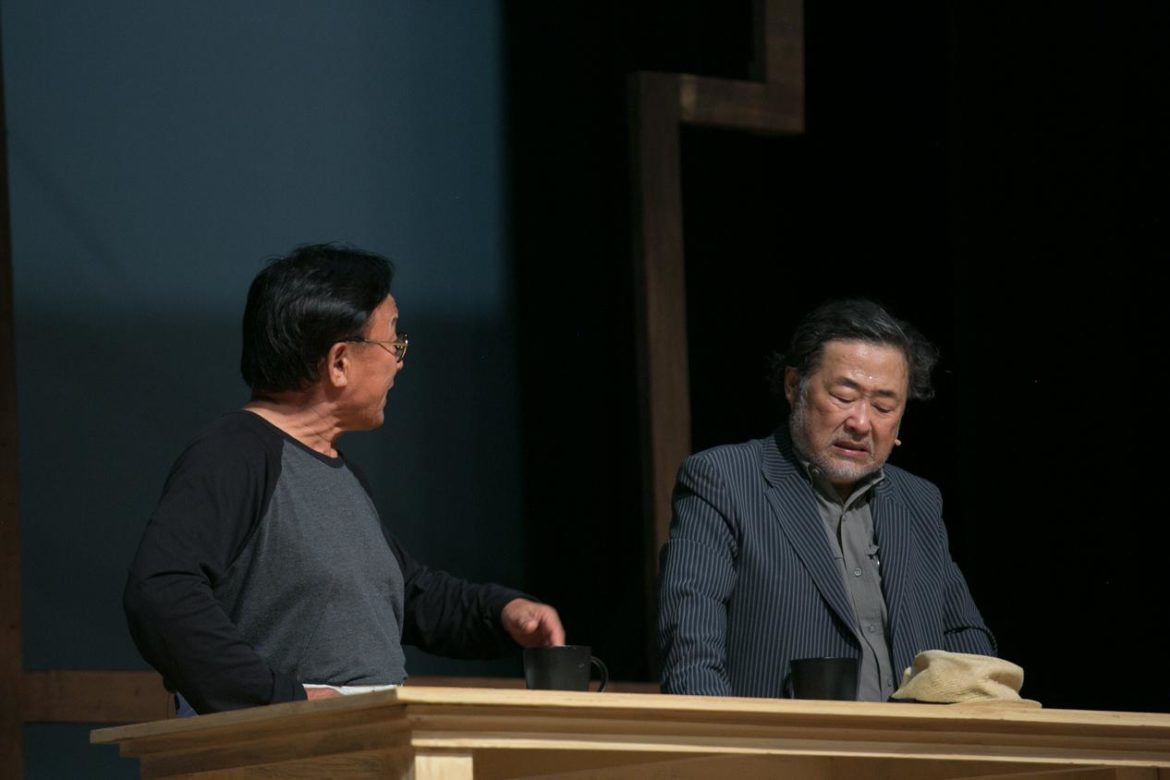 Actors rehearse a scene for Shakespeare Orange County’s upcoming Korean-lanugage production of “Death of a Salesman.”

Everyone loves a story with a happy ending – all the more if the journey involves twists and turns, cliffhanger moments and elements of comedy and farce, with a villain or two to raise the stakes.

Over the last couple of years, Shakespeare Orange County has lived through such a tale. At times it looked like the venerable theater company, a longtime fixture at Garden Grove’s Festival Amphitheatre, might not live to celebrate its 40th anniversary this year. But the recently announced season in its new home at Santa Ana College is longer and more ambitious than its previous few seasons in Garden Grove – pretty impressive for an organization that recently came within a hair’s breadth of disappearing altogether.

“Last year, we didn’t even have a season,” said John Walcutt, Shakespeare Orange County’s artistic director. Until then, the company had been doing well under Walcutt’s leadership. “By my fourth season, two summers ago, we had tripled our audience from my first year as artistic director. We were really onto something. We had tapped into a younger, more diverse audience.”

But that success had no effect on the company’s relationship with the City of Garden Grove, which owns the amphitheater and ultimately controls who gets to use it.

“The city kind of fumbled us around for a while,” Walcutt explained. He couldn’t get city officials to promise solid dates for his company’s season, which made it impossible to program anything. “The whole thing ended with a meeting we had with the mayor. We said, ‘Give us a straight answer. We can’t get one out of the city or the group that controls the amphitheater now. How do we get in there?’ The mayor said, ‘We definitely want you here.’ We said, ‘When?’ He said, ‘We can probably let you come in on a Friday night and do a show.’”

Walcutt laughed. “I said, ‘That’s not really the way it works with theater. It’s not like a concert.” After hosting the company annually since the early 1980s, it shocked Walcutt that the city would suddenly fail to understand theater’s fundamental requirements of time and space.

At that point, low on resources and unable to mount a season, “We were ready to hang it up,” Walcutt said.

Then, as if by magic, an offer materialized from out of the blue. “Santa Ana College came along,” Walcutt said. “Sean Small, their scenic and lighting designer, has been around here a long time. We had hired him to design a set. He came to us and said, ‘We’d really like to get you to come over to Santa Ana College. We have three theaters, including a brand new amphitheater. And we have no summer program at all.’” 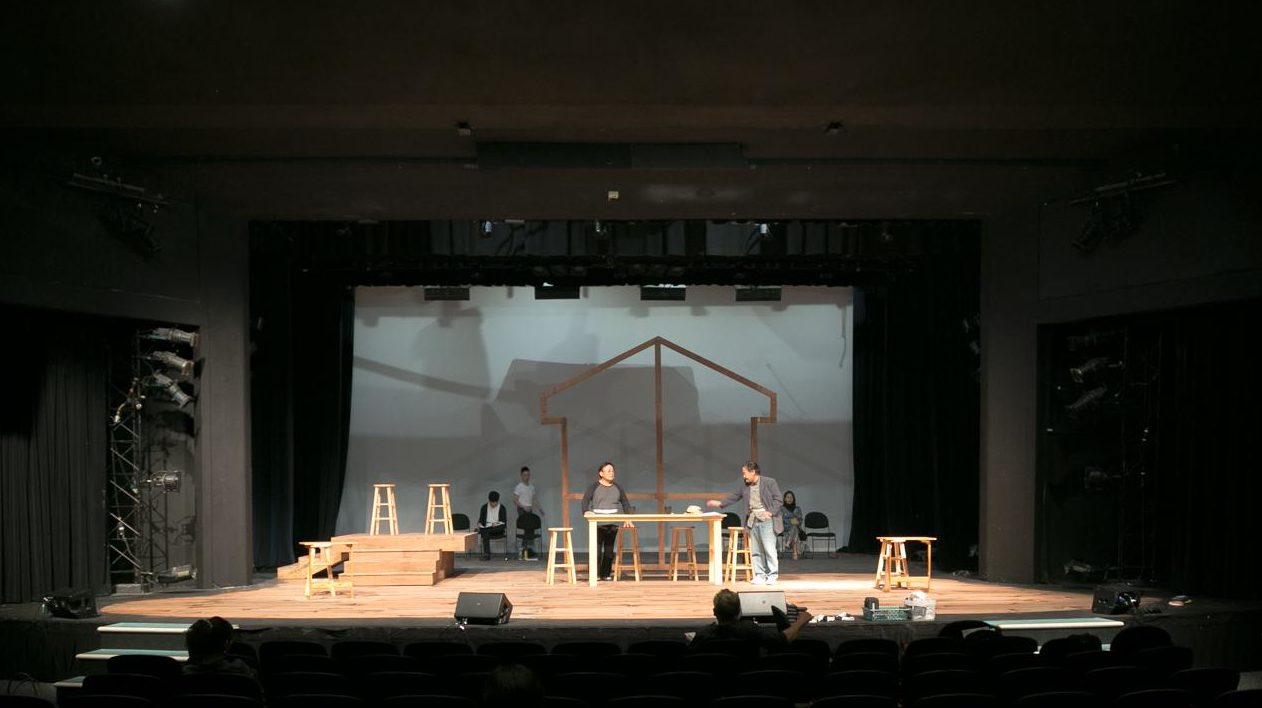 Shakespeare Orange County actors rehearse for the upcoming production of “Death of a Salesman” in Phillips Hall at Santa Ana College.

The offer was undeniably tempting. The facilities at Santa Ana College are a vast improvement over the company’s old digs: a 400-seat proscenium theater, a new outdoor amphitheater with 300 seats, and a 60-seat black box performance space.

Announcing a Season on Faith

At first, Walcutt was unenthusiastic about the offer. “We were kind of discouraged and said, ‘we don’t think we can go forward. We don’t have enough support.’ Sean said, ‘Let me make a proposal to our dean and our board. We think we can give you free college tuition for the young people who can participate.’”

That’s when Walcutt and the Shakespeare Orange County board members started to get excited. “At that point, we thought that it could be a cool thing. We knew we had a lot of kids from the Orange County School of the Arts as well college kids who would want to get involved. So, Small and Chris Cannon, who is the head of their theater department, went to work and came back to us with a proposal.”

Those hopeful beginnings happened last November. Then came the long and complex process of turning the proposal into reality. “They had nothing concrete to offer us at first,” Walcutt recalled. “They had to go through their board and encountered a lot of bureaucracy. Time dragged on. At a certain point, we had to announce a season. We did that on faith, without any kind of a contract. But we were committed, and on we went.”

As an outside contractor, Shakespeare OC gets the benefit of the college’s facilities and staff. The college will construct sets and provide other in-kind services.

In return, the college receives money from the state by registering students for classes offered through Shakespeare Orange County. “Everyone who participates who isn’t an Equity guest artist has to register for classes,” Walcutt said. “We got 100 people registered for classes that didn’t exist before we got here.” 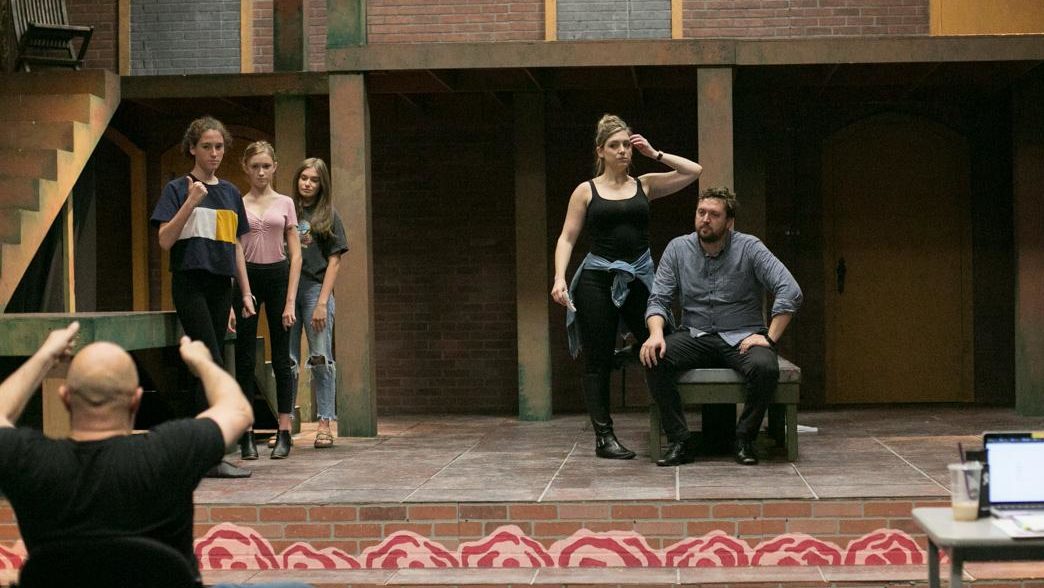 Professional and student actors rehearse together for Shakespeare Orange County’s upcoming projection of “Antony and Cleopatra.”

Walcutt discovered there were a few surprises in the new relationship, mainly in the form of hidden costs, lost revenue and last-minute demands.

“We had to pay registration fees and parking passes for all these people, which cost us $10,000. We also lost our place at (Garden Grove’s annual) Strawberry Festival, which is where we made $20,000 in past years.” The college’s board recently decided to take 40 percent of the company’s box office revenue, which Walcutt called “a nasty sting.”

“We are really clawing our way through it. All of our board has chipped in more money than we could afford to. And we are pushing hard to sell tickets. If we sell the way we were selling before, we will be fine.”

Shakespeare Orange County’s season contains its signature unorthodox and culturally inclusive line-up: Shakespeare’s “Romeo and Juliet” adapted for children, produced in conjunction with a Korean theater group as a part of the summer youth program; a Korean-language production of “Death of a Salesman” (with English subtitles); Shakespeare’s “Much Ado About Nothing,” set in the Wild West; a film noir version of Shakespeare’s “Antony and Cleopatra,” with Walcutt starring as Antony; and the first production of “Zoot Suit” in Orange County.

You can get details about the company’s 2019 season at www.shakespeareoc.org/2019-season.