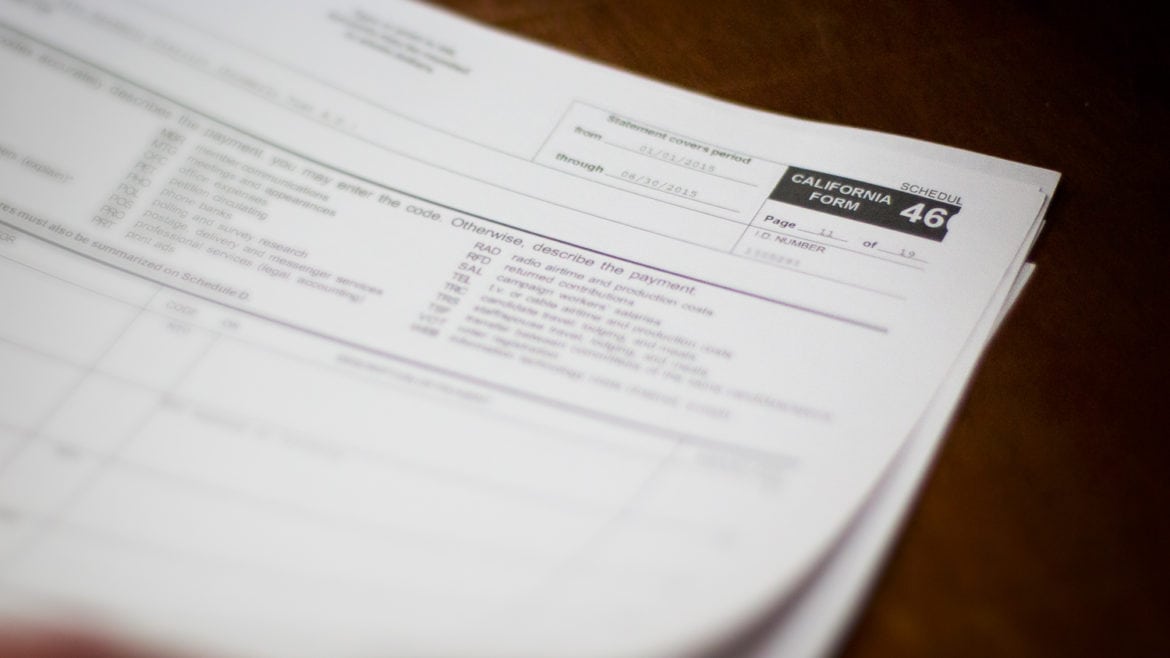 460s are used to show campaign donations, making sure that donors and those running for office are following the law.

Keeping tabs on local government should be easier than ever.

In an increasingly digital world, we should expect our officials to use the internet to their advantage, taking the opportunity to increase communication and transparency with the people they serve.

While California law only requires public records to be shared upon request, technology has increased our ability to share information, thus setting a new standard for ease of access.

For this reason, a team of Chapman students put together an accountability journalism survey project to measure which Orange County cities make transparency and accessibility a priority.

The survey used two government forms – the Form 460 and Form 700 – to measure how easy each Orange County city makes it to find information about city officials.

Form 460s are used to show campaign donations, making sure that donors and those running for office are following the law.

These two public documents disclose transparency, and scrutiny into these documents have revealed ethical violations in the past, such as incomplete Form 700 filings by the District Attorney’s Chief of Staff in 2015 and a water official’s votes on engineering contracts in 2012.

“In this day and age, it should all be on the internet unless its cost prohibitive,” said Denah Hoard, head of the Orange County Ethics Commission. “The more transparency you have, the less people believe that there is anything nefarious going on. The more open the government is, the more the people trust it.”

The team of Chapman student journalists created a system of scoring that is displayed in a simple graphic.

Cities received a rating of green, yellow, orange, or red based on their level of transparency with relation to easy review of officials’ Form 700s and Form 460s.

If a city provides both of these forms directly on its website, it earned a green rating.

Eight cities received a yellow rating, because they provided their Form 460s and a link to the Fair Political Practices Commission (FPPC) website, where all Form 700s are required by state law to be filed.

There are ten cities that don’t post Form 460s and only provide web links to the FPPC website got an orange rating to signify that they are “barely transparent,” according to the scope of our investigation.

Red ratings went to cities that do not post either form on their own website, either omitting information about forms, providing them only by public records requests, or, for Form 700s, not linking to the FPPC website.

Student reporters emailed all 34 Orange County cities a summary of findings on Tuesday of this week.

At that point, there were four red cities, 11 orange cities, eight yellow cities and 11 green cities.

Within days, city websites started to get updated to include the Form 460s and Form 700s.

City officials that once said it wasn’t possible to post the documents now altered course.

Back in November, City of Orange Chief Clerk Robert Zornado said such documents could not be added to the website because the city budget was tight.

However, after sharing the student journalist survey findings this week, Orange City Manager Rick Otto updated the city website within the day.

“The online posting of the Form 460s was not a budget issue. Rather, we were simply unaware that we were out of compliance, and acting swiftly to remedy the situation. I apologize for any misunderstanding,” Otto wrote in an email.

The City of Westminster’s website was also updated within one day of emailing the city clerk.

There were a few cities that stood out for how easy they made it for people to find out critical information about their elected officials.

The City of Los Alamitos is one of the smallest cities in the county, with a population of about 11,500 people, yet their website was found to be one of the most navigable.

The City of Irvine also received a green rating and makes their forms easy to find.

However, this is not the case for many cities.

These kinds of accountability forms are often times difficult to find, even on some of the cities’ websites that were marked as green. The survey also found this to be true with some cities marked as yellow.

Placentia – a green city – has copies of Form 460s and Form 700s, but not for all years where candidates ran for office.

Rancho Santa Margarita’s website has tabs for Political Forms and Filing Requirements and Election Information, but does not mention Form 460s on either page.

And when it comes to providing conflict of interest information (Form 700s), most city websites link to the FPPC as opposed to providing residents with actual documents to review.

Some cities claimed they did not have the tools or staff to put the forms online, but other city officials noted that doing so is just a matter of scanning the forms and having them uploaded online.

Hoard acknowledged that using an online database can be burdensome, but that in the long run it’s the direction cities should be moving.

“It’s not necessarily cheap or easy, so I understand the hesitation to update documents regularly,” Hoard said. “Making it online means it’s also easier for public employees. It’s a win-win when the public can find it easily and the public employees don’t have to continually [respond to public records requests].”

Many city employees said they don’t get a lot of requests for these forms. Villa Park City Manager Steve Franks said our reporter was the first person to call the city in 2019 to ask about these documents.

Some cities claim the cost of getting these forms up is something they have not prioritized.

For some cities, though, the process of putting the public documents online requires technical resources.

“We don’t have the software to put any records online,” Fountain Valley City Clerk Administrator Rick Miller told us in November. “It’s in the process, probably not going to happen for another couple months, but it hasn’t been completed yet.”

Mitzi Ortiz, the city clerk of Aliso Viejo, said that she is looking into putting these forms online in the future, but “it just requires the redaction of information and requires staffing.”

OC Ethics Commission Executive Director Hoard underscored the importance of government openness for an effective civic discourse, saying “I can’t tell you how much I believe in transparency, especially in this day and age.”

When asked how people could ensure their local government was working to serve them, she cited the importance of individuals taking the initiative to educate themselves.

“Education is the number one priority,” said Hoard. “That’s the way we can get this done.”

Samantha Colwell contributed to this report.

CORRECTION: In an earlier version of this story, Anaheim was listed as a “yellow” city but has since been updated to “green.” We regret the error.