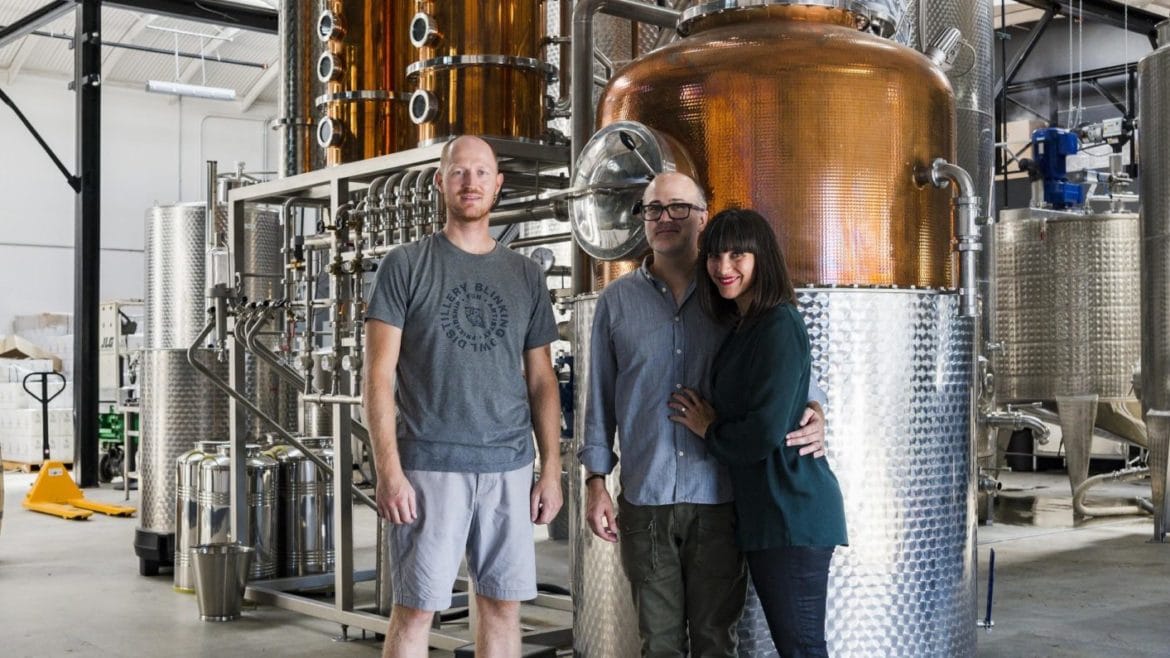 If you told me a year ago that I’d be writing about a local distillery manufacturing a hygiene product to protect both the medical profession and law enforcement, I would’ve assumed that you were being funny.

And yet, across the continental United States and beyond, this is not a test: Along with restaurants, breweries and distilleries have had to shut their tap rooms and tasting rooms to help stop the spread of COVID-19. But instead of shuttering their businesses entirely, some are pivoting to become hand sanitizer manufacturers.

In Southern California, Portuguese Bend Distillery of Long Beach and Network Brewery of Santa Ana began promoting hand sanitizer sales earlier this month. And before the end of March, Blinking Owl Distillery, Orange County’s first craft distillery since Prohibition, will join them in bottling their own.

For Blinking Owl, this pivot is not the first time they’ve had to adjust their business strategy since they opened in 2016. They’ve had to shutter their tasting room once before, in November 2019, because their retail priviledges were temporarily suspended by the California Department of Alcoholic Beverage Control (ABC). These shutdowns were a result of misinterpretations of the tasting room laws monitored by the ABC. Their version of the shut down is explained in length on their website.

So far, their troubles have not put them out of business and they hope this new product will keep them going in the meantime. Purchases of their other products are still available via their online portal.

When Should I Use Hand Sanitizer?

Already equipped with hoses, pumps, scales, packaging supplies, and minimal lab equipment, the workspace of a distiller already possesses many of the tools needed to complete this task. Head Distiller Ryan Friesen elaborates further, “Our biggest advantage is that distillers work with the main active ingredient in hand sanitizer every day; it’s our job to work with ethanol. More than anything, this is what makes distillers the ideal people to quickly turn their businesses to serve this need. We could never do this as well as, or in as great a volume as the folks who make hand sanitizer for a living. But in a time of need, we are the right folks to adapt quickly to help our local communities and emergency and health care workers.”

Friesen broke down the recipe they are adhering to, which is according to the World Health Organization’s (WHO) recommended formula: 80% ethanol (basically, a higher concentration of vodka), 1.5% glycerol (possessing antimicrobial and antiviral properties), and about one-tenth of a percent of hydrogen peroxide. “The ethanol is the active ingredient. The glycerol is used to moisturize your skin, because the strong alcohol has a drying effect. And the hydrogen peroxide (H2O2) is used to kill any bacteria that may be present in the water or glycerol used in the mixture.”

The solution is blended and packaged at Blinking Owl, utilizing both sourced and their own ethanol to meet the high demand. Although they are familiar with incorporating ingredients for their own products, the toughest part is getting the math correct for their Dirty Bird Hand Sanitizer blend, the name being a nod to the distillery’s spirit animal. Friesen also made a point of mentioning how glad they are to have the WHO guidance, as they take seriously the fact that they are creating a substance people will be using on their skin to protect them.

Blinking Owl, which normally distills gin, vodka, several types of whiskey, and aquavit, produced over 2,000 gallons of hand sanitizer this week alone, and they are forecasting 4,000-5,000 gallons weekly for the foreseeable future. A 16-ounce bottle will be available soon for the public to purchase during limited pick-up hours. You can also have it shipped.

However, most of what they produce has already been spoken for. According to their website, “We will be donating as much product as we can to first responders/medical workers and those in the greatest need including restaurant owners who need sanitizer to remain open for take out orders.” The quantities produced for these organizations will be distributed in 55 gallon drums, five gallon containers, and single gallons.

“We are doing everything in our power to supply everyone we possibly can. Kirsten has been the financing force behind this, and we are able to provide to the magnitude we are able to due to her generous funding to get us supplies,” CFO Robin Christenson said. Business partner and friend Kirsten Vangsness starred on the CBS drama “Criminal Minds” for 14 seasons. She has been an integral part of Blinking Owl’s adjustment in production.

Blinking Owl hopes to add homeless shelters, senior centers, and cancer patients and centers to their recipient list. Through their online shop, you can help support this effort by donating. Per Christenson: “People have been asking to donate, so we have a place where you can do so. Your donation will 100% go towards the bottles given for those with the most need.”

This past Tuesday, March 24, 2020, the food and beverage industry coined the phrase “The Great American Takeout.” Consumers were encouraged to visit their local eatery or bar that served food and pick up a meal to-go in support of small business. I frequented my favorite Vietnamese iced coffee brand, a friendly baker by the airport for muffins, and one Newport Beach restaurant helmed by a chef I’ve known for at least a decade to order a Mason jar cocktail with my Brussels sprouts and burger.

One day isn’t enough, though. Restaurant and bar staff, like the rest of us, are suffering for the long haul. I am suggesting a weekly “Takeout Tuesday.” Dining out is a luxury for many, and I don’t expect anyone to take it to the extent that I did. Getting take-out once a week is what I propose, but twice (or more) is my own goal.

Another way to support your favorite restaurant is through donations. Many businesses have already set up GoFundMe accounts for their employees to collect donations due to mass layoffs.

Anne Marie Panoringan is the food columnist for Arts & Culture at Voice of OC. She can be reached at ampanoringan@voiceofoc.org.