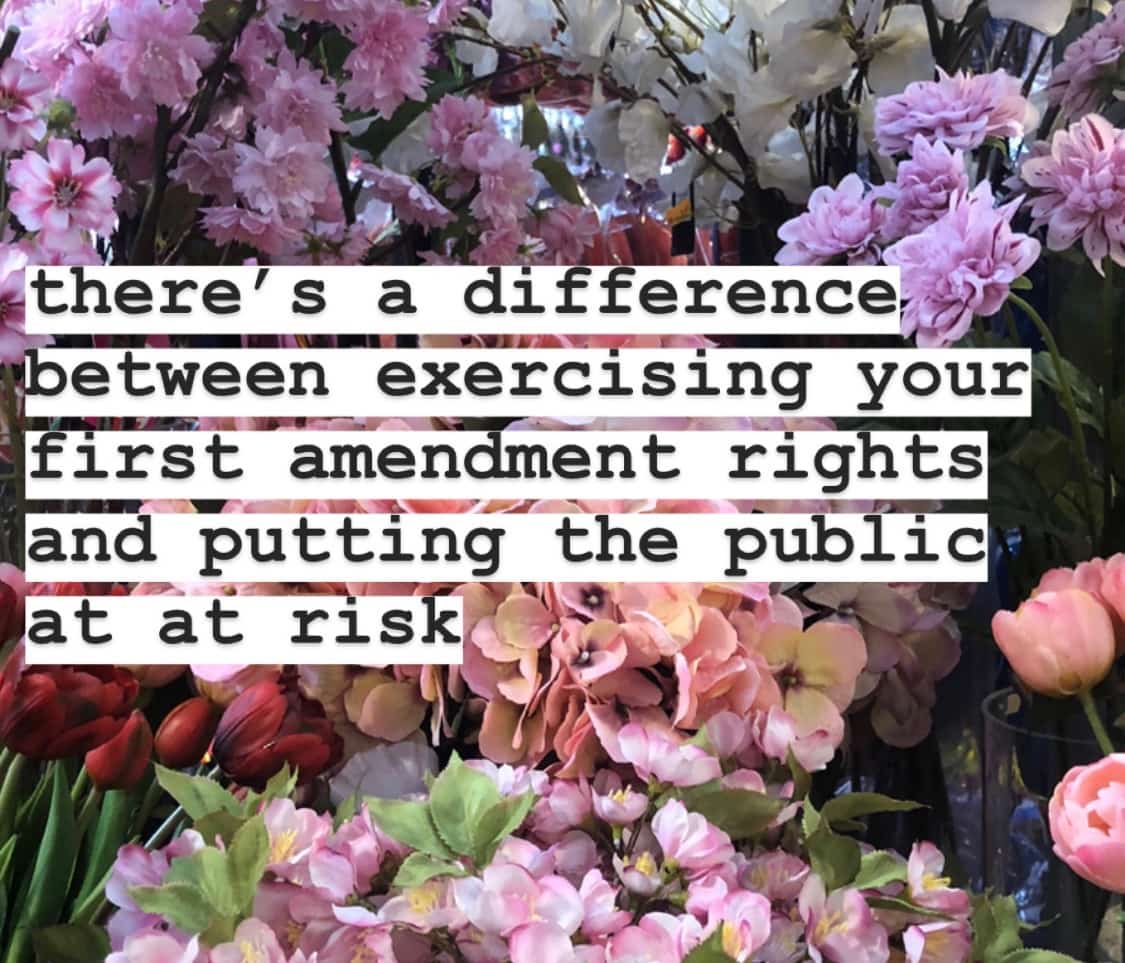 On Saturday, May 1st, Huntington Beach was the location for yet another COVID-19 protest. With people carrying signs criticizing the tyranny of Governor Newsom and claiming that the shut down infringes upon their Constitutional rights, the streets were more comparable to a page from Where’s Waldo? than to a city that is supposed to be practicing social distancing.

Once again, a health issue has become the center of political discourse, resulting in both sides engaging in fundamentally different arguments, preventing any real change from occurring (except for maybe more people getting Twitter accounts to keep up with the latest news). However, what I have come to be most frustrated with is the spread of misinformation, not only regarding the virus, but regarding the political climate in my own hometown. So, in this piece, I will attempt to correct some of these misconceptions.

(Note: I will not be including images of the protests, because I believe that in sharing these photos, we are bringing more attention to their cause and aiding in the spread of misinformation.) 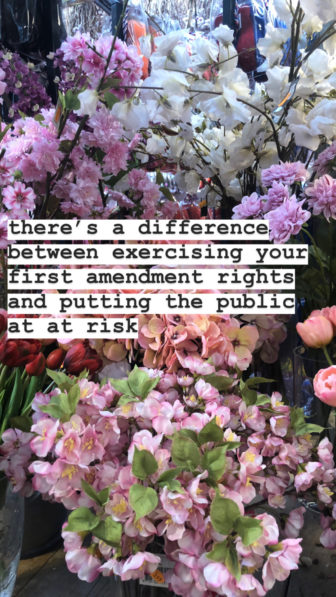 One of the most common arguments I have seen since the initial HB protests in April is the idea that attempted limitations to these demonstrations on the part of citizens and lawmakers alike are direct infringements upon the freedom of speech guaranteed by the First Amendment. Undoubtedly, the First Amendment is part of the very core of our nation, promoting a dialogue of democracy that allows individuals to criticize their government and keep authority in check. However, with this liberty also comes social responsibility, resulting in a balance that cannot be overlooked, especially during a global pandemic.

For instance, in 1919, the Supreme Court ruled on the landmark case Schenck v. United States, siding with the United States that, by encouraging individuals to disobey the World War I draft, Charles Schenck was posing a “clear and present danger” to the nation during wartime. As a result, Schenck faced the repercussions for his actions under the Espionage Act of 1917. In his statement regarding this ruling, Justice Oliver Wendell Holmes made the analogy of “falsely shouting fire in a theatre and causing panic;” while this has come under criticism for being an overused dictum that is chiefly used to fight against unwanted speech, it is nevertheless applicable in appropriate situations. In other words, while posting on social media, making posters, and writing lawmakers are more than valid methods by which to express political opinions, gathering in large crowds directly puts people at risk and is, therefore, subject to limitation. With an estimated 3,240 cases of COVID-19 and 71 deaths in Orange County alone, it is more important than ever to engage in social distancing.

One of the more absurd arguments I have come across is the idea that protestors, such as those in HB, are the “modern-day Rosa Parks.” To make the argument that these people are comparable to Rosa Parks, however, is reliant on the belief that people are victims of oppression and are subsequently engaging in civil disobedience. What I find most ironic about this claim is the fact that the very people who are claiming to be oppressed are citing the Constitution as their evidence — the same Constitution that was written by aristocratic white males, many of whom owned slaves. Being unable to attend the beach due to a public health issue is not oppression; segregation and racial-based violence are. The fact that these issues were not even addressed until the ratification of the 14th Amendment (and the subsequent selective incorporation of certain liberties on the basis of the Equal Protection Clause) is evidence enough for the fact that the Constitution in its original form does not sufficiently address the issue of oppression, and this legacy has continued into the modern day. If these protestors wanted to fight against oppression, they’d be citing the petition for justice for Ahmaud Arbery, not putting the immunocompromised at risk so that they can go to the beach.

We Should Be Ashamed to Live in Huntington Beach

Due to the protests and a recent viral tweet of HB teens openly defying the shut down at a party (which I will not link due to my belief that there are more effective methods of upholding accountability than cancel culture), many people have gone onto Twitter to express hatred for their hometown. However, not only does this overlook the privilege we have of living in such a beautiful city, but it feeds into the narrative that HB is full of spoiled rich kids who only care about themselves. In reality, there are many who are adhering to social distancing guidelines and actively correcting misconceptions on social media. 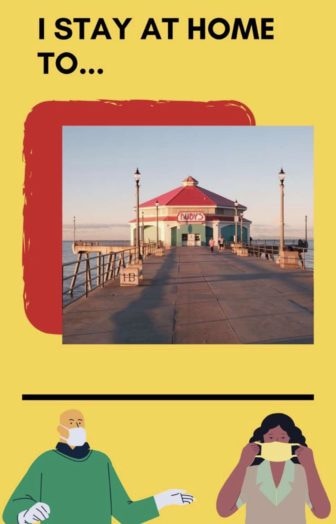 One such example is the recent social media campaign started by Kara Tran Wright on the @heart2artproject Instagram. Partnering with many clubs on the Huntington Beach High School Campus, including both the Young Republicans and the Young Democrats, she has encouraged people to post the picture on the left with the hashtag #hbprotest. In turn, she is reconstructing the narrative and attempting to spread awareness and positivity beyond partisan boundaries.

“Herd immunity” is a phrase that I’ve heard far too many times in the past months, and I feel as though many of the people who use it are often misunderstanding it. Yes, herd immunity — in which a large majority of the population is immune to a disease as a result of exposure, therefore slowing the spread of the contagion — has been relied upon in the past. However, it has been relied upon in conjunction with available vaccinations, which involves exposing individuals to weakened viral strains so that they can develop an acquired immunity.

Therefore, when people apply this epidemiological concept to COVID-19 — without a vaccine yet available — they are overlooking the negative ramifications associated with it. For instance, hospitals have become overcrowded, causing them to have to choose who gets a ventilator and, therefore, who gets to live. This is especially bad news for individuals who are less likely to survive the virus, such as the elderly and those with compromised immune systems. By advocating for herd immunity, individuals are pushing for more overcrowding and, therefore, forcing medical professionals to have to play God.

Human beings should not be left without life saving technology because they are less likely to survive. Even more so, they should not have to die alone, without access to their families or loved ones. Quite frankly, citing a misunderstood epidemiological concept does not provide sufficient justification for going to the beach and directly putting the public at risk.

The Economy Should Be Immediately Reopened

In late March, President Donald Trump tweeted that “we cannot let the cure be worse than the problem,” referring to the economic decline that has resulted from the current COVID-19 pandemic. According to recent estimates, GDP may decline by double digit percentages, and at least 22 million people have found themselves unemployed thus far. While President Trump has been criticized, particularly by the left, for implying that the threat of economic decline is worse than the threat to human lives, his tweet nevertheless highlights a very real trade-off that exists in the current economic and social climate. However, where the call to re-open the economy lacks is in the assumption that this trade off is within the government’s control; in reality, a lift of government regulations does not imply a return to normalcy.

While the 2008 financial crisis highlighted the interconnectedness of banks, this current financial crisis highlights the interconnectedness between human health and consumer trends. Since the start of the pandemic, there have been 1.2 million cases and almost 80,000 deaths in the United States alone. But even with a large number of cases, the country averaged only 264,000 tests per day in the past week. Additionally, an estimated 7% of the American population has an autoimmune disease, and an even larger demographic is immunocompromised. In turn, there is a significant portion of the population that is put at vital risk when it comes to the infection, making it necessary that they limit their social interactions. Thus, when weighing the options for economic recovery, it is important to assess the subsequent change in consumer habits as a result of very real threats to public health. While lifting government regulations may increase activity by small margins, without a vaccine or proper contact tracing software, individuals will continue to be hesitant in social interactions that may put them at risk.

What the economy is facing right now is both a supply-side and demand-side shock. Even if the supply chain is restored by re-opening the economy, that won’t change the fact that aggregate demand has decreased and will continue along this trend until the health threat is negligible. In turn, Trump’s call to re-open the economy runs the risk of prompting a “false start,” in which the economy will be revitalized only to be shut down again.

Lauren Harvey is a senior at Huntington Beach High School, and she has lived in Huntington Beach for her entire life. Part of Model United Nations and the Young Democrats club at her school, Lauren is very active in global politics. She also writes regularly on her blog, LoLo on the GoGo.