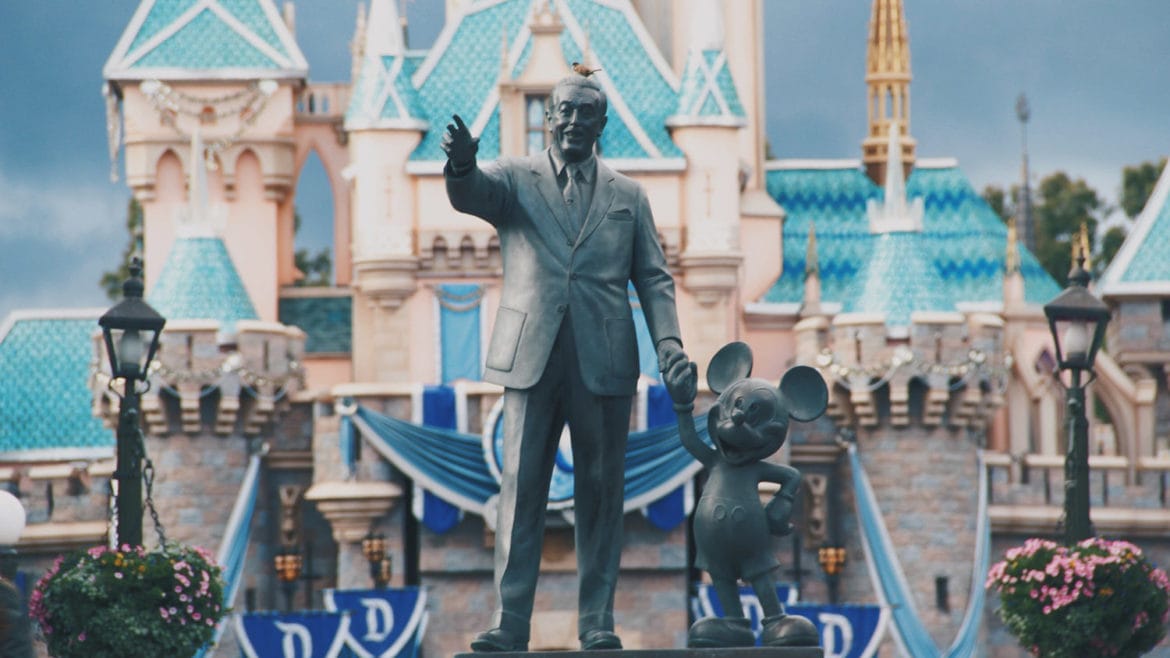 A coalition of thousands of Disneyland-area resort workers and their representative unions on Wednesday got help from Gov. Gavin Newsom, securing an indefinite delay in the reopening of Disney’s two Anaheim theme parks during Coronavirus.

Disneyland officials were pushing to reopen July 17, but workers and their unions worried about lax safety protections lobbied officials across the spectrum in recent weeks, even launching an online petition.

“Our members have been reaching out to the City Council, through Facebook — there’s just been a storm of people saying it’s not safe. And I think residents across Orange County are concerned. There’s quite a few things here. One of them is covid cases are climbing,” said Ada Briceño, co-president of Unite Here Local 11, which represents thousands of resort workers.

“The other thing is that there are people that come all over the country and the world to Disneyland — what about the guest experience and the health of the overall community,” said Briceño, who’s also chair of the Orange County Democratic Party.

A dozen unions representing 17,000 employees in Disneyland and the surrounding resort area sent a letter to Newsom last Wednesday, urging him to not approve Disney’s reopening plans. The unions are concerned about the lack of on-site virus testing and other safety measures

“We need to talk about necessary steps like testing workers, ensuring the highest level of cleanliness. So that’s why we’re still having the car caravan Saturday,” Briceño said. “We’re continuing to make progress, we just got assurance that face shields will be provided to those who need them, but testing is still uncertain and the cleanliness is still uncertain.” 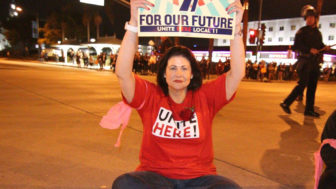 Ada Briceño, the county Democratic Party chair and labor leader, sitting in the street during the hotel workers’ rally on Jan. 24, 2019.

Although Disney announced the reopening plans a couple weeks ago, which would’ve opened the park July 17, it all depended on Newsom to modify his business closure orders.

“We have been in communication with Newsom’s office and he understands our concern.”

“The State of California has now indicated that it will not issue theme park reopening guidelines until sometime after July 4. Given the time required for us to bring thousands of cast members back to work and restart our business, we have no choice but to delay the reopening of our theme parks and resort hotels until we receive approval from government officials,” reads the statement on Twitter.

The community has also been pushing back, with over 50,000 people — and counting — signing an online petition urging Disney to delay the reopening of its two Anaheim theme parks.

Some residents and employees have emailed Anaheim City Councilmembers, urging them to delay the Disneyland reopening because of the virus.

Although Anaheim is OC’s largest city with 11 percent of the total population, it also has roughly 20 percent of all the virus cases. Most of those cases are in working-class West Anaheim, in neighborhoods straddling the resort area.

Disneyland workers have been reaching out to Voice of OC for the past couple weeks, shortly after the multinational entertainment giant announced reopening plans.

“A lot of us are already worried about going back because we don’t feel safe with the numbers of the COVID 19 still up, there are a lot that have at risk family members or themselves that they have to worry about and now with this new rule it will be more of a worry for them and for the rest of us! This is irresponsible at this time!” wrote one employee in an email.

Another Disneyland employee was concerned nobody has touched a ride for months and said the company was reopening too quickly because they haven’t been trained on the operating protocols under the pandemic.

“I’m concerned about the training aspect, because it’ll be about four months since anyone touched an attraction,” the employee said. “I think we’re opening up too early.”

Zinder called on Disney to implement more safety measures for employees, like on-site coronavirus testing and paid quarantine leave if an employee catches the virus. The UFCW represents about 3,000 workers in the Disneyland-resort area.

“If Disney is not willing to invest a little extra in employees’ health, it should not be allowed to reopen,” Zinder said.

GlynnDana Shelvin, an employee at the Disneyland Hotel, told Voice of OC that she wants on-site virus testing, increased sanitation measures and temperature checks at the gates for everyone — customers and employees.

She said she worries about the health of tourists, her coworkers and her own, as Shelvin just turned 60, she said.

“A lot of our visitors are families with small children,” Shelvin said.