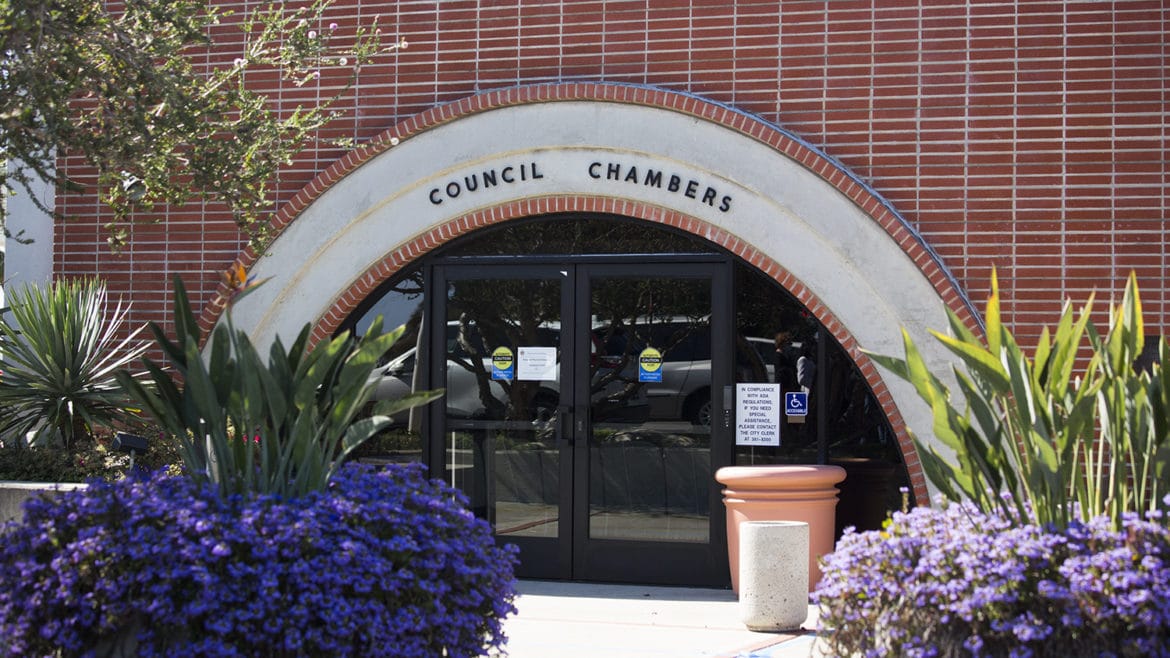 The city of San Clemente is currently headed into the next fiscal year without an approved budget, mayor, and a missing councilmember, with a gridlocked city council that has failed to approve solutions for all three of those issues.

Less than two months after Mayor Dan Bane’s departure on April 21, the city council has found itself deadlocked on over twenty votes, with Councilmembers Gene James and Laura Ferguson on one side and Councilmembers Kathy Ward and Chris Hamm on the other.

Bane submitted his resignation in early April, with the announcement he’d received a new job in Blue Springs, Missouri and would be leaving before the end of his term that was set to expire in 2022.

An analysis by Voice of OC found that the tie was present across a variety of issues, stretching from disagreements over potential ballot measures presented to voters in November to a tie over whether to continue the meeting after 11:00 p.m.

On May 5, the first open session meeting after Bane’s departure, councilmembers on both sides of the gridlock called for unity in the face of the pandemic and financial crisis that was sure to follow.

“In these hard times we should try to unify as a council for the people of San Clemente,” James said.

“We need leadership in this time,” Ward said. “I think our city needs stability.”

Less than ten minutes later, the council voted their first 2-2 decision over approving a new mayor.

Ferguson said she voted against Hamm due to “mistreatment” at a recent special council meeting where Hamm repeatedly interrupted and asked why the city would be hosting an additional meeting at taxpayer expense to discuss Gov. Newsom’s beach closures.

“At this point, I’m not sure what’s more of a joke; Gavin Newsom’s order or this meeting?” Hamm said at the meeting. “Other than costing the citizens of San Clemente, probably a couple thousand dollars we’ve really done nothing here this evening.”

In the next vote, the council remained deadlocked in a 2-2 vote over who to appoint as Mayor Pro-Tem, who would lead the meetings in absence of an appointed mayor. Ferguson was serving in the position.

Because of the deadlock, no new action was taken, leaving Ferguson as the Mayor Pro-Tem since she already held the role, despite the council voting against appointing her to the position.

“You shouldn’t be running the meeting,” Ward said before her vote against Ferguson remaining the Mayor Pro-Tem.

Later on that same night, the council remained deadlocked over whether or not to appoint a fifth councilmember ahead of the November elections, leaving the seat vacant.

“We should have five councilmembers onboard,” James said in a phone call with Voice of OC. “I’m in full support of moving that forward.”

Unless the council appoints a fifth councilmember, the gridlock situation could last for several months, and some aren’t in favor of an appointment so close to the election. Whoever is elected would serve the remaining two years in Bane’s term and run again in 2022.

“I would have concerns putting someone in who has not already been elected by the people, because that means I’m making the decision of who should be on, not the people,” Ward said in a phone call with Voice of OC.

The deadlock has also complicated the city’s relationship with the Orange County Sheriffs, who are the city’s only contractor for police services.

On May 19, the council was stuck on its decision to take down fencing the city had installed along the Pier Bowl beachfront parking lot. The beaches were still open for active use, but the fencing was intended to limit the volume of visitors to the beach.

The council directed city staff to return with a plan for their meeting on June 2 with what their potential options were after two failed votes on what direction to take.

Two days later, eight protestors were arrested by the Sheriff’s Department for attempting to dismantle the fencing. The other 100 protestors disbanded peacefully, and the OC District Attorney’s office did not respond to requests for comment on whether they would be charging any of the arrested protestors.

After the arrests, Sheriff Don Barnes sent a letter to interim city manager Robert Dunek that he was considering cancelling the department’s contract with the city.

“The City Council’s past and recent actions, or, at times, inability to act or provide direction, has made the manner in which we provide law enforcement services extremely difficult,” Barnes wrote. “The events of May 21 could and should have been avoided.”

After that, the council voted to take down the fencing in a special emergency vote, and in their current budget negotiations has promised there will be no cuts to the public safety department, which pays for the sheriff’s contract.

Ferguson and James said that the conflict at the beach was Dunek’s fault because it was his decision to put up the fencing, but in an email to Ferguson Dunek explained he could no longer direct city staff to take down the fencing after the council’s tied vote.

When asked about the deadlock, councilmembers on both sides of the divide said that they needed to work their way through the issue.

“I think every councilmember has to think about what the end result you’re trying to get to is and not think about political things that need to happen,” Ward said. “Our positions are nonpartisan.”

“I think each one of us need to exercise some leadership, some tolerance. Reach out and talk to each other about what’s going on,” James said. “The Brown Act makes it really difficult to reach out and build a consensus with people who disagree with you, because in all likelihood you’ve spoken with the councilmember who agrees with you and you’re barred from reaching out to a second councilmember.”

Ferguson said that she felt the council could function better with less personal attacks, describing comments by several councilmembers as “petty and mean-spirited.”

“Public confidence is suffering right now with the council so divided,” Ferguson said. “People want to feel they have some semblance of leadership in their community that can assure them everything is going to be ok.”

Ferguson also shared her support for the appointment of a fifth councilmember and the hiring of a permanent city manager. Dunek has held the position of interim city manager since January and has clashed with Ferguson repeatedly.

“I want to fill this vacancy, I want to hire a permanent city manager to bring leadership but I can’t do that. That’s not me. I want to move forward with these things but we’re just facing roadblock after roadblock because two (councilmembers) refuse to interview any of the candidates.”

The city council’s next meeting on June 16 is set to be packed with decisions on several issues, including a staff presentation on potential cuts to the 2020-21 fiscal year budget, and an extension to Dunek’s contract through January 2021.

This meeting would also be the last chance for the council to appoint someone to fill the fifth council seat, unless they scheduled a special meeting before June 13. According to the municipal code, the council has only 60 days since Bane’s April departure to approve a new councilmember.

“If we’re doing things that are political, we aren’t following what we said we would do when we got elected,” Ward said.

This isn’t national politics, this is our city.”

Correction: An earlier version of this article said that former Mayor Dan Bane had moved to Blue Springs, Montana instead of Blue Springs, Missouri. We regret the error.