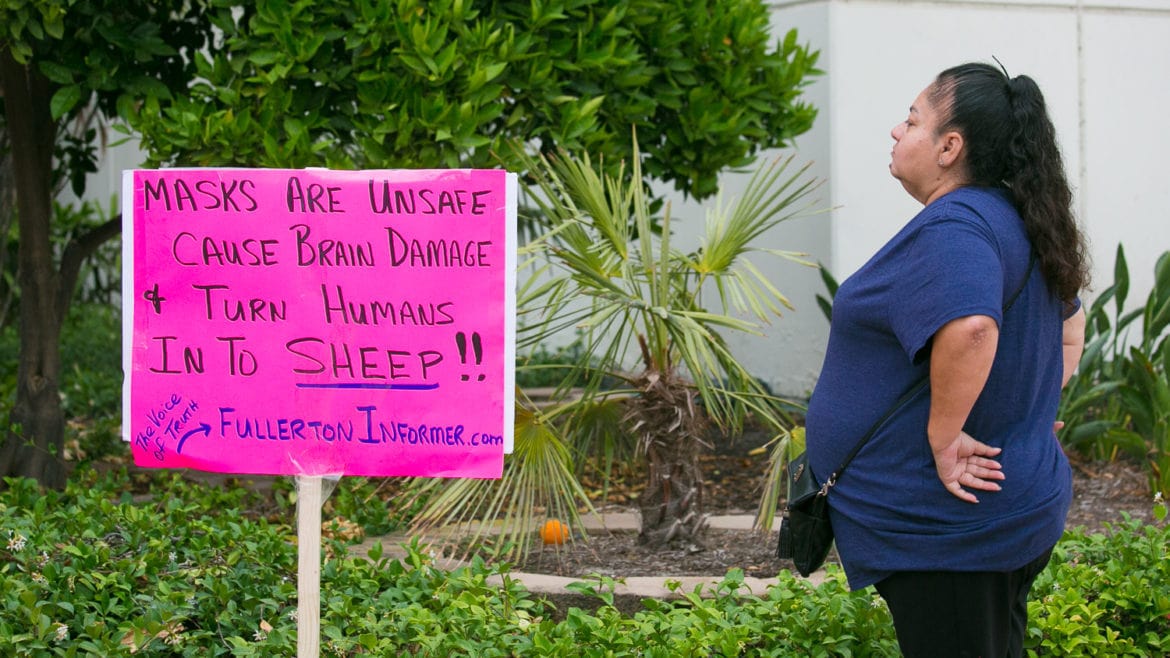 Orange County could lose out on a proposed $2.5 billion state bailout package for failing to enforce state health orders, like the mandatory coronavirus mask order.

“What we’re now looking for is accountability at the local level,” Gov. Gavin Newsom said at a Wednesday news conference.

Since the cloth mask mandate came down from the state last Thursday, no Orange County officials has publicly said how it would be enforced or handled. Instead, Orange County Supervisors, at their Tuesday meeting, focused on hospitalization data reporting and CDC mask guidelines.

Newsom said the state will distribute the bailout money on a monthly basis to keep counties adhering to health guidelines and orders.

“When it comes to the appropriation of the $2.5 billion, we’re not going to do it on an annual basis — I know how people game the system. We’re going to do it on a monthly basis,” he said. “There are some who made rhetorical comments about not giving a damn … that’s why I look forward to signing this budget that will give me a little bit of leverage.”

The bailout proposal comes on the heels of a raging mask debate in OC, with some residents protesting the masks, while others have been advocating for them.

And it comes a day after some Anaheim City Councilmembers expressed doubt that County officials — including Supervisors — can handle the virus pandemic.

“They have not taken care of us. They have not. The fact that they told Greg (Garcia), we’re going to embargo this data and not share it … they are not looking after our interests,” said Anaheim Councilman Jose Moreno at Tuesday’s council meeting.

The virus has now killed 299 people out of 11,016 cases, according to updated county numbers.

Wednesday also saw the highest number of deaths reported in a single day at 26. It also marked one of the highest hospitalizations, with 363 people hospitalized, including 145 in intensive care units.

Over 5,200 people have recovered from the virus and nearly 228,000 tests have been conducted throughout OC, which is home to roughly 3.2 million people.

Anaheim’s facing an estimated $75 to $100 million budget shortfall and city officials hope Disneyland’s plans to reopen next month are approved by Newsom’s administration so the city can begin generating resort revenue.

But Councilwoman Denise Barnes said people’s confidence will plummet if masks aren’t enforced by either the city or County.

“I would love to have that citywide order affirming what the state and the Governor is asking for,” Barnes said. “If we really don’t insist on this, I don’t see how people … are going to come to the city and see how we’re just spot on when it comes to the safety of our tourists and residents.”

But a majority of her Council colleagues said masks should be optional and not forced on people.

Chau walked the mandate back to a strong recommendation June 11.

Newsom took issue with such treatment of public health directors.

“There’s no nobility in that. You’re not a bigger person because you threatened someone else, you’re a weaker person,” Newsom said. “Many [health officers] had to quit their jobs. All they wanted to do was keep you safe using health and data and science … This is not some ideological issue. This is about keeping you safe and your loved ones safe.”

“The reality is I’m not naive. People are mixing and that is increasing the spread of this virus. It shouldn’t surprise anybody. As we not only reopen … but we begin to reopen our households and we begin to go back to our old ways and our old habits, the consequence is we are spreading this virus and its incumbent upon us to recognize that,” Newsom said.