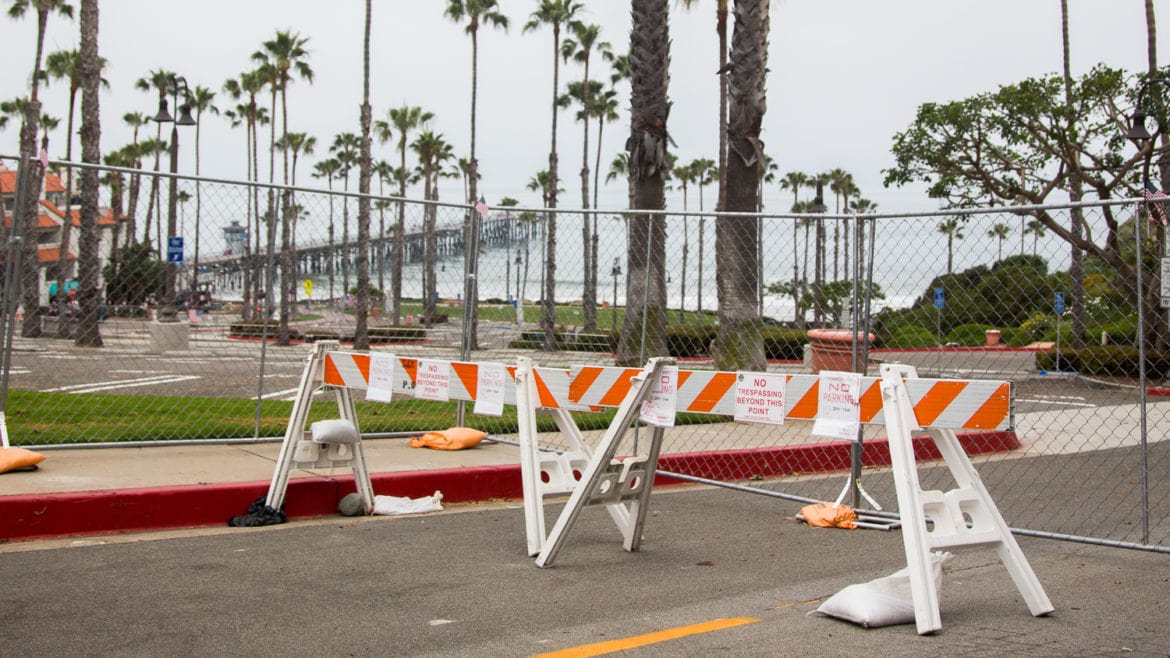 A view of the San Clemente Pier from the Pier Bowl parking lot on May 27, 2020. The fencing has since been removed.

The action comes after over a month of angst from the public and two members of the City Council, repeatedly criticizing Dunek’s handling of issues during the COVID-19 pandemic.

The change represents a big reversal for the council, which just two weeks ago voted 3-1 to offer Dunek an extension to his contract contingent upon Tuesday night’s vote when the body voted 2-0 against the extension with two council members abstaining.

Dunek came out of retirement to work as the interim city manager after serving as Lake Forest city manager for over 20 years, and was restricted to working under 960 hours in a single fiscal year to retain his pension.

Due to extended periods of work during the pandemic, Dunek’s hours ran out several weeks ago, resulting in him having to immediately go on vacation while the council decided whether or not to extend his contract as the city starts its new fiscal year on July 1.

Council members Laura Ferguson and Gene James have been Dunek’s most outspoken critics, repeatedly clashing with him in public over several decisions. Ferguson called Dunek’s performance an “embarrassment,” in a phone call with Voice of OC last week.

One of the primary decisions the public took issue with was Dunek’s choice to fill in a skate park with sand to stop residents from violating the stay at home order, an action that became national news.

The public was also upset following controversy over fencing put up along the beach that saw eight protestors arrested and a threat by OC Sheriff Don Barnes to pull patrols out of San Clemente.

“This isn’t a Communist country where we need all of this,” Ferguson said on the call. “It’s just really bad optics and not using critical thinking.”

“Obviously there were some decisions made in the city that has the vast majority of the city upset,” James said at Tuesday’s meeting.

Ferguson also criticized Dunek’s decision to work from home through the pandemic, and said extending his contract would delay the hiring of a new, permanent city manager quickly.

“It feels like we’re paying for two city managers,” she said. “I can’t support this, I’m fine with us having our assistant city manager taking this role as he’s been doing already and save our city the money.”

Council members Kathy Ward and Chris Hamm abstained on the vote. In their comments, both made it clear they thought letting go of Dunek was a mistake.

“You’re handcuffing our city,” Ward said. “This is leaving our city flat footed, worse than not passing a budget. I’m not going to be doing a vote on this at all because it’s not worth taking a vote on.”

“We hired Interim City Manager Bob Dunek immediately preceding a pandemic,” Hamm said. “I think it’s unfair for anyone to sit and judge an individual who had roughly eight weeks to prepare and was thrown into a unique situation.”

“To hang him on sand and a fence…isn’t an appropriate decision to make.”

“I just want to take note, you guys were disgusted with the former city manager…and the current city manager,” Hamm said. “Ask whether or not the problem is sitting in the mirror in front of you.”

Later on in the meeting during a closed session, the council voted 3-1 — with Ferguson dissenting — to appoint Assistant City Manager Erik Sund to the position of interim city manager effective Thursday. Sund was already serving as the acting city manager in Dunek’s absence since the latter’s hours ran out.

Ferguson declined to state a reason for voting against Sund’s appointment.

Over a dozen public commenters asked for Dunek to be removed, stating his decisions had turned San Clemente into a “national embarrassment.”

“Please do not extend the interim city manager’s contract under any circumstances, we can do better,” one commenter said.

“We find the city manager to be the absolute worst manager of any city we have ever presided in,” read another comment. “Bob has always been a terrible leader and was absolutely the worst in Lake Forest. How he was appointed is a great mystery.”

The council has been deadlocked on a variety of issues over the last month since the departure of Mayor Dan Bane, restricting Dunek’s ability to respond to several matters, including the fencing along the beach. The council was deadlocked in a vote to remove it, and in an email to Ferguson, Dunek said that curtailed his ability to take down the fencing.

The city currently has a contract with Bob Murray & Associates to lead the search for a new city manager, but there was no date discussed for when the council would review potential candidates.