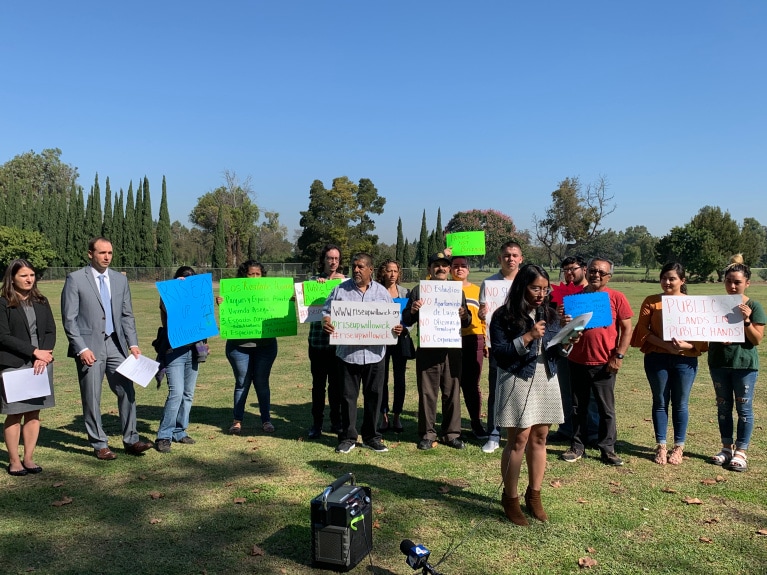 Cynthia Guerra, a community organizer at the Kennedy Commission in Orange County, speaks before a group of community members and attorneys representing the Rise Up Willowick Coalition in Santa Ana on Monday, Oct. 7, 2019. The group gathered at the Cesar Chavez Campesino Park in Santa Ana to announce a lawsuit against the cities of Garden Grove and Santa Ana over the development of the land behind them, the Willowick Golf Course. (Photo by Roxana Kopetman, Orange County Register/SCNG)

I have been thinking a lot about breathing lately, how breathing can regulate your body’s emotions, change mental patterns, call you back to the present moment and also calm the body. And how that breath was denied to George Floyd as The Guardian revealed that George Floyd called out more than twenty times he could not breathe as Derek Chauvin kneeled on his neck.

But even the most beautiful and basic human function has been systematically denied to communities of color and reserved for the privileged few.

Recently, in April 2020, Harvard University, published a national study on long-term exposure to air pollution and COVID-19 mortality in the United States. The study looked at over 3,000 counties in the US and found that the relationship between historical exposure to air pollution and the COVID-19 death rate is associated with 15% higher COVID-19 mortality rates. Communities of color are disproportionately exposed to higher levels of air pollution contributing to the disproportionate impact of COVID-19 in the Black and Latinx communities.

The study looked at PM2.5 – Particulate Matter 2.5- one of the most dangerous pollutants which can directly pass through human lungs and move into the bloodstream. The particles are formed through chemical reactions with compounds such as Nitrogen Oxides (Nox) which are released by sources like cars, trucks, power plants and factories. African Americans are 75% more likely to live in communities adjacent to sources of pollution (Futurist). Due to the long history of economic inequity and housing discrimation, low-income and minority neighborhoods are clustered around freeways, industrial sites, truck routes, ports and other air pollution hotspots.

So how do the neighborhoods around Willowick fare? Willowick is 102 acres of public land that has served as a golf-course since the 1950’s. The Rise Up Willowick coalition has been fighting for over a year to preserve the land as open space to benefit the largely working-class Latinx community in the Santa Anita neighborhood in Santa Ana and the mixed Asian/Pacific Islander, Latinx Community in the Buena Clinton neighborhood, in Garden Grove. The California Environmental Screen, which is a science-based mapping tool that helps identify California communities most affected by many sources of pollution, found that the census tracts located in zip codes 92703 (Santa Anita) and 92843 (Buena Clinton) have a high concentration of PM2.5 and a high percentage of asthma-related emergency visits. Air pollution does not increase the likelihood of contracting and dying from COVID-19, but asthma, a pre-existing condition, makes COVID-19 more dangerous. The City of Santa Ana is in the process of incorporating Environmental Justice Principles into its General Plan Update, which has to use the CA Environmental Screen as part of the requirement of SB1000.

The neighborhoods around Willowick are literally starved of fresh oxygen. The few times City officials held community outreach events concerning Willowick, their lack of imagination presents itself in retail plans, stadiums, market rate housing, exactly the opposite of what our communities need as they continue to put our neighborhoods at risk for increased pollution. The use of nature-based solutions, such as increased vegetation-cover in an urban landscape, is one of the possible solutions for reducing PM2.5 concentration. We know park designs that include a variety of land cover including increasing the number of healthy trees can help with pollution removal and carbon storage. PM2.5 concentration is high in the Willowick neighborhoods and so are asthma-related emergency visits. Now sit, think and imagine if Willowick was gone. The numbers would be even more dismal.

Orange County officials have mostly given up on fighting COVID-19. Recently, the OC Board of Education called for a return to the classroom with no masks or social distancing, the OC Health Care Agency said they would stop enforcing state mandated orders for restaurants. These officials have reconciled in their minds that those getting infected, primarily Black and Brown essential workers, students and teachers, are expendable to save the economy.

The continuous disinvestment in parks and open space in Central and North Orange County by the City of Garden Grove, the City of Santa Ana councilmembers and the OC Board of Supervisors is not accidental. It relies on council members’ complicity in this system where developers and corporations rule and residents’ voices are silenced, further reinforcing systems of environmental racism. It will take us, the activists, our neighbors and those public servants that dare to imagine beyond the bounds of the economy to create systemic change for all of us to breathe easy.

The City of Garden has not met with the RiseUp Willowick residents but you can call and email them here to demand Willowick be kept as open space.