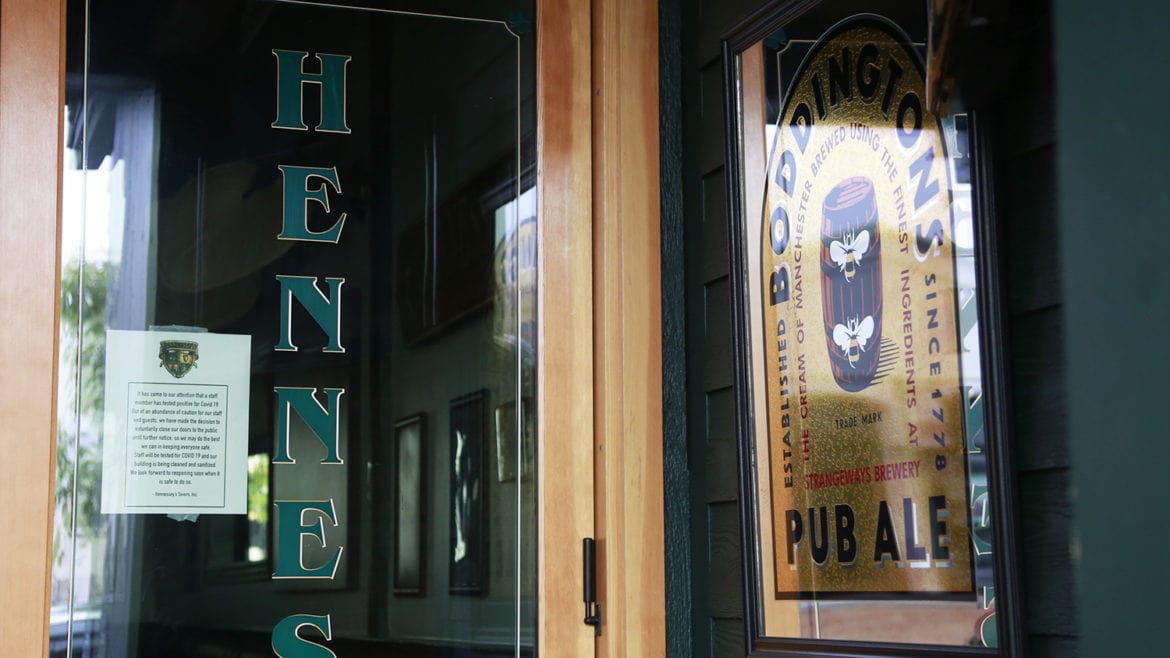 The closed patio at Hennessey's Tavern in Laguna Beach. Hennessey's recently closed its doors to the public due to a staff member testing positive for the coronavirus.

Orange County bars have been shut down by county Interim Health Officer Dr. Clayton Chau ahead of the Fourth of July weekend because of spiking coronavirus hospitalizations and positivity rates.

The order goes into effect at midnight Wednesday.

“All bars, pubs, breweries, and brewpubs establishments located in Orange County that do not offer sit-down, dine-in meals shall close until further notice by the County Health Officer,” reads the Wednesday order.

“… there remains a strong likelihood of a significant and increasing number of cases of community transmission; some individuals who contract the novel coronavirus have no symptoms or have only mild symptoms, and so are unaware that they carry the virus and are transmitting it to others,” reads Chau’s order.

The county has seen a steady rise in hospitalizations and positive cases in the past couple weeks and by June 18 it was outpacing San Bernardino, San Diego and Riverside counties in hospitalization and death rates.

“As we experience a rise in positive cases and hospitalizations, it is important that we take swift and prudent action so that we do not overload our healthcare system or jeopardize the progress we have made in reopening our economy,” said Supervisor Lisa Bartlett in a Wednesday news release.

Residents had less than a month to hit the bar scene, during which time a raging debate emerged over a mask order from former health officer Dr. Nichole Quick.

Quick resigned shortly after issuing her order over Memorial Day weekend because she received threats, including a death threat.

Chau, the director of the OC Health Care Agency, took over as interim health officer and walked the order back June 11, three days after Quick’s abrupt resignation.

At a Monday news conference, Gov. Gavin Newsom said he’s seen a disregard for health guidelines like physical distancing and masks at bars.

“We’re seeing a lot of that and that’s a point of real concern,” Newsom said. “And bars were referenced by a number of people. Nobody’s naive, look at the images … some of the bars over the weekend — how can this help with community spread?”

It’s unclear how OC officials will handle the closures, following a dispute between two members of the county Board of Supervisors and the Health Care Agency in early May.

Nomad’s Canteen in San Clemente opened at the beginning of May, with sit down dining and bar service. News reports indicate virtually no one was wearing a mask at the establishment and there was a lack of the Centers for Disease Control and Prevention-recommended six-foot physical distance between people to help curb virus spread.

Although Nomad’s was slated to be fined by the Health Care Agency for opening before approval from state health officials, Supervisors Michelle Steel and Don Wagner intervened and blocked the enforcement action.

The bar became an early flashpoint for pushback against the state’s business shutdown orders.

The virus and the statewide measures to slow the spread landed a gut punch to the economy.

Orange County saw over 250,000 jobs disappear, with a 14.5% unemployment rate as of May, according to the state employment department.

The OC Social Services Agency has also been hit hard because of the economic fallout.

Director Debra Baetz previously told Voice of OC it’s worse than the Great Recession because the pandemic’s fallout saw an instant demand for food stamps and welfare programs, instead of a gradual build up during the recession.

“The increase is more drastic with this pandemic. Everything shut down all at once and there was an upfront demand for needs,” Baetz said. “I think I see it as more of a dramatic increase in need due to the pace of the closures.”