Regional water board member Kris Murray is on track later this week to vote on a controversial desalination plant sponsored by a company and interest groups she took money from during past political campaigns.

State regulators have identified more than $6,000 in campaign contributions that Murray fundraised for her Anaheim city council campaigns in 2014 and 2015 and county supervisorial in 2018 from the project’s parent company, Poseidon Water, and two trade unions who voiced support for the project in recent years.

Environmental activists say they have identified thousands more in contributions that are connected to Poseidon’s project that state regulators should have considered as connected but didn’t.

They argue Murray should recuse herself because of the campaign cash nexus, saying they don’t believe there is any way that Murray — in her role as a regulator — could consider the project with an open mind, much less vote against it. Murray, in turn, has publicly disagreed with that notion, saying she hasn’t made up her mind.

These kinds of relationships between regulators and the special interests they regulate are legal under state law, say state campaign finance enforcement and local water officials — chiefly because the contributions are more than a year old, which is the current legal standard for a conflict. 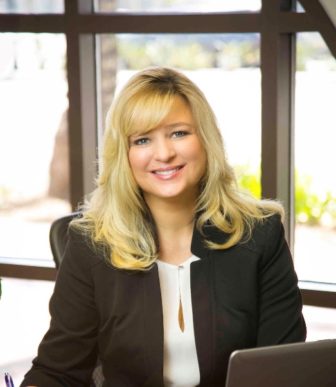 Because Murray — who sits on the Santa Ana Regional Water Quality Control Board — received the money more than 12 months before her scheduled Aug. 7 vote on the desalination project, those officials in a series of legal memos argue that a year is enough time to clear any conflicts of interest or biases.

“With respect to the upcoming decision, because no contributors have contributed to Ms. Murray within 12 months prior to the decision Ms. Murray is not required to disclose the contributions at issue, nor must she recuse herself,” said the state’s Fair Political Practices Commission (FPPC) in a July 29 memo responding to activists’ complaints, signed by the commission’s general counsel Dave Bainbridge.

Murray in previous water board meetings herself has maintained her past ties to Poseidon don’t preclude her from participating in hearings on the project, and that she doesn’t have a “predetermined position” on it.

Unconvinced, environmental watchdogs say just because Murray can legally vote on the project doesn’t mean she should — especially when her upcoming vote revolves around a potential seawater intake facility at Huntington Beach, pushed by the Poseidon Water company, that could impact the county’s coastline for decades.

“We urge Ms. Murray, at a minimum, be recused from any action or decision regarding the Poseidon – Huntington Beach ocean desalination project to avoid the appearance of any bias by the Regional Water Board in this matter,” wrote project opponent Sean Bothwell, an attorney for the California Coastkeeper Alliance, in a letter to the water board back in December last year.

They also point out that Murray has vocally supported the controversial practice of seawater desalination at water agency meetings in 2013, 2017, and 2018, before she herself was in a position have influence on the project as a regulator. 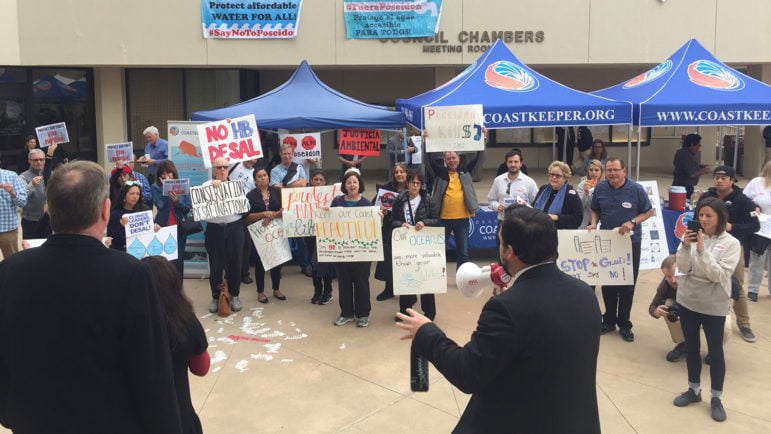 JILLIE HERROLD, for Voice of OC

Residents, experts and environmental advocates gathered at a Santa Ana Regional Water Quality Control Board meeting in 2019 to oppose a permit for the Poseidon Water desalination facility in Huntington Beach.

Proponents argue Poseidon’s $1 billion project would provide construction and operating jobs and a drought-proof source of local water. Opponents call it a boondoggle that would decimate nearby marine life sucked in with the seawater and unnecessarily hike local water rates.

Similar conflict questions have swirled officials around the Poseidon project before.

When the Santa Ana water board renewed a previous iteration of Poseidon’s wastewater discharge permit in 2012, former board member Fred Ameri — who voted to approve the renewal — was also an executive for a large civil engineering consulting firm that had made hundreds of thousands of dollars on studies for the proposed plant.

While his vote didn’t appear to unlawfully conflict with his role at the firm, activists at the time similarly called for his recusal.

Poseidon opponents’ issue with Murray surrounds money she took from Poseidon and construction unions pushing the desalination proposal during her past political campaigns for Orange County Supervisor and the Anaheim City Council.

Between 2014 and 2015, Poseidon contributed $1,650 to a committee supporting Murray’s Anaheim City Council campaign, long before her appointment to the regional water board in November 2018, according to the FPPC memo.

But before that in 2013, Murray spoke at an Orange County Water District meeting in support of a partnership with Poseidon Water on the desalination plant.

“My statement focused on the project’s potential to provide a drought-proof local water supply,” Murray said of her 2013 remarks during a February, 2019 Santa Ana water board meeting.

She publicly stated at the same February meeting she had also spoke in support of desalination at water agencies in 2017 and 2018.

Additionally, FPPC officials also acknowledged contributions to Murray’s county supervisor campaign — made after her November, 2018 appointment to the Santa Ana water board — by two trade unions that supported Poseidon’s project.

The FPPC memo notes that in 2018, UA Local 709 representative Roy Afusia during a Santa Ana water board meeting said in public comments: “there’s a need for a project like this,” and “desalination not only provides local water, but also provides thousands of jobs and millions of tax money.”

Similarly, at a March 15 water board meeting this year, Local Union 582 representative Luis Andres Perez said in public comments “as we’re getting more dense and more populated, we need to look towards other aspects of importing our water or, rather, in this case through the desalination project with Poseidon.”

Yet “because more than 12 months have passed since Murray received the contributions in question from any party or participant in the upcoming decision,” FPPC officials in the memo said no laws under the state’s Political Reform Act have been violated.

Bothwell in his letter, anticipating the 12-month argument, said “while Ms. Murray’s previous contributions from Poseidon were not received within twelve months of her tenure on the Santa Ana Regional Water Board,” Poseidon’s direct contributions to her campaign were enough to raise “an implicit bias toward the … project caused by the financial interests of her supporters.”

Regional water officials in a response to Bothwell’s letter instead concurred with the FPPC’s conclusions.

Regarding Murray’s statements in support of seawater desalination in general and Poseidon’s proposal in 2013, 2017 and 2018, water officials in their response letter wrote: “Board Member Murray’s previous statements related to the Facility were made in her official capacity as a city council member and on behalf of the City of Anaheim and, with respect to the statement made before OCWD, also on behalf of Metropolitan Water District.”

And even though Murray “did indicate that she generally supports increasing local water supplies, including desalination opportunities,” water officials in their letter said “this general attitude does not amount to a disqualifying bias.”

At last year’s Feb. 8 meeting where Murray disclosed her past supportive statements and contributions from Poseidon, she said she consulted with the agency’s legal counsel and “determined that these public statements I’ve made and the receipt of campaign contributions do not preclude me from participating in proceedings related to” the project.

“I do not have a disqualifying financial interest based on the campaign contributions I received and I am not biased for or against Poseidon, the desalination project, or the permit that will come before us,” she said, adding she didn’t at the time “have a predetermined position on the project.”

“While I do support increasing local water supplies, including desalination opportunities, I’m well aware of my role and responsibilities on this Board to ensure these types of projects meet water quality laws and policies,” she said. “I will, of course, keep an open mind during the proceedings and make my decision based on the information that’s presented.”

While FPPC officials in their letter say Murray’s vote more than 12 months after taking Poseidon and the unions’ money is legal, they stop short of commenting on whether she should’ve recused herself from previous water board meetings on the desalination subject falling within the 12-month time frame.

At the water board’s Feb. 8 meeting last year where Murray announced her past statements and contributions from Poseidon, she and the rest of the water board heard an update on Poseidon’s proposal.

On the same day, UA Local 709 — the same union the FPPC acknowledged as a supporter of the Poseidon project — contributed the $2,000 to Murray’s supervisor campaign.