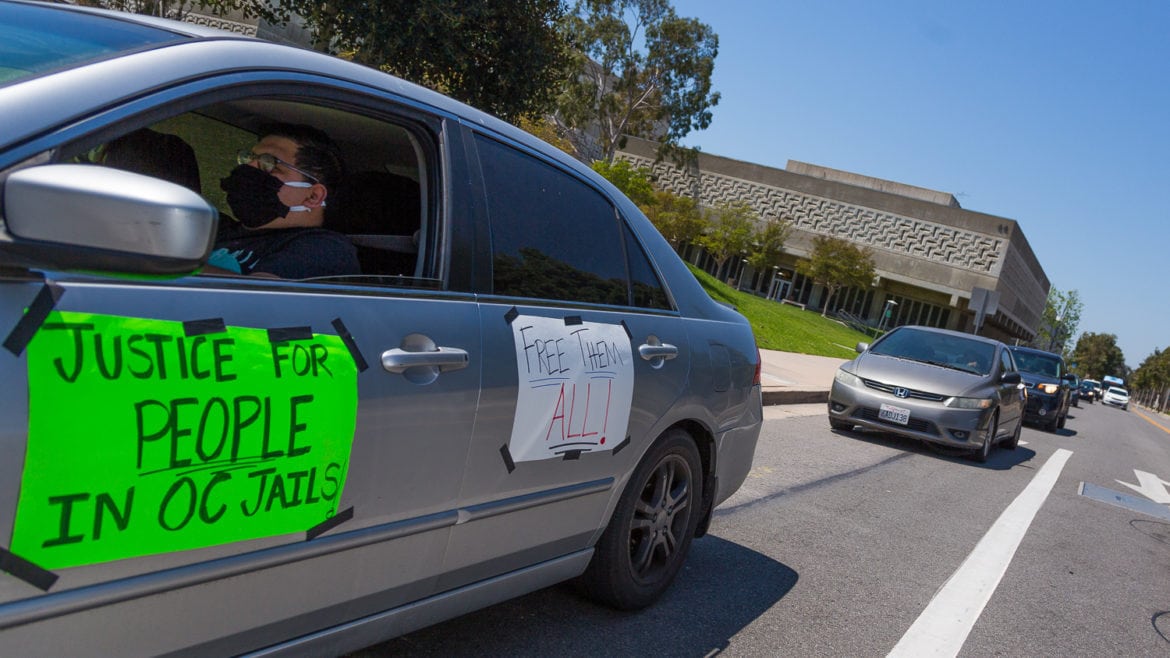 Protests in front of the OC Jail on April 14, 2020. Recent Coronavirus infections in the jails have led community members to organize and demand for inmates to be released.

The U.S. Supreme Court on Wednesday granted a request by Orange County sheriff officials to block a federal judge’s order requiring physical distancing and other pandemic safety measures at the Orange County jails, until the county’s appeal of the order is fully heard.

Wednesday’s ruling was a rare case of the U.S. Supreme Court ruling on a case out of Orange County. The nation’s highest court takes up a tiny fraction of the thousands of cases appealed to it each year from across the country.

In a 5-4 decision, the court postponed a May order by U.S. District Judge Jesus Bernal requiring Sheriff Don Barnes’ deputies and jail staff to keep inmates six feet apart and give them hand soap, hand sanitizer, access to daily showers and cleaning supplies so they can clean the areas they live in.

Bernal’s order came in response to a lawsuit by the American Civil Liberties Union (ACLU) after complaints by civil rights groups that health precautions for inmates weren’t being adequately implemented.

Sheriff officials, who run the county jail system, appealed the order, saying they proactively put safety measures in place, like releasing half the inmate population to provide more social distancing, and “largely implemented to the extent possible CDC Guidelines.”

“The sheriff is pleased with the ruling,” said Barnes’ spokeswoman, Carrie Braun, in a phone interview Wednesday.

Asked whether the department would continue implementing any of the measures Bernal sought in his order, Braun said sheriff officials would take a look at it.

“Prior to the lawsuit and the judge’s ruling, we had implemented a significant amount of measures to safeguard the inmates in our custody that have COVID and we will continue to do so,” Braun said.

“I am very pleased that the United States Supreme Court granted the Sheriff’s request for an emergency stay of the District Court’s preliminary injunction,” said Leon Page, the county’s top attorney, in a statement to Voice of OC.

“This kind of Supreme Court intervention does not happen very often, but the Sheriff has done an outstanding job reducing the transmission of COVID-19 in the jail and absolutely deserves this relief from the Supreme Court.“

In her dissent, Sotomayor said Orange County jail officials “misrepresented under oath to the District Court the measures [they are] taking to combat the virus’ spread.”

ACLU attorneys, in response to the Supreme Court’s decision, said Bernal’s ruling was reasonable and limited.

“We are disappointed with the Supreme Court’s decision to grant a stay while this case is pending on appeal. The district court had ordered reasonable, limited preventative measures to reduce the spread of COVID-19,” said Carl Takei, a senior staff attorney with the ACLU, in a statement.

“The Supreme Court’s decision to stay the court’s order comes at a time when COVID is spiking around the country, in Orange County, and in the Orange County Jail. Those in custody face enormous risk. And while Orange County officials had argued to the Supreme Court that there is no longer any threat from COVID infections from transmission within the jail, this – like other representations defendants previously made to the district court – is false.”

“As Justice Sotomayor noted in dissent, ‘Yet this court now intervenes, leaving to its own devices a jail that has misrep­resented its actions to the district court and failed to safe­guard the health of the inmates in its care.’ ”