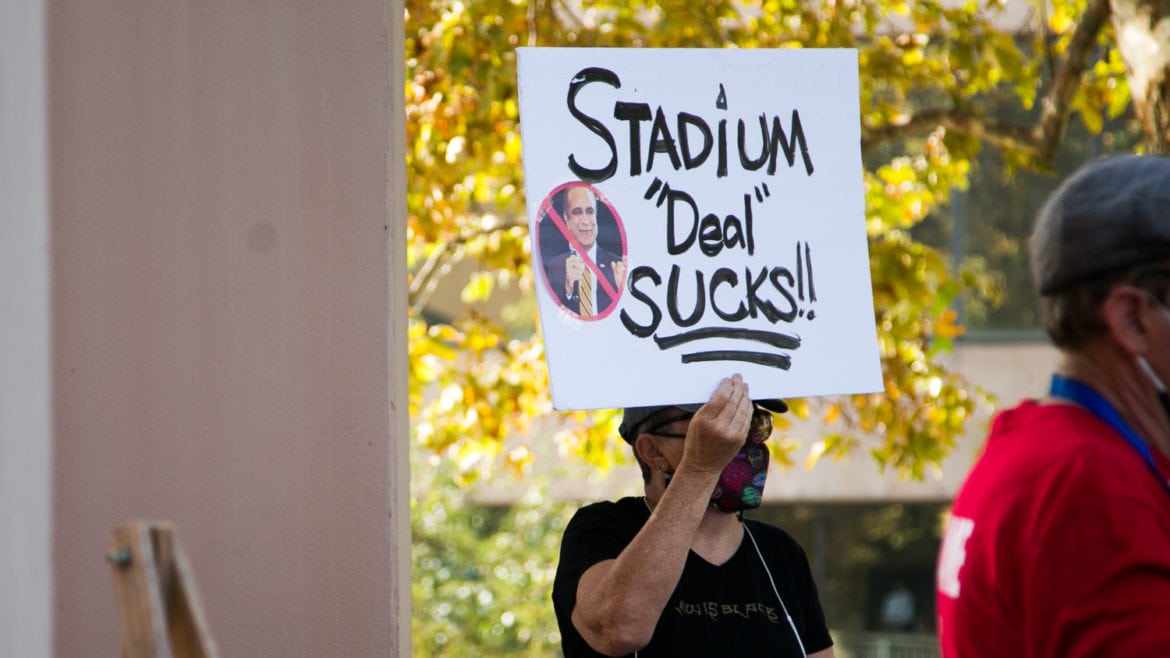 The People’s Homeless Task Force OC protest on the steps of Anaheim City Hall on Sept. 21.

When it comes to selling Angels stadium, there’s been a consistent pattern playing itself out over the last decade, with any Anaheim elected official critical of large sports team subsidies systematically scrubbed from the governing dais.

That pattern holds whether it’s the mayor or a dissenting council member.

When former Republican Mayor Tom Tait stood against an Angels’ stadium deal, his ability to put things on the agenda was limited by a council majority bent on subsidies.

Yet when a new Republican Mayor Harry Sidhu took over late 2018, the first thing he did was reinstate the stadium lease and begin silencing the council minority.

Since then, elected officials who are critical of such subsidies have since been restricted from talking about the stadium deal publicly on the city council dais.

The result has been a largely secret process.

“That’s the biggest red flag with the whole thing. If it’s great, why can’t we discuss it? If you have explanations that satisfy the issues that other people have raised about the stadium, why don’t we discuss that? Why would you create a negotiating team in secret and never have it discussed in public?” said open government attorney Kelly Aviles, who is challenging the process in court on behalf of residents.

The lawsuit is looking to overturn the land sale vote and force Anaheim City Councilmembers redo the entire process in public, which is now proposing to sell the stadium for $150 million.

First Amendment Coalition Executive Director David Snyder said while the limiting of speaking times and agenda-setting abilities isn’t a violation of state transparency law, it does go against the spirit of transparency.

“One of the fundamental tenets of representative democracy is that the people not only have a choice in their elected officials, but they are readily and meaningfully informed about the discussions of their elected leaders. To the extent that these maneuvers have stifled public conversation, that’s unfortunate from a transparency perspective,” Snyder said.

During the last round of stadium negotiations in 2013, the previous council restricted the mayor’s ability to schedule agenda items.

In the current round of negotiations, the City Council effectively silenced the minority members, who are critical of the stadium deal, by limiting their agenda-setting abilities and discussion time.

“It’s a pattern that you can only come to the conclusion that it’s intended to silence anyone opposing the stadium deals,” Aviles said.

Shortly after a $1 a year for 66 years proposal was released just Labor Day Weekend in 2013, then-Mayor Tom Tait led the charge against the deal.

Tait’s City Council colleagues almost immediately took away his ability to schedule items on agendas, unless it was done during Council comments at meetings, typically at the end.

“I’m concerned about the negotiations with the stadium lease. And while I still have that right and the public still has that right through me,” said Tait during the Sept. 30, 2013 meeting, directing staff to add a stadium negotiations update to the agenda at least once a month.

“We can listen to the public, we can have an opportunity to construct our negotiating team,” Tait said. “So put that, in a very broad sense, put that on the agenda.”

“The mayor wanted to put the Angels deal on every single meeting moving forward. There’s no more information. We have let our negotiators for the city … and go out and negotiate. That MOU you keep telling us how much we’re giving away, there’s nothing on that MOU that’s been negotiated,” Kring said.

The City Council originally wanted to require a second before someone could place an item on the agenda, but a large turnout from residents on a Friday morning pushed back against the proposal ultimately killed that idea.

“Where is the public benefit in what you are doing today? because I don’t see it. What I see is selfish self-interest,” resident Cynthia Ward told the Council at the time.

The 2013 Council majority, when it was still a five-member council, said the new agenda-setting requirement would ensure transparency because the mayor’s request would have to be made during a public meeting, instead of calling the city manager and scheduling an agenda item.

The 2013 stadium subsidy proposal ultimately fell apart after intense public criticism over the $1 a year for 66 years starting point in negotiations.

A new City Council in late 2016 restored the agenda-setting rules, following the expansion of the council from five to seven members from a district election lawsuit.

The rules would change again less than two years later.

The end result was to limit the agenda-scheduling ability of the stadium minority City Council members Denise Barnes and Jose Moreno by requiring the support of two other colleagues for any agenda request.

“If a Council member raises an issue, even if it is an idea that we may not ultimately support, Council members will give each other appropriate courtesy of advancing an idea to the agenda — I know I’ll do that,” Sidhu said at a December 2018 meeting.

“Every council member should be allowed to put forth an idea. I can see allowing a need for a second in interest in saving staff time, but needing three votes to get an idea on the agenda seems oppressive on members in the minority,” Barnes said.

“I would never just not support somebody’s agenda item because you’re in a different district, because you can do the same thing to me. So, we have to play nice and have to play fair,” Kring said.

But agenda requests from Barnes and Moreno were routinely ignored last year and this year, especially anything regarding Angel Stadium or the “community benefits” the land sale has, which turned out to be roughly $170 million to subsidize 466 units of affordable housing and a seven-acre park.

“To the extent the effect here has been to reduce public conversation about an important item of city businesses, that’s regrettable and contrary to the spirit, if not the letter, of the Brown Act,” Snyder said.

“I haven’t seen this before. Is it unusual for a place where there’s a majority to try to bend the rules to make it more favorable to themselves? Certainly, that frequently happens. To the extent where you make it virtually impossible for a minority of the board to discuss issues, I think is problematic. They’re there to represent the public and they have a duty to do so,” Aviles said.

“So they’re essentially silencing entire groups of the population.” Snyder said the maneuvering keeps the stadium discussion out of public view.

“I don’t think there’s a Brown Act violation in these maneuvers, but the purpose of the Brown Act is a way to provide the public a way to see and understand what their representatives are doing. And by way of parliamentary maneuvering these things are happening behind closed doors. That’s really unfortunate and against the spirit of the Brown Act.”

And when the two council minority members were able to schedule a stadium appraisal release, a 30-day public review period of any stadium deal and a couple rent control proposals last October, Sidhu tabled all four items.

“I therefore move to lay all four agenda items on the table,” said Sidhu, after claiming the rent control proposals have already been vetted by the Council before.

Sidhu said, “This motion is not debatable now.”

Sidhu also instituted a speaking time limit rule of two five-minute rounds for each Council member on an agenda item.

“Upon further consideration I think we are best served if we as council members can govern ourselves without adopting this proposal at this time as a hard and fast rule,” Sidhu said at the May 7, 2019 meeting.

Aviles said the rules present a problem for free speech.

“Policies are supposed to be with the public interest in mind. So the idea that it’s used in a way in order to silence critics is a real problem for free speech.”