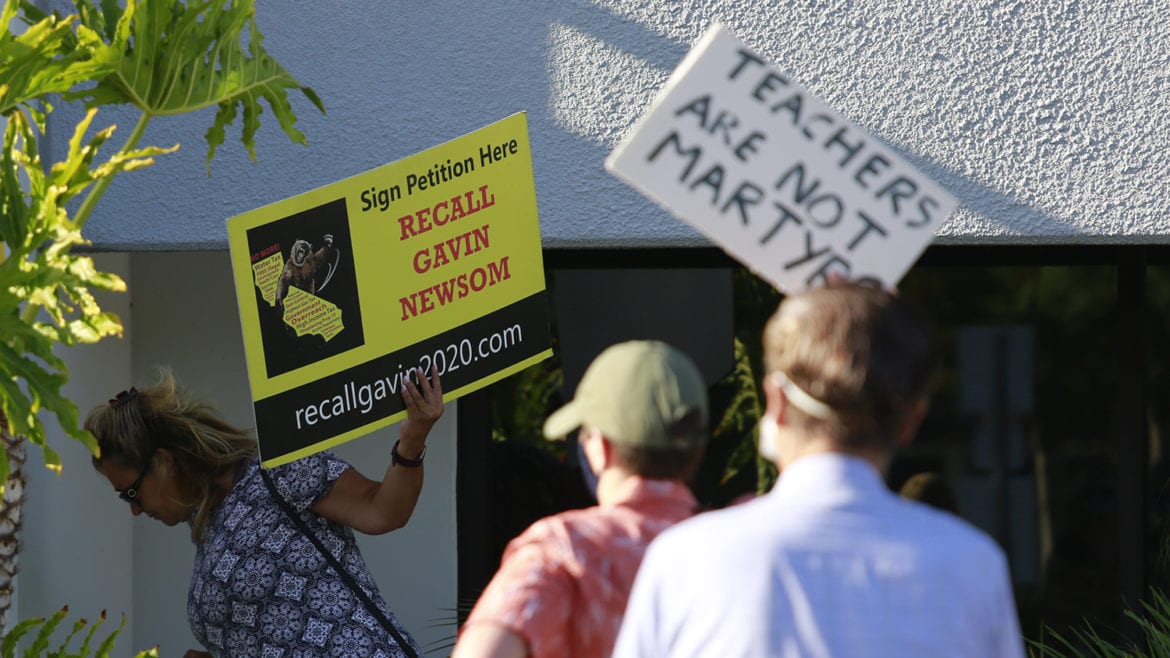 Protestors hold signs outside the Orange County Board of Education building in Costa Mesa during the board meeting on July 13, 2020.

As local school districts continue moving forward with Fall reopening plans, some teachers and community members are beginning to pushback.

More than a few teachers are talking about a potential strike or taking other actions if districts keep moving to open without assuring them there are adequate safety measures.

“The sentiment is – if it comes to it – teachers won’t show up. A strike is the very last resort. None of us really want that,” one teacher from the Placentia-Yorba Linda Unified School District told the Voice of OC.

“We don’t want to come back at least until it’s safe. Maybe in the second semester.”

But not all teachers feel that way.

“My students are suffering. They have regressed. Years of work has been undone in just a couple months and I am seeing the frustrations with online distance learning with my children who are crying just about every other day,” said Mandi, a special education teacher in the county.

“Working with special education you have to be hands on so this is a population that’s completely been neglected.”

Some educators and parents have expressed concerns to the Voice of OC about the inequities caused by distance learning and the effects long term virtual education has had on students’ mental health.

There are a host of school board meetings occurring this week. Capistrano Unified School District is meeting tonight at 7 p.m. and Saddleback Valley will meet tomorrow Sept. 24 at 4:30 p.m. There is no discussion on delaying the reopening of schools on their agendas.

The Newport-Mesa Unified School District and the Newport-Mesa Federation of Teachers are currently in negotiations over school reopenings and will meet tomorrow to continue negotiating. They have yet to reach a memorandum of understanding.

“We also are having a (Union) meeting on Friday to actually discuss some of the issues after things are determined on Thursday what the next goals are and if we need to take immediate action,” said Tamara Fairbanks, the president of the Newport-Mesa Federation of Teachers.

Fairbanks said she did not want to speculate over the likelihood of a strike if negotiations are not successful.

“Anything can happen in the next 24 hours especially in this news cycle,” she said.

One Mission Viejo High School teacher who helped write the Saddleback Valley letter calling for a delay in a return to schools said teachers are hoping the district will consider a postponement of reopening classrooms at a special meeting scheduled for Sept. 24.

Mark Perez, the district’s director of communications, sent out an email to the district community about the meeting.

“This meeting was previously scheduled and does not involve any items or discussion about the Hybrid reopening plan.  SVUSD’s in-person reopening date remains on September 29.  As with any Special Board Meeting, only items that are on the agenda will be eligible for public comments,” Perez wrote to the community.

The Mission Viejo teacher said that many teachers feel left out of the conversation on reopening schools.

“Our concerns haven’t been addressed and anytime they have addressed them it’s a very blanket boilerplate type of response rather than take our concerns more seriously and I think that’s the frustration. They don’t see our concerns as important,” the teacher said.

Some teachers in the Capistrano Unified School District have also expressed concern with returning to schools.

“If we bring (kids) back and then we do see a spike and the numbers increase, and we have to suspend the hybrid model it’s a complete setback. The kids will have to return to a distance learning module, and we will basically have forfeited, a week, two weeks, three weeks and that’s just something that’s not constructive going forward,” said Dan Bornfeld, a teacher who’s been at the district for 30 years.

The District, which oversees roughly 47,000 students in schools across South County, nixed a plan to delay reopening high schools until January 2021 that is no longer going to be up for discussion at its upcoming school board meeting today.

Jim Reardon, Capistrano Unified School District’s Board of Trustees President, said the addendum to delay reopening high schools was placed on the agenda till next semester by the board. The plan – which had been advocated by principals and staff – would have allowed campus activities like athletics as well as counseling to start up this semester while students did classes online.

He said following careful examination of the plan the board reversed course.

Bornfeld said he and his colleagues feel a lack of respect from the district administrators for not being responsive to teacher concerns. The fear of getting the virus and potentially infecting a loved one has him reconsidering staying on as a teacher.

“It’s the last thing that I want to do. I want to be in the classroom. I love what I do. I have a real passion for working with young people and I just feel as though that we’re being looked at as though we are expendable. We’re guinea pigs,” Bornfeld said.

“I hear teachers say we weren’t consulted, but that’s because they weren’t paying attention. I have very little sympathy for people who cry out at the last minute and that’s what’s going on here. They’re suddenly realizing that they’re actually going to have to go back to work after enjoying a very nice time being paid while at home since March,” Reardon said.