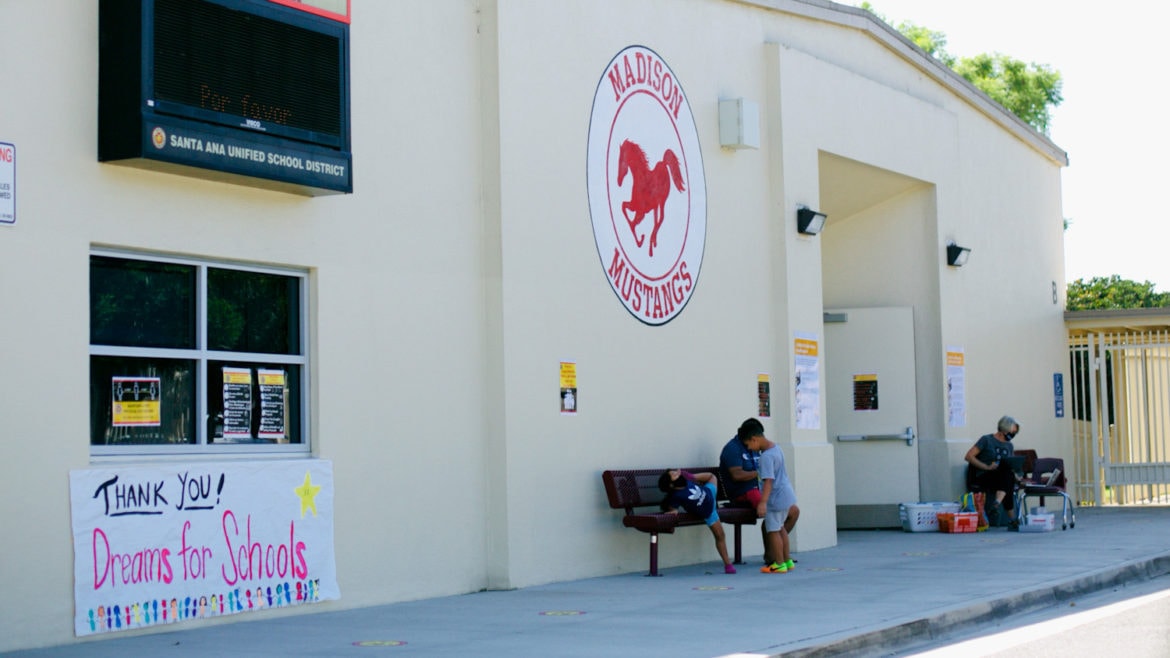 Madison Elementary School in Santa Ana, which isn't expected to open its classrooms anytime soon, along with the rest of Santa Ana schools. Sept. 25, 2020.

Public health experts are concerned about how the coronavirus can spread in Orange County schools as many classrooms around the county are beginning to reopen to mixed reactions from parents and teachers.

Dr. Dan Cooper, a top professor of pediatrics at UC Irvine, said while OC’s case rates are improving, it doesn’t mean all schools should automatically reopen — especially in areas where the case rates are high.

He’s also concerned about the lack of a data collection center that could gather information on everything from outbreaks and contact tracing to specifics on how the virus is spreading in schools and who’s catching it.

“The problem is there really should be a systematic data collection effort,” Cooper said in a Thursday phone interview.

“So the state of Texas, for example, and other states are systematically testing kids out there. We’re not doing that systematically. It’s kind of sporadic,” he said.

The concerns come as OC has moved into Tier Two on the state’s virus monitoring system, which regulates which businesses can open. Restaurants, movie theaters, malls, gyms, churches and other retailers are allowed to resume indoor operations with limits on how many people can be inside.

The classroom reopenings come after county health officials said they will largely take a hands-off approach to coronavirus guideline enforcement and refuse to list outbreaks, instead leaving those decisions up to local school districts.

Cooper said he and other UCI researchers are slated to conduct a study at four different schools in Orange County to monitor how the virus spreads in classrooms.

UCI epidemiologist Daniel Parker also said the county is in a better position to open classrooms than it was during the case spikes a few months ago.

“Back in late June, early July I was really nervous. Things are much better now. We can’t keep the kids out of school altogether,” Parker said in a Thursday phone interview.

Yet he worries about how the classrooms will look.

“I worry about having lots of people crowded indoors in small spaces — the epidemiologist in me squirms about that,” Parker said.

“I’m a pessimist about this sort of thing. So my hunch there will be outbreaks … and always with the possibility that you will have to shut the school down if it gets out of hand.”

“My biggest fear is not a bunch of sick kids. My biggest fear is that schools play a role as kind of an engine of spreading COVID in the community. We see this in the flu,” Noymer said in a Thursday phone interview.

“Because kids, by and large, don’t get sick — by which they have symptoms. So I think there needs to be intense surveillance of teachers as the canary in the coal mine. Because teachers are adults … so if kids are spreading it, we expect to see some teachers get sick,” Noymer said.

Many residents are eager to get students back in the classroom.

“We are putting our children, teachers and community mender members through educational hell for a virus so deadly that you have to be tested to find out if you have it,” a wife of a teacher said at the District’s board meeting. “The fear instilled in our immediate community and even our world right now is omnipresent.”

Some teachers and parents have expressed concerns to the Voice of OC about the inequities caused by distance learning and the effects long term virtual education has had on students’ mental health.

There are also students struggling with their mental health and are anxious about having to go back to school amid a global pandemic.

Yesterday, the Placentia-Yorba Linda Unified District announced this week to their students and staff that they will delay reopening elementary schools until Oct. 21, middle schools until Oct. 26, and Nov. 9 for their high school students. Tentative dates were set for the earlier part of October initially.

Almost 10,000 parents and employees responded to a district survey this week on hybrid and virtual learning. Around 52% of parents in the district and 63% of employees favored continuing learning from home, according to the district.

In comparison, Capistrano Unified School District, which oversees roughly 47,000 students, is slated to open its high school classrooms Oct. 13, despite objections from parents about the reduced instructional time for students who choose the hybrid option.

Since the pandemic began in March, the virus has killed 1,204 county residents out of 52,904 confirmed cases, including 22 new deaths reported Friday, according to the county Health Care Agency.

The newly reported deaths could stretch back over the past two weeks.

Hospitalizations are holding steady with 157 people in hospitals, including 50 in intensive care units.

Over 828,000 tests have been conducted throughout the county, which is home to roughly 3.2 million residents.

Ladera Ranch resident Tiffany Vu-Conant said while she wants her son back in the classroom, she doesn’t want to sacrifice any instructional time.

“Lots of people, including myself were led to believe that you’re going to have 50 percent in person and when your child is not in-person, you’ll have virtual,” Vu-Conant said in a Thursday phone interview.

“That is not what is happening. what ‘s happening is they’ll do half in person and the other two days, they would be at home with no teacher instruction time at all.”

Most families have opted for hybrid learning, according to the district.

“As of today, about 82% of families have chosen the hybrid. Families can switch to 100% online at any time, so these numbers may change over time,” said Ryan Burris, the district’s spokesman in an email to the Voice of OC.

Vital, along with district president Jim Reardon, pulled the item off the school board’s Tuesday agenda.

“It was our school principals pushing to maintain online now so that we would not lose 540 minutes of instruction a week,” Vu-Conant said.

“The kids are caught in between the politicking of all these three entities. The union, the board and the district are trying to maneuver and get the things that they want at the expense of our children’s education,” she said.