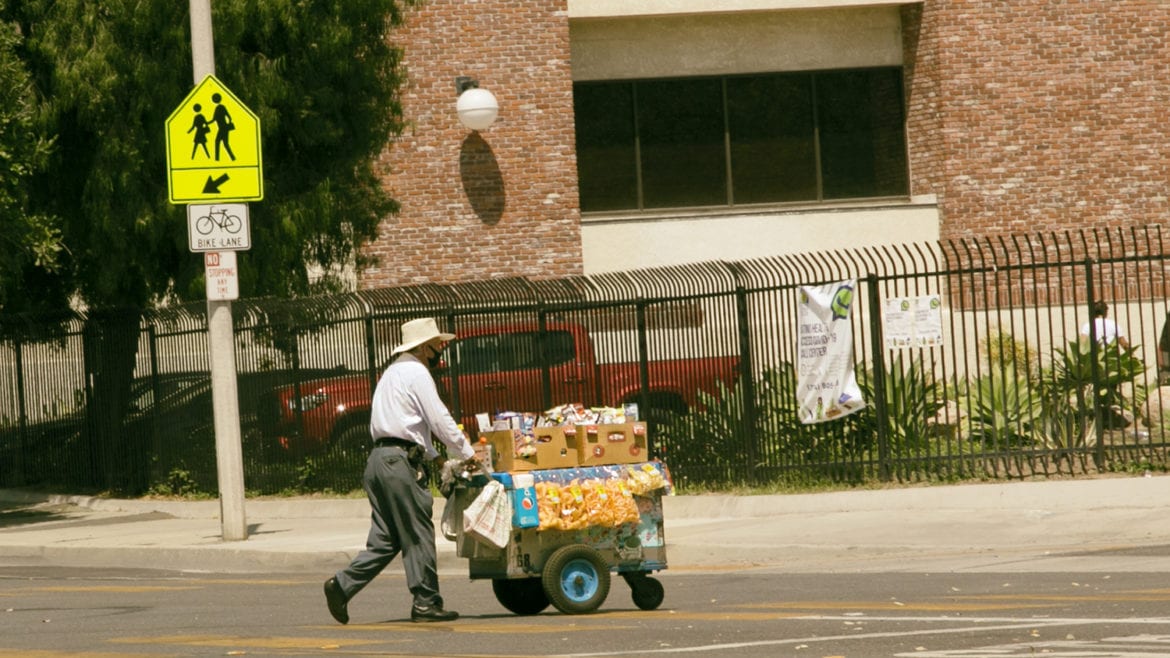 A masked-up paletero — ice cream vendor— walks through the streets of Santa Ana on Sep. 3, 2020.

A day to reflect on the role of workers in our economy couldn’t be more appropriate this year.

These days, many Orange County residents are exposing themselves to the coronavirus everyday at work because they don’t have the option to work from home, while others are battling unemployment and struggling to put food on the table.

“You name it — they’re keeping us alive. They’re keeping us healthy. But we need to help also. We need to take responsibility. That has been our message. If we are honoring you as a hero, then do the right thing and keep everybody safe and wear a mask, follow guidelines,” said Orange County Labor Federation Executive Director Gloria Alvarado.

While many of those residents continued to work now called essential employees by public health officials and heroes by union leaders — many also lost their jobs.

The economy took an immediate hit when the state health officer ordered sweeping business closures during March and April in an effort to slow the spread of the virus so hospitals and medical staff didn’t get overloaded with virus cases.

That’s two points higher than the national unemployment rate, which sits at 10.2 percent.

And it hit all at once.

For those expecting financial help from the state government, it’s been a long wait.

Numerous residents have emailed and called Voice of OC over the past six months and said they’ve had to wait weeks before hearing back from the state employment department about their unemployment checks.

While state officials and lawmakers have said they’re looking into the issue, the Demorcratic majority also resisted calls for an audit by some state Senate Republicans.

Alvarado said the OC Labor Federation, which represents 250,000 people through an umbrella of various unions, immediately switched gears when the economic fallout hit.

“When everything shut down basically, we immediately activated our emergency program. So we never closed,” Alvarado said. “We were working around the clock, 7 days a week, providing assistance with unemployment applications to all members. We activated our partnership with the food bank.”

The federation also helped many of its newly unemployed members get new jobs.

“Even though hotel workers, bars, restaurant employees, all of them were being laid off — the supermarkets needed additional help. So we became a hub and also helped members rebuild their resume,” Alvarado said. “And made sure we were able to connect them with available jobs.”

“If you look at Sweden, who didn’t shut down the economy, their GDP dropped like Norway, who did shut down their economy,” Schwarz said.

“There’s evidence that people stopped going to restaurants and stores even before governments imposed lockdowns. So the recession is not just because of government intervention,” Glazer previously said.

Schwarz said the situation reminds many people of the Great Recession, but the circumstances of the current recession are different because this one wasn’t caused by subprime mortgages, which threw a wrench in the housing market’s engine.

“This recession if you look at what sectors are affected, it’s really the same things as normal recessions,” Schwarz said. “If you look at the things that have struggled the most, it’s the consumer discretionary stuff — travel, restaurants, jewelry — kind of all of those things you don’t need to buy.”

Labor unions and various residents had to fight for a statewide mask mandate after county health officer Dr. Clayton Chau walked back the countywide mandate early June, shortly after the former health officer resigned because of threats she received over the mask order.

The unions and the OC Labor Federation tried holding a news conference in mid-June to call on county leaders to reinstate the mask mandate, but an anti-mask group showed up and shot down their efforts.

The news conference essentially turned into a yelling match when the anti-mask group berated unionized employees who tried to speak to the press corps.

“We tried completing most of it, unfortunately folks were trying to shut us down. They were asking to be heard, is what they were saying. Evidently they didn’t want us to be heard. They were shoving and pushing us. They seemed like they were more interested in silencing us then having an actual discussion,” said federation project leader Luis Aleman.

In mid-July, when hospitalizations and cases were spiking, state public health officials closed down businesses like movie theaters, theme parks, indoor dining at restaurants, bars, nightclubs and a host of other entertainment sectors.

Disneyland pushed to reopen its gates in July, but Gov. Gavin Newsom halted the process after a host of theme park employees and various unions raised concerns about masks, testing and the overall safety of operating a theme park as the virus raged through that part of Anaheim.

At a news conference last Wednesday, Newsom said he’s been discussing potentially reopening theme parks soon, but he didn’t say when that might happen.

“The reason we set it aside … is we still have work to do. All I can leave you with is that progress is being made. We are still working on some details,” Newsom said.

The virus has hit the working class neighborhoods of Anaheim and Santa Ana hardest over recent months.

The two cities, while making up about 20 percent of OC’s population, have about 36 percent of cases. That share was even higher during the virus spike in July at just over 40 percent.

Nearly half of OC’s virus deaths — 46 percent — happened in the two cities.

Public health experts have previously told Voice of OC that the rapid spread in the two cities is because of overcrowded housing, lack of access to health care and many of the residents don’t have the option to work from home.

The economic fall out has also strained the county’s Social Service Agency, which administers a host of welfare programs for residents – and is facing potential budget cuts as sales tax revenue for local county coffers plummets.

Food stamps have become one of the biggest needs from residents, agency Director Debra Baetz previously told Voice of OC.

She said the fierce food stamp demand came suddenly, unlike the gradual buildup during the Great Recession.

“The increase is more drastic with this pandemic. Everything shut down all at once and there was an upfront demand for needs,” Baetz said. “I think I see it as more of a dramatic increase in need due to the pace of the closures.”

In the spring, the Honda Center hosted a drive-through food drive that saw so many residents show up, Anaheim police officers had to conduct traffic control on Katella Avenue to clear up congestion.

Although a lag in test reporting is keeping case rates artificially low for OC, the county could move into Tier Two on Tuesday, which would allow restaurants to reopen indoor dining. It would also allow movie theaters, churches, gyms, museums to resume their indoor operations.

Alvarado said the unions and other labor groups haven’t been part of that discussion and questioned if county officials have been creating a plan to avoid the spike in cases that happened from the Memorial Day reopenings.

“Is there a plan and if so, where is it? And is it being communicated to the community so the community is following it? Those are questions to remain before we reopen,” Alvarado said. “We still have a bad taste in our mouth when it comes to the county from Memorial Day.”