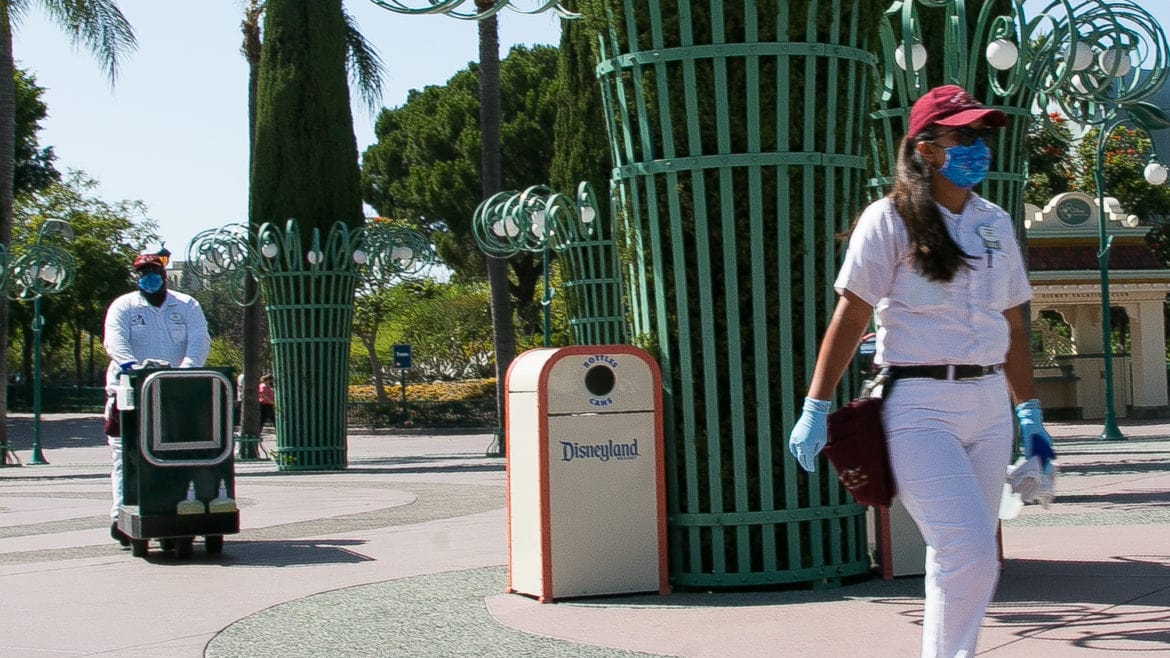 Anaheim’s Disneyland resort area workers are clamoring for Gov. Gavin Newsom to sign a bill that would make hotels, convention centers and other hospitality employers rehire workers who’ve been laid off because of coronavirus shutdowns once things turn around.

With Disney announcing 28,000 layoffs in its U.S. theme parks, including Disneyland, UNITE HERE Local 11 members are driving to Sacramento today to demand Newsom to sign the bill that would prevent them from being replaced by younger, cheaper employees.

“All of us are hoping he signs that because a lot of us have a lot of years with the company,” said Inez Guzman, a Disneyland Hotel employee and member of UNITE HERE.

Guzman and her colleagues have been facing months of uncertainty since they were furloughed in March, when the pandemic first kicked off.

Today is the last day Newsom can sign the bill or veto it.

“They’re really nervous and scared and they’re asking me what’s going to happen and I don’t have any answers for them. All I can tell them is that I hope the governor signs the bill,” Guzman said in a Wednesday phone interview.

UNITE HERE Local 11 President Ada Briceño said their roughly 3,000 Disney members are going to be hit hard by the layoffs.

“Approximately 950 of our 3000 members will be laid off effective Nov. 1,” Briceño said in a Wednesday phone interview.

“This issue has highlighted the urgency of the governor signing AB 3216. We need it to be a law in California that guarantees recall and retention of hospitality workers. Today is the deadline, we need him to sign [the bill] today,” Briceño said.

The California Chamber of Commerce is against the bill and has criticized it for being a “job killer” and being too burdensome.

“The industries to which this bill would apply are some of the hardest hit as a result of COVID. Event centers have yet to reopen, hotels are operating at limited occupancy, and airports throughout the state remain deserted. Imposing additional mandates on these struggling industries is not only punitive, it will confound their ability to get back on their feet,” said chamber executive Vice President Jennifer Barrera in a statement on their website.

Briceño said the federal relief money, known as the CARES Act, propped up the businesses and it should’ve kept checks flowing to employees.

“The CARES Act created so much help for the industries and it was an incentive to keep workers. Well that didn’t necessarily happen. We’re not even putting money on it, we’re just saying bring your employees back. It’s not a burden, they shouldn’t think of their employees as a burden,” Briceño said.

She said the unions are drawing on their past experiences — from 9/11 to the Great Recession — when scores of hospitality employees were laid off and replaced by cheaper workers.

“So we already know the response of the industry and we’re trying to get ahead of that to make sure when it comes kind of normal for the rest of Californians, at least workers can expect to go back to some kind of normality at some point,” Briceño said.

Newsom has yet to release theme park reopening guidelines.

Local officials including the mayors of Anaheim, Buena Park and Garden Grove have called on him to reopen Disneyland and Knott’s Berry Farm.

“I just hope that Disney opens the park in a safe manner and that the Governor does sign the [bill] so we have that protection if we do have to be laid off, they will call us back to work,” Inez said.

City coffers around Orange County have taken huge economic hits, especially in cities where a large chunk of revenue is generated by tourism, like Anaheim.

Dr. Mark Ghaly, secretary of the state Department of Health and Human Services, said state public health officials are noticing an uptick in cases after months of decreasing trends.

“Today we had a slight increase in the total number of hospitalizations of the state and that is part of the concern of these slightly up numbers of cases,” Ghaly said at a Tuesday news conference.

On Tuesday, Orange County saw its highest number of deaths reported on a single day at 33 people killed from the virus.

The deaths can stretch back up to two weeks.

Aug. 6 was the last time deaths reached that level, with 32 deaths reported that day.

Since the pandemic began in March, the virus has killed 1,268 county residents out of 53,751 confirmed cases, including 19 new deaths reported today.

Hospitalizations saw a slight increase also, with 172 people in hospital beds, including 48 in intensive care units.

That’s still far lower than the July hospitalization spikes, when over 700 people were hospitalized and warnings of doctor and nurse fatigue were coming from the medical community.

Nearly 865,000 tests have been conducted throughout OC, which is home to roughly 3.2 million people. Some people, like medical professionals and other front line workers, are tested multiple times.

Meanwhile, Ghaly said convention center guidelines aren’t ready to be released yet, either.

That means a bigger economic blow to Anaheim, which has Disneyland and a convention hall. The city normally makes money through a combination of hotel and sales taxes stemming from the tourism those venues bring to Anaheim.

The bump prevented OC from moving into the third tier, also known as the orange tier, on the state’s coronavirus tier listing.

This means the county won’t be able to reopen bars for outdoor operations and allow more people into restaurants, churches, gyms, movie theaters and malls as the county remains in the red tier, or Tier Two. Bowling alleys also remain closed.

Here’s the latest on the virus numbers across Orange County from county Health Care Agency data: