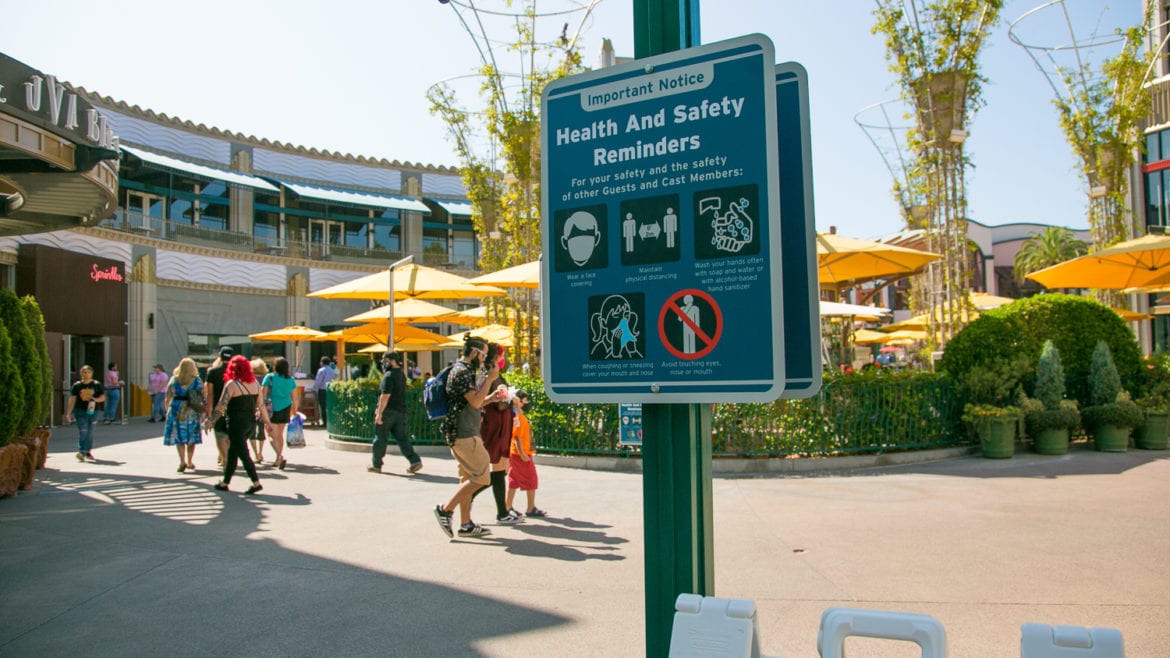 People shop and eat at Downtown Disney while Disneyland remains closed, despite a local push to reopen the theme park. Sept. 25, 2020.

A host of businesses and churches across Orange County won’t be able to let more people indoors this week because local coronavirus infections went up after county officials lifted restrictions just after the Labor Day weekend, something that Health Care Agency officials on Tuesday said fueled a case bump.

There were some signs Orange County this week could’ve potentially moved into a new state tier – Orange – but officials acknowledge a couple days of high numbers of positive virus tests threw a wrench in that move.

“We know that today when the state released the new calculation, we’ll most likely remain in the red tier (Tier Two). Because we had a few days of increased numbers … we believe that is the effect of the Labor Day weekend,” OC health officer Dr. Clayton Chau told county supervisors at Tuesday’s regularly scheduled public meeting.

But Chau didn’t say what exactly caused the bump and supervisors didn’t ask about it.

This means the county won’t be able to reopen bars for outdoor operations and allow more people into restaurants, churches, gyms, movie theaters and malls as the county remains in the red tier, or Tier Two. Bowling alleys also remain closed.

OC will now need to keep its numbers lower to get to the third tier, Orange, meaning a case rate of less than an average of four new cases per 100,000 residents a day and less than a five percent positivity rate.

As of Tuesday, the county meets the testing positivity requirements for the third tier, but sits at a 4.4 daily average case rate, keeping it in the second tier, according to the state’s tier listing.

“Today we had a slight increase in the total number of hospitalizations of the state and that is part of the concern of these slightly up numbers of cases,” said Dr. Mark Ghaly, secretary of the state Health and Human Services Agency, in a Tuesday news conference.

Since March, the virus has killed 1,249 county residents out of 53,557 confirmed cases, including 33 new deaths reported Tuesday, according to the county Health Care Agency.

The virus deaths can stretch back up to the past two weeks.

As of Monday, 162 people were hospitalized, including 46 in intensive care units.

Nearly 858,000 tests have been conducted throughout OC, which is home to roughly 3.2 million people. Some people, like medical professionals and other frontline workers, are tested numerous times.

The increasing virus transmission comes after OC, along with the state, saw weeks of decreasing case counts and hospitalizations.

It also comes as there’s a local push to reopen Disneyland and other theme parks.

Her letter was signed by a host of state legislators representing OC.

“Many indoor facilities are already operating safely at reduced capacities, with face covering and physical distancing requirements,” Quirk-Silva wrote. “Logic would suggest that since theme parks are controlled venues operating predominantly outdoors, that they too could reopen with similar health and safety protocols.”

“We’re working hard to get that out in a responsible way as soon as possible. So planning can be done by the counties that are home to the theme parks as well as the operators of those theme parks,” Ghaly said in response to a Wall Street Journal question.

“We’re working with those industries to put up something that is thoughtful.”

His statement echoes what Gov. Gavin Newsom has said for the past two months on theme parks. He’s hinted at releasing guidelines repeatedly, but hasn’t given a solid time frame.

Tax coffers in cities like Anaheim and Buena Park are taking a tough financial hit because Disneyland and Knott’s Berry Farm have been shuttered for more than six months — the longest any of those two theme parks has ever closed.

The result is less hotel and sales taxes, which trickles into surrounding cities like Garden Grove because they have hotels along Harbor Boulevard.

Ghaly said convention center guidelines aren’t ready to be released either, despite news reports that the Los Angeles Comic Convention will open its doors December.

“I saw the same news clip and I will tell you that guidance for convention centers will also be out soon. They are not in our tiering system yet,” Ghaly said, responding to Voice of OC’s question.

He also disputed claims of convention organizers that the comic convention has been given a green light by state public health officials.

“No, as far as I know. And I certainly haven’t myself had any communication with the planners for that convention and as far as I know none of our team has. And it would be inconsistent and premature to look at a county like Los Angeles that remains in purple (Tier One) to think that far out,” Ghaly said.

Shortly after the pandemic kicked off in March, Anaheim Mayor Harry Sidhu spearheaded a $6.5 million bailout effort for Visit Anaheim — the advertising bureau of the resort and convention center district.

Visit Anaheim, normally funded by resort hotels through a self-assed hotel tax, claimed it had rebooked conventions this year and was able to book new ones last year.

Anaheim originally funded the bailout through its convention center reserves, but later dipped into the $33 million in federal coronavirus relief money that’s supposed to be spent for things tied directly to the virus.

Former City Manager Chris Zapata said the city shouldn’t give the full $6.5 million and institute a strict checklist on how to track that money at the March meeting, when Sidhu brought the contract to the council.

Despite calls from some Anaheim City Council members, there hasn’t been a public accounting of Visit Anaheim’s $6.5 million bailout.

Meanwhile, Ghaly said it will likely be a while before people see convention halls reopened.

“People had hoped transmission rates would come down low enough so activities could be permitted that aren’t today, but we have a lot of time and data yet to see before we can really say something like a large convention will be allowed.”

Here’s the latest on the virus numbers across Orange County from county Health Care Agency data:


Spencer Custodio is a Voice of OC staff reporter. You can reach him at [email protected]. Follow him on Twitter @SpencerCustodio.
What is COVID-19? Do I have it?