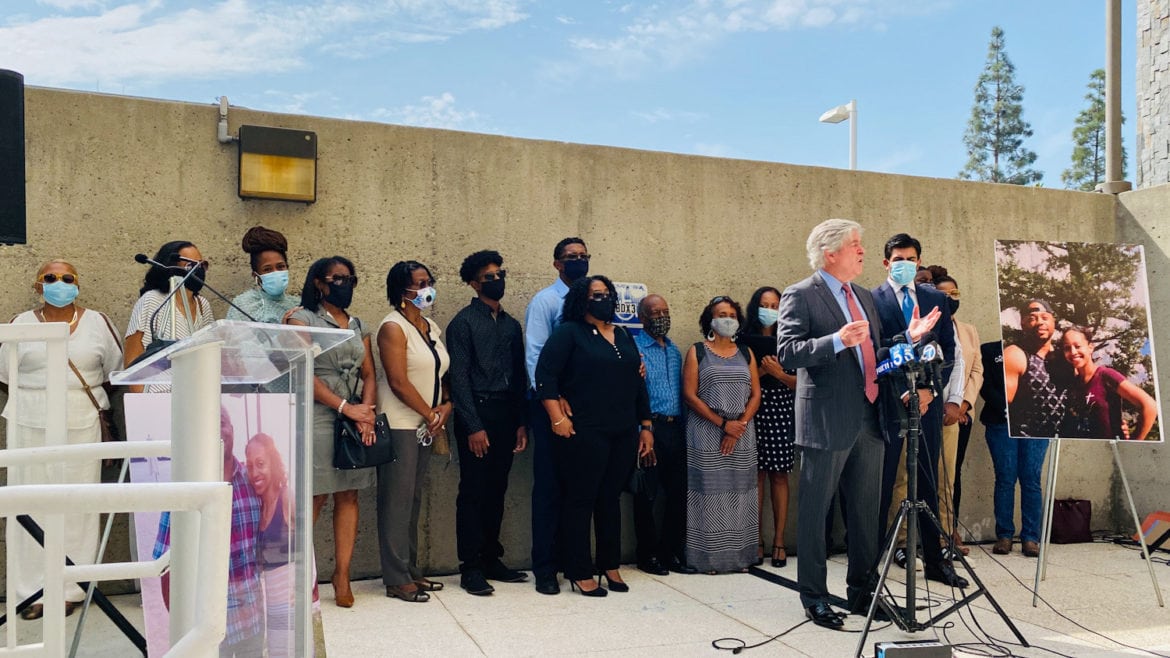 Members of Reinhold's family, alongside their attorneys, announced they filed a wrongful death claim - which they expect to turn into a lawsuit - on Oct. 6, 2020.

The family of Kurt Reinhold, a homeless Black man shot and killed last month by an Orange County Sheriff’s deputy tasked with assisting him, has filed a wrongful death claim against the county — the first step toward a lawsuit.

The family’s public calls for more transparency and information add one more layer of controversy over the Sept. 23 incident, where two homeless outreach Sheriff’s Deputies approached Reinhold outside the Hotel Miramar in San Clemente, got into a physical struggle with him, and killed him.

The shooting was protested by local civil rights activists in the days following Reinhold’s death and has since put in motion an Orange County District Attorney’s office investigation and an internal Sheriff’s Dept. probe.

The claim filed Tuesday morning asserts the shooting — which Sheriff officials insist happened after Reinhold reached for one deputy’s gun — went against the deputies’ own de-escalation training and wasn’t justified because Reinhold, who was jaywalking, posed no threat or danger to either of the deputies.

The attorneys also reject the department’s argument that Reinhold was reaching for a deputy’s gun during the struggle and in the claim argue the use of deadly force “was excessive and unreasonable.”

Orange County Sheriff Don Barnes in a Tuesday written statement offered “our condolences to the family of Mr. Reinhold for their loss. Every time law enforcement contact escalates to the use of deadly force, it is tragic for the family, the deputies and the community.”

Yet Barnes said it’s “vitally important that we reserve judgement until a full and complete investigation has been completed by the Orange County District Attorney’s Office.”

Reinhold’s wife, Latoya, on Tuesday told reporters she still has a host of questions for Barnes.

“I keep asking myself, ‘Why?’ What did Kurt do to deserve to be shot in broad daylight for jaywalking? None of this makes any sense. It’s a nightmare I’m living with each and every day,” she said, standing alongside her other family members.

Asked why Reinhold was homeless despite some family living as close as Los Angeles County, Taylor said mental health issues prompted Reinhold to “leave for some time” — “he would come back and stay with his mother, he would check in with his wife.”

“He had health insurance — he chose to live how he lived, and what we don’t understand, the family doesn’t understand, is what would have caused the deputies to interact with him to begin with,” Taylor added. 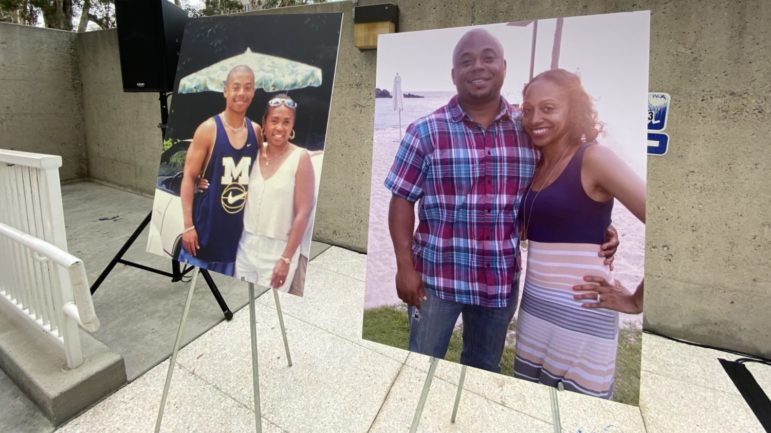 Reinhold was 42 years old when he died.

The family in the claim is seeking monetary relief for damages they say are tied to the incident, like wrongful death damages, and attorney fees.

It’s the first step toward a possible lawsuit. The county has 45 days from Tuesday to respond to it.

Taylor and another attorney involved in filing the family’s claim, Neil Gehlawat, maintain the deputies themselves escalated the situation — one of which they say had his taser out before the encounter turned physical.

“These officers are supposedly trained to deal with people who are homeless and experiencing some sort of emotional problem — how did we get to Kurt ending up on the ground, being jumped by the two officers and ending up being killed?” Taylor said to reporters.

The family’s legal action comes as multiple probes into the incident are taking place in tandem — one by the Orange County District Attorney’s office, which investigates shootings and use of lethal force incidents by county law enforcement, and the other by the Sheriff’s Dept. itself, which is conducting an internal administrative probe.

Another investigation is planned by the Office of Independent Review, which responds to the county board of supervisors, and will commence once District Attorney Todd Spitzer’s office decides whether or not to file criminal charges against the deputies.

Gehlawat also raised questions on Tuesday over the unknowns that remain around the incident, calling on Barnes “in the coming days” to release Reinhold’s full autopsy report, the department’s incident report, and the personnel files of the deputies involved to see if they’ve had prior incidents like the one on Sept. 23.

While the Sheriff’s Dept. does perform a dual coroner role, DA Spitzer in a Wednesday email said his office has an independent medical examiner to conduct the autopsy and that “the personnel in my office assigned to the investigation have never worked for the Sheriff’s Department.  That is another decision to maintain objectivity and to avoid bias.”

He added that he’s contacted the family with an offer to meet with them and that he’s “preserving independent specimens for them in case they want to conduct their own tests.”

“And we want all the footage,” Gehlawat said during the Tuesday news conference. “And all tradio traffic so we can determine if there was even really a reason for them to contact Mr. Reinhold in the first place — in other words did they receive a call that he was doing something? Because the Sheriff has been pretty mum on that one.”

“What led to the initial contact with the deputies is part of the ongoing investigation,” Barnes said in his Tuesday statement.

The statement adds: “During the physical altercation, Mr. Reinhold grabbed one of the deputy’s guns. This information is shared as a factual circumstance of the encounter between the deputies and Mr. Reinhold, and not to excuse or assign blame to either party.”

Barnes in the hours following the incident also acknowledged the timing of Reinhold’s death. The killing happened the same day Kentucky grand jurors opted not to level direct charges on the police officers who shot and killed Breonna Taylor, a Black woman and medical worker, in her own home.

Over the summer, Orange County saw an unprecedented wave of social justice protests against police violence toward people of color in the U.S. following the Minneapolis police killing of George Floyd.

Still, Barnes has asked critics, protesters, and members of the public in uproar over the incident to reserve full judgement until a full investigation has been completed.

“With the current state of police community relations, we should not tolerate attempts to inflame and drive a narrative that does not fully capture the context of this singular incident,” Barnes said in his statement, adding:

“The Orange County Sheriff’s Department takes seriously our responsibility to provide professional and transparent law enforcement services to our community. As your Sheriff, I commit to being forthright and transparent as this investigation continues.”

“And being Black should not get you killed in Orange County or anywhere in the U.S.”