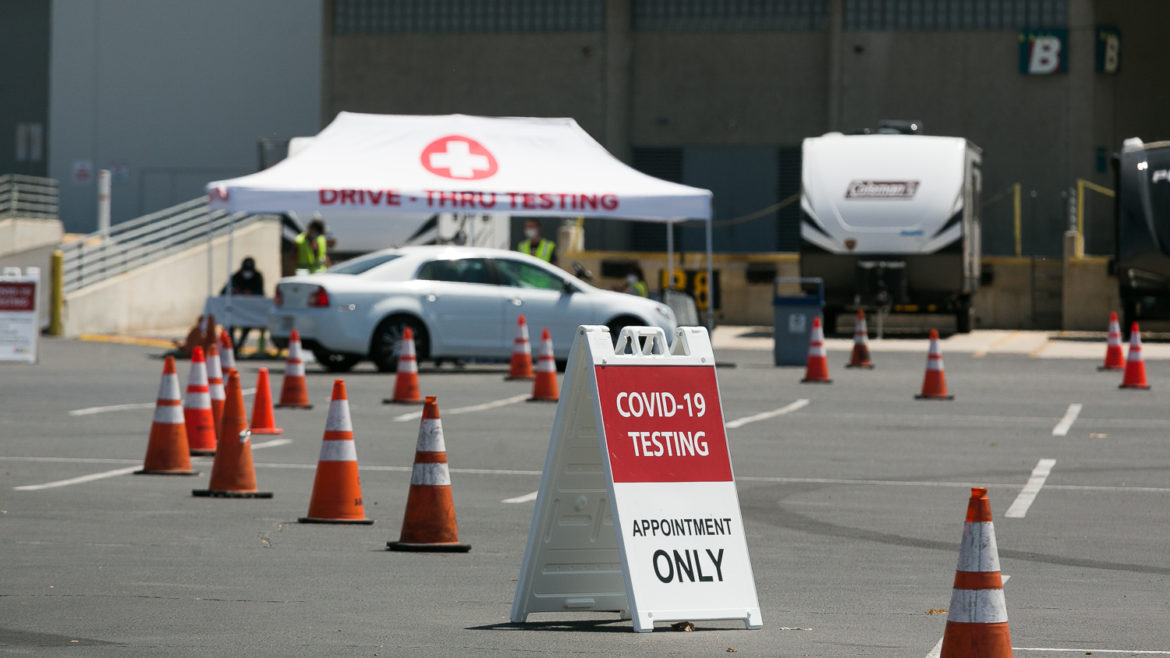 The Anaheim testing center on Aug. 12, 2020. School employees can get tested for the Coronavirus for free at various sites in Orange County.

Orange County officials say the county is moving in the right direction as coronavirus testing rates have started to drop, which could allow for more people inside businesses.

OC Supervisors also announced they will be taking action to boost food banks next week.

County health officer Dr. Clayton Chau said the situation is getting better because residents are overwhelmingly complying with public health orders — like mandatory masks and limiting the number of people indoors at certain businesses.

“I strongly believe that a majority, a large number of Orange County residents, are following, are complying [with public health orders],” Chau said. “That’s why we have the low number we have. That’s the proof.”

Orange County is indeed in a much better place than it was in July, when cases were spiking and over 700 people were in hospitals at one point.

The county has been in the Red Tier on the state’s four-tiered virus monitoring system since Sept. 8, which limits indoor business activity depending on what tier a county is in.

That means churches, restaurants, movie theaters and gyms have to limit the number of people indoors. If OC moves into the Orange Tier in the coming weeks, bars can open for outside operations and bowling alleys could resume operations.

One of the state’s metrics for moving into the Orange Tier is getting testing rates in those neighborhoods to less than 5.2 percent.

As of Thursday, Chau said it was 5.8 percent — down from 6.5 percent Tuesday.

Chau said officials will announce a new partnership Friday with a host of Asian American and Pacific Islander community groups to do similar community testing and education like Latino Health Access does.

Since the pandemic began in March, the virus has killed 1,391 residents out of 56,436 confirmed cases, including 31 new deaths reported Thursday, according to the county Health Care Agency.

Chau said some of Thursday’s reported deaths stretch back to June.

“I don’t know how and why that happened, but there is a delay in reporting deaths. Because it depends on where the person passed away,” Chau said.

Over 970,000 people have been tested throughout OC, which is home to roughly 3.2 million people. Some people, like medical workers, get tested numerous times.

At Thursday’s news conference, county Supervisor Michelle Steel announced that board supervisors will vote next Tuesday to extend an agreement supporting local food banks through November.

If approved, Second Harvest Food Bank and Community Action Partnership of Orange County could receive an additional $3 million in Coronavirus relief funding. The county initially approved a $3 million agreement in May with the nonprofits two months after the pandemic started.

Steel’s announcement came within a day of the Voice of OC reporting on a food shortfall that food banks were expecting to hit next month as unemployment remains high and government aid is dwindling down.

Second Harvest Food Bank has operated off their own fundraising for months at the start of the pandemic before they got government aid. To prepare for the shortfall they’ve been buying food and raising money.

“We’re not through the woods yet. Bankruptcies, defaults – all of that is just starting to happen,” Second Harvest CEO Harald Herrmann said in an interview Wednesday before Thursday’s announcement.

“It’s hard to predict. Hopefully the economy gets back on its feet and we start moving again. This is all about jobs, jobs, jobs, jobs and we’ve got to get people back to work. They’ve got to generate an income, so they can take care of themselves and their families,” he said

Herrmann said that the restaurant industry is predicting that 30% of their businesses will not survive the pandemic and that small family businesses are the ones most at risk.